You are NOT the Father! 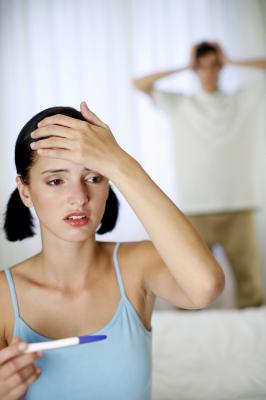 Now that the school year is over, and I'm officially on Summer vacation, I've had time to catch up on my favorite television show - Maury.

Yes, I have a college degree. Yes, I'm studying to be a minister. Yes, I have a wife and a daughter. And yes, I love Paternity Test Result Shows. And for all of you out there judging me - you obviously haven't seen it. This is the finest programming television has to offer. I'll explain.

In a sense, we are all faced with rationalizing something about our nature that contradicts who or what we want to be as decent human beings. This is one of the things that makes us human. And this is also why we are addicted to reality television - it helps us justify our own rationalizations. In a sense, we all have a little hypocrite in us. The difference between us and those on TV is that we're not broadcasting our stuff to the whole world. This is where the genius in Maury comes in.

Let's remember that reality TV has to be packaged in a way that it can be consumed. The bad reality shows don't last. The good reality shows have geniuses behind them, crafting and editing the scenes just right so that we, the stupified masses, don't know why we LOVE this stuff so much. Deep inside, we know it's wrong, but why is it so entertaining? There are different ways to package it, but I think that Maury's formula is what I mentioned last paragraph - PUT THE HYPOCRITE ON DISPLAY.

Who's the hypocrite? The woman, of course. First of all, who would go on national TV to find out something so dramatically life-changing and significant? Well, for our pleasure, the producers of Maury provide this delicacy a few times a week. Spare me about the erudite philosophies about the degradation of women. Of course, women are degraded in culture and society. But these Maury women are not guiltless, and some of them, I dare say, do this to themselves. Do what? For those of you who have never seen the show, picture this:

Enter Stage Left a woman looking either upset or despondent about the fact that her precious child (or children) have no active father, and that the man she KNOWS (watch out) is the father is a deadbeat jerk who is denying his responsibility. She waxes on about how great her child is and how great a mother she's had to be to this child because of her rough circumstances. She often gets adamant about the identity of the father, says that she is a 1000% sure (watch out), and Maury assists by putting a picture of the alleged father next to that of the child. She then goes CSI and points out the similarities of the features of the child and father.

Enter Stage Left a man, who is screaming and cursing the woman that he's not the father. After the obvious argument ensues, Maury finally lets us have the goods - the results of the paternity test that this man has willingly taken.

Now, there are times when the man is the father. The woman says "told you so" and the crowd jeers at the man. We don't like those shows.

No, we like it when Maury says, "When it comes to 16 month old ----, you are NOT the father." My spirit soars with joy at the climax of this moment. The woman runs off stage right crying. The man jumps up screaming "Yeeaahuh!" Maury goes after the woman backstage to console her, and she completes the ritual with the words, "I know who the father is NOW."

HAA!!! YESSS!!! You are an idiot! Why am I screaming at the television? Why do I like this? Why am I watching this? HEEELLLPPPP!!! AAAAAAHHHHHH!!!! I'm a sucker for this. See it works. Put the hypocrite on display - guaranteed ratings.

Maury Paternity Tests are the 4th highest rated daytime show - after beloved shows like Oprah and Regis & Kelly. Why else would the media concentrate so much effort into making President Bush admit he made a mistake? Because, we love to watch hypocrites suffer. We love watching someone make a fool of themselves because it feels as if it forgives all of the foolish things we've ever done.

But some of these Maury women go back not 2, not 3, but 12 times - AND NEVER FIND THE REAL FATHER. You may say, "how much punishment can one woman take?"

Tune in next week to find out.