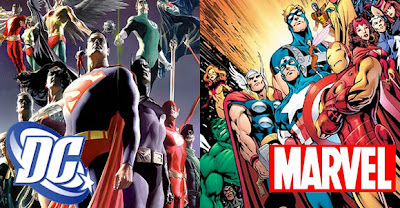 Here at TAOF, I talk about a lot of things, but by nature of the title of this blog, I have to occasionally reference one of my childhood hobbies - comic books.

OK, it extended beyond childhood.

Yes, I still wear a Superman "S" on my person almost daily (click here if you ever wondered why), and I'm often asked if I've seen the latest comic book or superhero movie adaptation - to which I respond - "Yes, duh!"

You: "Funkyman, you saw the Green Lantern movie?"

Me: "Because it's the GREEN LANTERN MOVIE!!"

The truth is I will see any and every movie version of a superhero because good or bad, it's worth it to me to see how people take the fantasy of both the written page and the painted page to the screen. And just like any book-to-movie transition - it can fail horribly. However, we learn from the failures just as much as we rejoice with the victories.

This summer, we've been treated to X-Men, Thor, Green Lantern and Captain America. Wow - 4 in one summer is certainly a milestone. Marvel has ruled this summer 3 movies to 1, and yes, this year they created the superior products (sorry Green Lantern). However, in the age-old debate of Marvel vs. DC comics - which is better? - let's extend the discussion to movies. So The Adventures of Funkyman presents:

In this corner - the DC Universe - lesser known independent titles like Watchmen have been critically acclaimed, but the iconic long-time heavy hitters are of course Batman and (duh) Superman.

In this corner, the Marvel Universe - home to the Hulk, the X-Men, the Avengers, and the big heavy hitters Spider-Man and Wolverine - who at one point surpassed Superman as the most recognized superhero in pop-culture - not too shabby.

Funkyman: OK, you two. Protect yourself at all times, make this a clean fight. Don't hit lower than the belt. When I say break, I want a clean break. In the event of a knock-down, you will be directed to go to a neutral corner. You are both professionals and I expect a good, clean fight! OK, touch gloves and come out at the bell!

Marvel: First of all thank you Funkyman for hosting this event. I would just like to say that Marvel has clearly been the fan favorite for decades. I'm not really sure why I'm even here.

DC: Um, hold up Marvel. We both know that there has never been a character more influential to ALL comic book superheroes than our Superman, so check yourself.

Funkyman: Wow, that's kind of true. I should probably go change t-shirts as to not show any bias.

Marvel: No man, you don't have to change. We love Superman. But don't forget what comic book captured your imagination as a kid - X-Men - which has little or NOTHING to do with Superman.

Marvel: Fine. Let's start with our most successful one - Spider-Man. Great movie, well-acted, had a great villain in Willem Dafoe, and grossed over 400 million dollars.

DC: Not bad, not bad. But have you heard of a little film called The Dark Knight? Best reviewed superhero movie in history, nominated for Academy awards, had Heath Ledger as the Joker, and grossed more than 500 million dollars.

Marvel: Whatever! In our 3 Spider-Man movies, we grossed over 1 billion dollars in 5 years. Your entire Batman franchise with 6 movies only grossed 1.4 billion over 16 years.

DC: Money isn't everything you know. We take pride in leaving a long-term legacy. Our Christopher Reeve Superman movies are the seeds of legend.

Marvel: Yes, and Superman III and Superman IV: Quest for Peace are the harvest of shame! Let's not forget your "nice try" with Superman Returns. I'm sorry guys but Christopher Reeve was great once, but Superman movies are over.

DC: Um, let's not talk about shame. I have two words for you: FANTASTIC FOUR. Next topic.

Marvel: Hold up! Let's not start throwing movie titles around. You wanna get nasty? Let's do this! How about Steel? What was Shaquille O'Neal doing? What were you thinking? How about Supergirl, or as we refer to it - SuperFAIL? What about Batman and Robin? Was that Arnold Schwarznegger playing Ice-Man? And Jonah Hex?!!!! Come on DC!!!! COME ON!!!!! IT'S OVER!!!

DC: Catch your breath!!! What about Ghost Rider partner? Or X-Men: The Last Stand - LITERALLY!? Or how about not one but 3 different dudes playing Incredible Hulk in less than 10 years. I thought the gamma radiation just made him change his looks from a man to a green monster. Looks like he changes form when he reverts to human form too! LOL!!! Eric Bana, Ed Norton, Mark Ruffalo - WHATEVER!!!

Marvel: You shut your mouth! Dude, you had FOUR BATMEN!!!!! 2 of them totally stank, and your second best was MR. MOM, dude!!!!! Don't talk to us about casting problems. How about making Academy Award winner Halle Berry do that silly Catwoman movie!

DC: Yes, right, because you guys treated her with so much respect playing STORM!!!!! Did she even have more than two lines in X-Men? Funkyman, are you even still here? Who's winning?

Marvel: Fine, well let me finish this. We had Spider-Man 2 - highly critically acclaimed, and set the stage for people to take notice of The Dark Knight as a serious film. Spidey 2 also had some of the best fight sequences in any action movie to date. We had X-Men 2 - widely regarded as one of the best superhero movies in history - from Nightcrawler's invasion of the White House to Wolverine's rampage through the mansion. We had Iron Man - a huge success and turning point for Robert Downey's career. We have the Avengers contiuum - with both financial and critical successes for Thor and Captain America this summer, not to mention more financial and critical acclaim for X-Men: First Class. We have other well-made less successful projects like Blade, and even though we also had Daredevil, Elektra, and two failed Punisher movies - our good FAR outshines our bad.

Funkyman: Wow, that was compelling. DC?

Marvel: Oh I'm sorry, DC, did I hurt your feelings? Don't give up so fast. You had Watchmen, right? And V for Vendetta, and Constantine?

Funkyman: Wait a second, were'nt all of those titles under the Vertigo label? I mean, they are a subset of DC, but I didn't know we were counting those films. To be fair, we would then have to consider Men in Black and Kick-Ass for Marvel, and . . .

DC: OK Stop! Actually those films you mentioned carried the DC logo, but that's OK. I see where this is going.

Funkyman: Ladies and gentlemen, this is an amazing day. I think we may have a winner. It looks like DC is conceding to Marvel in the movie business. Before I declare Marvel the winner in this epic battle, I will allow both sides one last jab.


For even more fun, check out The Adventures of Funkyman CD - 3 years in the making! Available now at iTunes! 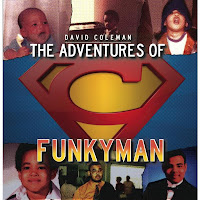 Posted by DavidColeman at 4:33 PM