How I Met Aerosmith 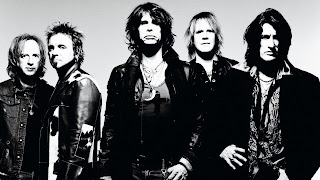 Today on The Adventures of Funkyman, we will actually have an adventure of Funkyman.  True story.

I have always been amazed at how life presents opportunities.  The things that you involve yourself with - if you do them from the heart and do them well - will take you places you could never imagine.  As Ashton Kutcher recently put it - opportunities look a lot like hard work.  Well, for me, hard work in college meant being a church musician on the weekends.  Who would have thought in a few short years after working in a church, I would be talking face to face with Steve Tyler and Joe Perry from Aerosmith about playing with them on tour?  Well here's how it happened.

- I came to Boston University to study music.
- My brother was already a student at MIT.
- He told me about a job opening for the MIT Gospel Choir.  I got the job.
- The former musician was the director of music at a church in Cambridge, and he offered me a job there too.
- One of the choirs at that church was an all men's chorus, where I met some men who were in another group of their own called Revelation.  I got to be their musician as well.
- Revelation sang in concerts all over town.
- The House of Blues in Harvard Square was created and they quickly established a Sunday tradition:  the House of Blues Sunday Gospel Brunch.  They were looking for local artists to provide the music.
- The coordinator of the brunch was an old church member most of the guys in Revelation knew.
- He came to one of our rehearsals to audition us, and he gave us a spot to be the music artist on one Sunday.

OK, caught up to speed?  So here I was, still in college, and working on the weekends as a church musician.  Next thing I know, I'm on stage at the House of Blues.  We sang two sets that day.  During the beginning of the second set . . .

Me:  "Hey guys, I think that's Steve Tyler in the audience."

Yes, Steve Tyler and Joe Perry were having brunch at the House of Blues that Sunday.  So what did I do?  I PLAYED THAT PIANO LIKE IT WAS THE LAST TIME I WOULD GET A CHANCE.

I mean, I always played with enthusiasm.  It's gospel music for goodness' sake.  However, I admit to being a little self-centered thinking that these special audience members might notice me.

After our set was done, they both came right to the stage, shook my hand, and said "Man you're amazing."  I almost died.

Never one to miss an opportunity, I said "Hey do you guys need a keyboard player?"

They said, "No but thanks."

Hope I didn't lead you on to think I actually got to play with them on tour.  Yeah, that was my brief introduction and even shorter farewell with the world famous musicians from Boston.  However, it's still a cool story, and it at least taught me that if you do what you love and do it well - AMAZING things and people are possible.

And you know what?  That chance to play with them on tour may still happen.  You just never know.  Back to my hard work . . .

Fat loss men and women appear, people can specify each one of these a particular exercise.Needs related to within video game content material will probably be talked about together with the End of the world Preppers tv technique. Extra written content can also be ordered via in iphone app buying.Doomsday Preppers airs to the National Topographical Option.
Fifa 15 Ultimate Team Coins

You have a very nice blog

Thanks for this I understand some but not sure... I am going to ask one question that I am using Anchore text in About Me box,PAkistani Chat Rooms Comments and also in Article submission. Is its right or not...? if not right then Can I add just simple link Online Chat Rooms or any other link in About Me Box Comments or Articles...? Please reply me that may I can change my SEO... thanks again :)

That is to say you can buy WOW Gold through Paypal and there is no allegation for email or buzz confirmation.Best WOW Gold sale