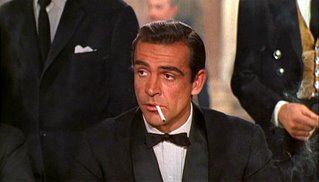 Last night, I had a James Bond Tribute Concert. I watched all 20 Bond films again and took clips from the movies to make a montage that the audience viewed while we sang theme songs from 8 Bond films. This reviewing of the Bond genre was revelatory in that I uncovered a layer to these films I never noticed before.

Some people think the James Bond books and movies are about international spies, violence, beautiful women, high-tech gadgets, and amazing chases and stunts. But really, Bond is all about the kids. Let's examine how Bond has been misread and misunderstood for 45 years.

Dr. No - A crafty metaphor for positive reinforcement in your children. Wake up, parents!

From Russia With Love - Teaches us that love really is the answer, EVEN during the Cold War. (cue John Lennon) "All we are saying is give peace a chance."

Goldfinger - Taught me that the ability to do wonderful and great things lie right in my own hands. I make it happen. Gold-finger. Thank you Odd Job.

Thunderball - A great game for children age 5 and up. Originally called "Thumperball," this game was going to be featured in the movie Bambi, but the Albert Brocolli agency bought the rights and then changed the name to spite Disney - never including the actual game in the Bond film. Man, show business is fierce.

You Only Live Twice - Actually, you only live once, but when children hear this message, it makes them feel like they can screw up just about anything and get a second chance. Come one people, read between the lines!

On Her Majesty's Secret Service - A fancy anagram for children - "OHMSS" - commonly used in meditation to calm children down.

Diamonds are Forever - Your children are precious jewels. Treasure them forever.

Live and Let Die - I know. You're thinking - "Spin that one, Funkyman!" Well, I'll have you know that the English commonly spell the word "dye" with an "i." This title is supposed to be about the fun of making Easter eggs. So there.

Moonraker - A cute story about how even children on the moon have to do yardwork. Man up kids!

For Your Eyes Only - You can actually watch this Bond film with the sound down and still understand what's going on. Thus the title. Kids get to be creative and make-up their own dialogue. Ingenious.

A View to A Kill - Many people miss this modern update of the Passion of the Christ. Think about it, Christopher Walken is Jesus, Grace Jones is Peter, James Bond represents Pontius Pilate sent by the government to see about this radical . . . Hello? McFly? Why am I the only one who gets this?

The Living Daylights - Originally titled, "The Dead Nightlights," this was Bond's attempt at making a more family friendly title. It worked. Too bad Timothy Dalton didn't.

License to Kill . . . Timothy Dalton for making a sequel. (On a side note, I don't hate this movie. It's just fun to make fun.)

Goldeneye - A powerful affirmation statement every young person should say everyday. "Golden. I." or if you're from Oakland "I Golden."

Tomorrow Never Dies - A sentiment popularized by Annie in the famous Broadway musical. "You're always a day away."

The World is Not Enough - About the afterlife. Christians flocked to the theater for this one.

Die Another Day - A lesson in procrastination. "Easter only happens once a year, young lady. If you missed it this time, you'll have to dye another day."

Well, there it is. The 20 original Bond films have been misconstrued as misogynistic drivel for pre-teen boys. Now I've set the record straight. And if you're a Bond fan going what about "Casino Royale" and "Never Say Never Again?" Don't be silly.

Those films are about gambling and pimping.