I Support the Cool Troops 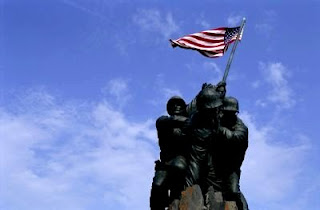 Hey! I'm bizzack. I know you missed me. I missed me. I told you it would be some time before I would be able to write again, but for all of you thirsting for Funkyman lists, you're in luck this week.

On July 3, I will be in Washington, D.C. at the Pentagon to witness my older brother, Wisdom, get promoted to the rank of Commander in the U.S. Navy. Sound cool? Enough said.

1. Every war in the history of man has been in some part waged, fought and won by armies on foot.
2. It's easy to blow someone up from air or water, but how about hand-to-hand? That's a real man (or a scary woman).
3. Size doesn't matter. If you have a better-skilled army and/or craftier leaders, you will win battles. (See "300," "Battle of the Light Brigade," "Gideon," etc.)
4. Elvis was in the Army. (Wait is that something to be proud of?)
5. When you list the armed forces, Army always comes first. Must be a reason!

1. 75% of the Earth may be covered in water, but 100% is covered by air.
2. Simplest argument resolution - If I don't like the way you look at me, I'll drop a bomb on you! Deal with that!
3. Air Force just sounds cool. It doesn't work with the others: Water Force? Ground Force? LOL!
4. Can lead to a very lucrative career in commerical airlines.
5. President George W. Bush was in the Air Force. (O.K. 4 good reasons.)

1. Has the coolest motto - Semper Fi! (translated from the Latin meaning "Always Fi." - cool!)
2. All of the coolest war movies have focused on Marines, except for ironically "The Marine," which is pretty much life suckage.
3. By far the coolest commercial tagline - "The few, the proud, the Marines."
4. The absolute coolest and nicest formal uniforms of the armed forces - the black, the gold, the red. I want a Marines uniform, too. I just don't want to do the basic training, missions in other countries, serving my country with a gun, and you know . . . earning it part.
5. 4 of our reasons have the word "coolest" in it. Oops, make that 5.

My condolences to the families who have lost loved ones in the war. My thoughts and prayers are with the geniune soldiers of all countries. Come home boys and girls. Come home.