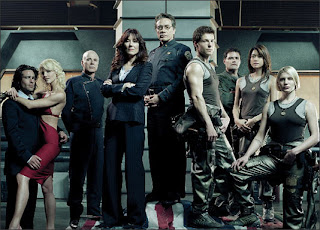 Ah, school is nigh. Soon you won't have to wait so long for a Funkyman blog update. I'll be back to the glorious freedom of weekly study halls, and my fingers will do the walking. What have I been doing in the meantime? Catching up with one of several amazing television shows that I have missed - Battlestar Galactica. What are the others I would like to catch up on?

Actually, I've never seen one episode of any of those shows. How's that possible, ye duke of pop culture? Well, I know that when something is good, it's best ot watch from beginning to end. Of course, you have to wait until after the beginning to know it's good, and by that time, it's too late. A small price to pay, I think, for the 95% garbage that's on television. That's why we have and love . . .

DVD'S - Thank you Lord. Putting these series on DVD immediately available to the public is the best thing to happen since the invention of the DVD. I love the fact that I can watch LOST on DVD and catch up to every episode from two years in the space of a month. And that's how we like our television - on our time - not with commercial breaks and cliffhangers that leave you hanging often for weeks while they replay old episodes after sweeps week.

I've been faithful to LOST ever since I caught up. Because of online episode viewing, I've been able to be faithful to HEROES. Now, it's BATTLESTAR GALACTICA's turn. I have to say this show is beyond good, and the premeditated plotlines are highly appreciated by this LOST fan who knows the writers are spinning their wheels week to week. However, even with its flaws, LOST remains an amazing experience. Which brings me to the subject of this blog.

Why is TV better than Movies?

For every reason, a movie should be a better experience than a TV Show.

1. There's a bigger budget - More money should equal better talent, the best special effects, more incentive to make more money
2. There's more planning - Movie projects have months and often years for a writer and/or director to formulate a great script and how to shoot it. The careful planning is essential to keep reason #1 in check.
3. Bigger Audience - More people see a blockbuster film in one weekend than a month's worth of television. Your audience is ready and waiting - blow us away!

However, we have learned that time, money, and hype do not always equal a great movie experience. In fact, it's those numerous failures that I believe have turned great actors and directors away from Hollywood and towards the small screen medium.

Do you remember when The Sopranos came out? The reviews were unparalleled. People couldn't believe something of this quality was even on television, much less the movies! HBO's subscriptions skyrocketed. Finally, something entertaining and challenging to watch! I believe this was the forerunner to several great shows, like those mentioned above. Writers began thinking outside of the box and giving us the original ideas and writing that we were starving for.

So how come that hasn't leaked over into Hollywood? Yes there are great indie films and the occasional Hollywood film that pleases, but in general, movies are predictable and often a disappointment. Especially at $9.75 a pop!

I don't know the answer. But I do know that I don't care as long as TV is this good. I haven't been to the movies much this summer at all (though I'm dying to see the Bourne Ultimatum). Thank you creators of Battlestar Galactica and Blockbuster Video. You have given me something to look forward to everyday on TV. I'm doing two episodes a day.