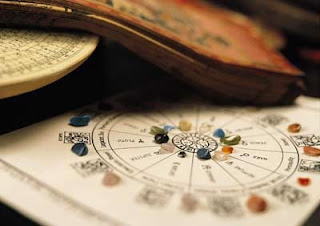 I am a Pisces, and since I was a child, I've marveled at how accurate astrological signs are to a one's personality. Does it dictate behavior? No. Can they be off? Yes. But there's got to be some truth in this study of humanity that has lasted so many years. Since 2,000 BC to be exact.

While I think it is silly to read a horoscope and plan your day accordingly, there is a real logic to the theory of astrology - that the celestial planets and moons above are somehow in sync with life here on Earth. It doesn't matter if you believe in God or believe in science or somewhere in between - astrology answers and supports all points of view.

To the spiritual person - You believe in a God or a spirit that is more powerful than yourself. You also may believe that things happen for a reason, and that we are all connected in some way through that God or spirit. Astrology is the exact same theory. Could it be possible that connectivity doesn't end here on Earth?

To the atheist/pragmatist - You believe in the scientific method and logic. You may know that mood swings and personailites can be altered by the fluctuation of fluid in the brain. You probably know that the tides and the oceans are dictated by the proximity of the moon to the earth's orbit. Well, if the water on Earth is changing with the position of the moon, could it be possible that the water in us is changing as well?

Anyway, look up your zodiac sign and see if what it says is true for you. Maybe it does or doesn't. It's interesting nonetheless. Here's some random thoughts about people and their signs:

1. As a Pisces, I have had several musical inspirations while either in water or surrounded by it. I have written some of my best songs in the shower or while swimming ("Well Done," "Girls Can Fly," "In Love Again," "Yes"). It's true.

2. Every Leo I've ever met is a bold woman with a strong personality that attracts others. (Hey Eva and Kristin!).

3. Every Taurus I've ever met is very strong willed and likes to do things their way (including my 3-year old, daughter, but then again, that's all kids isn't it?)

4. Every Aries I've ever met lives for the thrill of the moment and likes to lead the way for others (Hey Wis!)

5. The Fish That Saved Pittsburgh is a really, really silly movie about how everyone on this NBA basketball team was a Pisces and they hire an astrologer to help them win games. Starring Dr. J - ouch! (Space Jam was much better.)

6. Scorpio is NOT an Al Pacino movie. (See Serpico)

8. Libra is NOT a half-lion, half-zebra cross breed. (See "liger" in Napoleon Dynamite.)

9. Gemini is NOT a cricket in Pinnochio (OK, that's a stretch).

10. You will NOT get Cancer if you eat crab. (Wow these are getting bad.)

12. Capricorn is NOT a Halloween candy. (David, come on. Stop now!)

Obviously, I'm out of ideas for this blog. Isn't it sad to see the creativity just slowly leak out of my fingers like that? More next week!