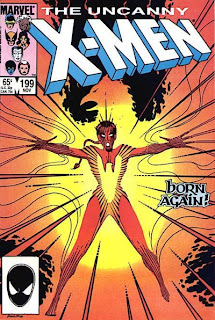 I am preparing to do a magnus opus.

I have been collecting comic books since I was a pre-teen. My favorite title was the Uncanny X-Men, not to be confused with the X-Men, X-Factor, New X-Men, Astonishing X-Men, X-Force, X-Man, X-Men Unlimited, The New Mutants, X-Men Unleashed, X-treme X-Men, or Ultimate X-Men which actually is a good book too, but I digress. A friend got me into comics one summer when I was at Children's Theater. I spent a couple of summers there, participating in theater productions put together by and starring kids. It was a great time, though it's also where I first began to learn how to curse, but again I digress.

My younger brother, Anthony kept the torch alive when I left for college and was truly unable to sustain the faithfulness to the succession of every issue of Uncanny X-Men. He was also an avid Spider-Man fan - Amazing Spider-Man, not to be confused with Spider-Man, Peter Parker the Spectacular Spider-Man, Web of Spider-Man, Friendly Neighborhood Spider-Man, Sensational Spider-Man, Astonishing Spider-Man, or Ultimate Spider-Man which is a really good take on the character, but I digress. He kept the comic book collecting going for years while I was away.

When he went to college, it pretty much ended there. All said and done, we collected hundreds of issues of X-Men and Spider-Man along with hundreds of other random titles, mini-series, and limited editions of other titles. (Can't forget Superman!)

When I began teaching full-time after graduate school, I found myself perusing comic book stores, and finally with some extra cash to spend, started getting back into buying random titles that looked promising (lucrative) or just interesting (Teenage Mutant Ninja Turtles - who knew?!). I subscribed to Wizard magazine which is the editorial of note for the comic book industry, and rekindled my love for this genre. Since then I have amassed a few hundred more books - which brings us to the present.

My mother has recently cleaned out the remains of our childhood lives and has sent north my ENTIRE comic book collection in boxes. We had bagged and boxed the comics long ago, but they are not catalogued or in any order. Therefore . . . My brothers and I will attempt to organize this massive pile of comic books in a couple of weeks. Good times!

Here is a list of my favorite comic book stories. If you're not a geek, you should probably stop reading right about now.

10. Secret Wars - Every hero and villain from the Marvel Universe disappears from their own titles, POOF, literally at the end of each of their respecitve issues, and are taken to a planet that only exists because it's been created from shards of several hundred different worlds. Who could do such a thing - the Beyonder - a character so powerful, the only comparison could be to God Himself. He's bored and wants to watch the villains and heros form teams and fight each other to the death. Doctor Doom, however, finds a way to steal the Beyonder's power and with a flick of his wrist, KILLS all of the heroes in one blow. YES! Isn't that what you would do? There was no, "HA! Bow to my superior power!" or "I bet you're wondering how I did this. Well, let me tell you since you are doomed anyway" NONSENSE. Killing your enemy should be priority number one if your a super villain. Get it? A SUPER villain? Doctor Doom is the real deal.

9. Watchmen - Soon to be a major motion picture, this was a groundbreaking comic because it was quite literally a novel and not just a graphic one. As the detective story unfolds - the world's superheroes are being killed one by one - in between chapters we read diary entries, newspaper editorials, and other creative text that tell layers of the story not seen in the panels of the artwork. It's amazing. Also, none of the "super'heroes have supernatural powers. They're normal people who put on costumes in order to do good. However, we find that the villain responsible for the murders is actually one of the heroes who is planning to kill millions of innocent people in order to, get this, create world peace! And guess what? HE DOES IT! Do you see a pattern here?

8. Infinity Gauntlet - There are five gems out there in the universe that when they come together give the person wielding the gems limitless power, making them quite liteally God. Thanos achieves this feat and to amuse himself, allows all of the superheroes to attack him. He decides to be fair and only use a fraction of his power, just so he can enjoy killing them, which he DOES. HA HA HA HA HA! Gotta love it. You must think by now, I'm rooting for the bad guys. I'm not, but it's fun to watch them win sometime, even if it is for a short time before the heroes find some miraculous way to come back to life.

7. God Loves, Man Kills - This was the graphic novel that turned me on totally to comics. It's an X-Men story that introduces the political and social themes of racism, discrimation, martial law, ethnic cleansing, etc. The X-Men are targeted by politicians to be outlawed and feared by the public. This is the book that inspired the story you've all seen in the movie versions. Great story and great book - not your father's superhero story.

6. Dark Knight Returns - I'm sorry but I never liked Batman . . . until this book. Kudos to Frank Miller - yes the creator of Sin City and 300 - for reigniting the Batman mythology. This Batman does not say POW! BAM! BOOM! like the campy TV show or run around fighting petty criminals and stopping bank robberies with Robin. This Batman is old, tired, and injured . . . and he still can kick butt! Gotta love it. Very dark book, but that's exactly what makes it cool.

5. Superman Returns - Nothing like the Batman reboot. For those of you who follow comics, Superman was killed in 1992 by Doomsday. Yes, that's right - killed. After his death four new Superman-like heroes emerge - Steel, (the new) Superboy, the Eradicator, and a cyborg that turns out to be Metallo. The cool thing is that they all claim to be Superman reincarnated and the public is divided with their favorites and their opinions of who is the real Superman. Of course, none of them are, but as the story ends, the real one comes back to life - don't ask me how - and destroys the evil Metallo. Corny solution but cool finish.

4. Dark Phoenix Saga - The ultimate X-Men story. If you saw the X-Men 3 movie, you know this plot. Jean Grey, a psychic, unleashes an alternate personality who basically is capable of limitless psychic power with the potential to kill entire worlds. AND SHE DOES! Need I say more?

3. Origin - For decades fans have been clamoring for the origin of Wolverine - who is he, how old is he, and how did this happen to him? What a great story of rich family living in a mansion with servants living in sheds out back. The rich family has a sweet, harmless little son and the gardner has a rough-Wolverine looking son. Long story short, when the drama goes down, it's not the servant's kid that rips out claws in anger - it's the sweet little rich boy. To me, this was the ultimate plot twist, and I did not see it coming. And now, you won't either. Sorry.

2. Kingdom Come - Like Dark Knight Returns, this is a vision of Earth in the future, where Superman, Wonder Woman, and Batman are all aged into their late fifties. The world has gone crazy and the younger superheroes don't get along and fight for selfish reasons. The old heroes saddle up once again to teach the world about truth, justice, and the American Way. Lots of cool homages to the legacy of these three heroes, especially Batman, who gets to steal all of the scenes because he's the billionaire, sarcastic genius. A lot of fun.

1. Rising Stars - A mysterious ball of energy appears above a small town. The 150 children that were in vitro at the time are then born, all exhibiting superhuman powers. These 150 kids are quarrantined and raised under governmental supervision. As they become adults and attempt to assimilate into society, someone begins murdering the heroes. But the cool part is, everytime one of them dies, the remaining heroes absorb the deceased's energy. Energy cannot be created or destroyed, right? Imagine if 10 die, 50? You get the idea. This is one of the best stories I've ever read - lots of characters, lots of great battles, a murder mystery, and a genius conclusion that really wraps the story up. What happens? You'll have to read this one yourself. I have a copy if you want to borrow it.