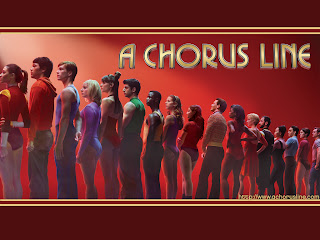 Hey there Funkiites, I'm back with another installment of my favorite music. So far, we've done pop from the 80's, greatest albums, and classical. It's time for . . . MUSICAL THEATER.

Now look, if you've been reading the Adventures of Funkyman long enough, you know that I love musicals, but I haven't really talked about specifically which ones and why. So without too many opening jokes (sorry the monologue is weak this week), here they are!

11. West Side Story
Hey this is a top ten list, Leonard Bernstein and Stephen Sondheim! Better luck in the top 20!

10. Rent
O.K., truth be told, I've never seen Rent. Calm down! "HOW COULD YOU, FUNKYMAN, NOT HAVE SEEN RENT???!!!!" Believe me, it's possible. Not that I haven't had the chance. I actually have it DVR'ed at home just waiting for me. Anyway, I had to include it because in this generation, what musical has had such an impact on the world? Though I haven't seen it, I know almost every song because I'm a choral director and I've had hundreds of students sing songs from the show, whether as solos, duets, or as a chorus. Though I do not believe the songs are as amazing as I want them to be, they are top notch, and you have to hand it to Jonathan Larson for writing a pertinent opera for our times. Much kudos.

9. Ragtime
Unstoppable musical about the turn of the century and the problems faced in America. Beautiful music and immortal performances by Audra MacDonald (coming to Tufts on February 9!) and Brian Stokes Mitchell (who came to Tufts last February!). "Wheels of a Dream" makes you proud of America. "Make Them Hear You" makes you remember America's not perfect, but proud of people who fight for what's right. It's a monumental piece that must be seen.

8. Fiddler on the Roof
Timeless musical about the daily life of a Jewish family living during difficult times. The songs however, are far from sad - "Matchmaker," "If I Were a Rich Man," and "L'Chaim" are some of the most popular songs EVER and always make you smile. My favorite is "Tradition" which is the opening number. It's a great song with an ethnic pulse and a great full cast number. Definitely check it out.

7. The Music Man
This is on the list probably because I had HBO as a kid and this was on like every other day. I must have seen this movie a million times. Robert Preston is the con-man who comes to River City to sell the citizens band equipment, posing as a music expert, when in truth he knows nothing at all. This is quite the oxymoron being that he steals the show in every scene - acting, singing, and dancing. Don't miss 5-year Ron Howard singing the "Wellsth Fargo Wagon." Hilarious and cute. This musical has so many famous songs, I don't have time to list. But it is one of my favorites of all time.

6. The Sound of Music
O.K., who hasn't seen this? Well, until two years ago, me. I've always avoided watching it on TV because it's like 4 hours long! However, it's shown every year like clockwork on network TV. Finally I rented it (I had to do it commercial free) and I realized why everyone loves it so much. Julie Andrews is amazing and the songs for this show are brilliantly crafted. "Do-Re-Mi" is about one of the greatest musical arrangements in history. Surrounded by a depressing vision of Nazi Germany invading Austria, the story of the Von Trapp family (true story) is inspiring. Good stuff.

5. Joseph and the Amazing Technicolor Dreamcoat
Andrew Lloyd Webber had to make it on to this list somehow didn't he? I mean I couldn't put Phantom or Evita or Jesus Christ Superstar or Cats right? Well those are good, but what pulls my heartstrings is the operatic, non-stop music of Joseph. Maybe I'm partial to the fact that it's a Bible story I love, I don't know. There is a wide range of musical styles in this show and they're all catchy. There's not one song in thist show that you can't hum, and that is an amazing feat. Hats off to Mr. Webber for making a show that EVERYONE can watch, even my daughter.

4. Grease
O.K., how much did I want to be John Travolta as a kid? "I got chills, they're multiplying! And I'm loooosing control!" Oh my goodness - so cool. Why is every song in this musical a classic? This musical must be good because we all overlook or ignore the misogynistic, sexist themes prevalent throughout the story (i.e. Girl changes her hair, clothes, and image in order to appease the insecurities and failures of a man who wants her). But we forget about all that when we hear "Go Greased Lightning, burning up the quarter mile" or "Rama lama lama ka dingity ding de don." Fun is fun. Gotta love it.

3. Wicked
As you may know, I just saw this recently, and I was just blown away. Stephen Schwartz is a great talent, and he wrote some of the most memorable songs ever for this show. It's a great show for women, for there are no real showstopping numbers for men, but who cares? "Popular" is brilliant and hilarious. "For Good" has everyone in the theater weeping. And if you're not on your feet cheering out loud at the end of "Defying Gravity," you're dead. Stephen Schwartz, by no coincidence is also the composer of . . .

2. Pippin
"We've Got Magic to Do" is one of my favorite show songs ever. Ben Vereen had this part written specifically for him, and the combination of 70's rock and soul with his voice is magic. "Corner of the Sky" is every egotistical maniac's anthem, including mine. And "Finale" is just an awesome . . . well . . . finale. This is a great show that covers the gamut of education, murder, politics, religion, sex, and war. The 70's were a great time for the theater, especially for my number one pick.

1. From Justin to Kelly
Just kidding!

1. A Chorus Line
This is number one because this was the show that made me want to be a professional musician. When I was in high school, I became obsessed with Marvin Hamlisch's songwriting, largely sparked by the viewing of the 80's movie version of this show. Of course, most know that movie is blasphemous to the stage show, but I digress. When I bought the original soundtrack, I fell in love especially with the opening number - "I Hope I Get It." I did think it was quite ingenius to write a show about a show. But the music and dancing are so good because only real dancers and singers could play these roles and these characters that are so naked on stage as they bare episodes and secrets about their private lives. Seeing them all stand at the edge of the stage, as we the jury judge their value, makes me value the power of the audience. These characters, songs, and dances are nothing without an audience to appreciate them. This show makes you feel like you're integral to the success of the show.

Well, that's my riff for this week. Next week - ROCK!

Ok David. I like the list...apparently I need to get out more and see more shows. However, you left off a favorite of mine with GREAT music - Into The Woods...curious as to whether this was even in consideration. As the sole reader of this blog, I think I deserve an answer. -Shaunielle

True, Into the Woods is great music, but it suffers for me because it's mostly solos. I like big shows with choruses and dance. You will notice that every show on my list meets that criteria. There are so many musicals - The Fantasticks, She Loves Me, Chess, etc. that I love, but they don't provide the whole entertainment experience - larger than life - like these other ones. Thanks for being my only reader!