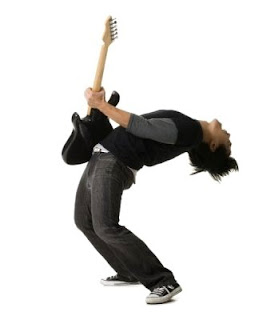 A girl asked me once, "Do you just listen to rock or do you REALLY like it?" I would never hit a person, but this was an instance where I would have considered it. What kind of question is that? Well, I'll tell you.

This was during the early 90's when there was a newly raging battle between alternative rock and hip-hop as the "cool" underground movement. You could see it in the pop charts as well. One week, rock was on top, but the next week, a rap song was #1. I thought this was a good thing, but some viewed it as a cultural battle, and some even considered it a racial one. Bottom line was - black people like rap, white people like rock. Of course, we both know that's LUDA! (I'm not helping, right?)

Flash forward to today - Rap won. Hip-hop has taken over the culture, and rock has been desperately trying to find a niche of listeners again. But don't worry rock. I never left you, and I've always loved you. Today, I dedicate my blog to my 10 favorite songs to rock out too. I love hip-hop, but there are some things rap can't do. By the way, this list is not in order. It was hard enough picking 10. Now you want me to rank them?! You're so demanding! Here we go!

"Into the Void" by Nine Inch Nails - "Tried to save myself, but my self keeps slippin' away." Great refrain for a great title for a great song by a great group. Trent Reznor - mentioned in this blog before - is nuts, in a good way. This song is ridiculous, it's so good. Starting with bells and cello, then a disco beat, then a nasty bass line, building to a crescendo of vocals, guitar, and sound effects that near reaches chaos - all the while funky, funky, funky. Pure gold. Download this now. If you don't like it, I'll pay for it.

"Back in Black" by AC/DC - O.K. who doesn't love this song? Is it because the riff is so good? Is it the screaming vocals? Is it because it's funky? Yes, but no. It's because the producer, Mutt Lange (Shania Twain's husband) is a genius. The reason the riff, vocals, and funk sound so tight and good is his fault. We blame you, Mutt! Thank you!

"One Vision" by Queen - This is a group with so many amazing songs, it's not fair to choose one, but as far as rocking out potential goes, I have to give it to this song. You may know this song from the 80's movie "Iron Eagle." "One flesh, one bone, one true religion, one voice, one hope, one real decision." Great groove, amazing guitar solo, and cool drum bridge. They say "one" so much that they end the song "Fried Chicken." Hilarious.

"Nookie" by Limp Bizkit - Hip-hop influenced rock. Haters can hate, but you KNOW you were bobbing your heads to this. Yes, they got annoying. Yes, the song got old. But Yes, the song kicks. Deal with it.

"Fear" by Disturbed - How many rock groups claim Method Man as one of their influences for vocals? I don't know, but this group is amazing. So tight. This song starts simple with a drum track and then about 15 seconds in KICKS IN HARD and then never stops. Great example of hip-hop influenced rock that doesn't sound like hip-hop influenced rock. If that makes any sense.

"Longview" by Green Day - Green Day's first smash hit was on their third album. It took them a couple of albums to get it right, but man is this right. "Bite my lip and close my eyes. Trippin' away to paradise" is a great hook and the band breathes together on those chords. Add Billie Joe's fake British vocals, and you have pure rock delight.

"Ted, Just Admit It" by Jane's Addiction - It was Nirvana's "Smells Like Teen Spirit" that introduced the 90's to the "song sounds nice/song goes nuts on the chorus" format. They did quite a few more like that, and many other bands were influenced (i.e. Blur's Song #2, Limp Bizkit's Nookie, Green Day's Longview, see a pattern?). However, Jane's Addiction, probably one of the most creative forces in rock in the 90's had a grander idea - one long build-up. This is more reminiscent of classical music or even jazz, and it will feel that way as you listen to this song about mass-murderer Ted Bundy. It couldn't start off simpler - drum and bass, nice and slow - and it couldn't end any crazier - super fast everything and a refrain of "Sex is violent!" It's even crazier live, which I can say I had the fortune of seeing. An amazing song that's not for everyone, but inspires awe in me every time I hear it.

"Lakini's Juice" by Live - Can an orchestra rock? Yes it can. Download this dark song named after the Hindu goddess of destruction. "LET ME RIDE! BURN MY EYES!" The orchestra is uplifting and amazing on this song. Stay with it until the end to get the full effect.

"Abracadaver" by The Hives - Probably my favorite rock band alive right now. These Swedish rockers have mastered the 2-minute garage sound and they perform at such a high level, it makes everyone in the audience smile. You have to see it for yourself. Click here and watch "Main Offender." You will not be disappointed.

"How I Could Just Kill a Man" by Rage Against the Machine - Yet another group with so many rocking songs, it's hard to choose. However, the Renegades album featured their interpretations of rap songs. This song, originally created by Cypress Hill gets a complete face lift. It rocks so hard that it's a crime.

Honorable mention: "Enter Sandman" by Metallica, "Welcome to the Jungle" by Guns N' Roses, "Lithium" by Nirvana, "Jeremy" by Pearl Jam, "Just Another Victim" by Helmet & House of Pain, and pretty much every song by Tool.

What, no Stairway To Heaven? (HAH)Ok, some comments:

You mention Queen, but not Bohemian Rhapsody?

Does popularity kill the submission? How about Sledghammer from Peter Gabriel or Shaking the Tree?

Pink Floyd, The Wall: In The Flesh (rocks pretty hard)

If you are going to include AC/DC - how about Aerosmith Walk This Way?

For oddball songs that no one has ever heard, but was a kick#@! song, The Dambuilders, Louisiana.

Dire Straights - again highly commercial, but Money For Nothing was pretty good on the scale. (I prefer Telegraph Road - but that doesn't seem to fit on this list)

Of course, being an long time Who fan - hard to ignore Quadrophenia - Dr. Jimmy or 5:15. Or the old standby Won't Get Fooled Again. But that's not my favorite from them.

Tought to come up with a simple list. Too many choices.

Yes Jason, all good suggestions. However, I offer the following:

- While Bohemian Rhapsody is probably Queen's most famous and arguably greatest contribution to music, it takes too long to rock out. I need my rock to rock beginning to end. This would have been on a top 10 of greatest genre-crossing songs, maybe even #1.

- Popularity had nothing to do with my list, except for the Dambuilders (see below). I love Sledgehammer and Shaking the Tree, but that's more funk, not rock.

- As you may have read, The Wall is my favorite album of all time. However, this particular cut does not rock me as hard as the ones on my list. It's personal.

- Walk This Way does not rock as hard as Back in Black - come on!
I love Aerosmith, but I don't throw up the sign of the devil, stick out my tongue, and bang my head to Walk This Way.

- Louisiana would have been song #11. I didn't put it because no one would have heard of it, but you are so right.

- Money For Nothing grooves, not rocks. Best groove ever, though.

- I left The Who completely off of the list, because I've never been a big fan or expert on them, though I know that's sacrilege to your ears. I have the utmost respect, but I never fell in love with them.

- You're right that this list is tough. Thanks for your submissions. I would love to read someone else's lists, though beware of the time consumption!

It's important you look at this: http://ccinsider.comedycentral.com/cc_insider/2008/07/rush-plays-rock.html