Greece is the Word 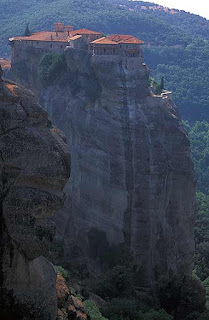 Hello Funkiputians, I am in America again! (cue James Brown)

"Living in America - got to have a celebration! Owww!"

I was fortunate enough to tour Greece for a week on a concert tour with my Chamber Singers from the Dana Hall School. They sang a couple of concerts and we saw a lot of the country.

There's nothing like visiting another country to make you appreciate . . . what you truly hate about your own. Thought I was going to say love, huh? I do love America and its many freedoms. But while in Greece, I learned some important lessons that make me realize more what we have to work on here.

1. Health Care - My daughter got sick while in Delphi. She's allergic to sesame seeds, and we found out the hard way. As she was close to an anaphylactic reaction, we were fortunate enough to have our tour guide escort us to the hospital and translate for us. She got a shot of Cortizone and was almost immediately better. The doctor gave us a prescription for two medications and we were on our way. The medication - $6 combined. The hospital - free. Need I say more?

2. Yogurt - I eat yogurt everyday for breakfast. I've tried them all. Greek Yogurt tastes like you're cheating, but you're not. Quite an indulgence. Their lemon yogurt tastes like an honest to God lemon meringue pie filling - not a Nutrasweet tease. I was quite impressed.

3. Heroes - Yes we have George Washington, Abraham Lincoln, Dr. Martin Luther King Jr., Al Sharpton, and Imus. Quite a cadre of talent yes? Well in Greece they have a few unknown heroes like, um, I don't know . . . HERCULES?! ACHILLES?! LEONIDAS?! THIS . . . IS . . . SPARTA! The original "I Have a Dream" speech. Beat that America. I know you're saying, "But Funkyman, those are legends, not factual history." Well, maybe, but their legends outshine our actual history. I'm sure you'll agree.

4. Monastaries - Yes, we have them here too. But how about built atop 1500 ft. rocks? Sides of mountains? Pictured above, one of the many monastaries of Meteora - buildings constructed over 700 years ago using God knows what lift and pulley technology they had, but it was dangerous and even for our standards today, miraculous. Single-handedly the most impressive thing we saw there.


Right after I finish this Baklava.

I'm not bashing America. As I said, I love this country, but it's tough love. All things considered, I'd much rather live in America than Greece. Here's five reasons why.

1. Power Strike - While in Athens, we experienced random power outages for about an hour or so. This was due to the union of engineers striking and not manning the power stations. It could happen in the middle of the night, the middle of the afternoon, you never knew. You could be in the middle of a shower and suddenly - NO hot water - POWER STRIKE. This is a little annoying, but of course we supported their cause. It's just - why did we have to suffer? We're not in power. Get it? Not in power? Anyway!

2. TV - There were about 10 TV stations with only one in English, but even the ones in Greek were just horrible programming. Boring documentaries, weird game shows, melodramatic soap operas - O.K. it DOES sound a lot like American TV, but at least we have more choices and way cooler shows and movies. Prison Break was on 7 nights a week there. Interesting choice of American shows to watch.

3. Smoking - I like living in a smoke-free society. Call me a fascist, but second hand smoke is just disgusting. Let's just say Greeks are not as enlightened yet. They're getting there slowly, but we're way ahead. Almost every hotel and restaurant had smoking in it.

4. Language - English is considered to be one of the most difficult languages in the world. I have to say though that Greek has got to be right up there with us. Spanish, French, German, and Latin are child's play compared to Greek. I take back everything I said about my high school and college foreign language classes.

5. Night Life - In America, there are many things to do with your evening. However, in Greece, our girls were consistently told not to go into town after dark and defintely don't let a man buy you a drink. It's equal to saying yes to going home with him. Wow, where's Beyonce when you need her? (Cue "Bugaboo") "So what? You bought a pair of shoes. Now I guess you think that I owe you."

So, hey, some countries have it over America in a lot of ways, but this is my home, and I'm so glad I live here. As long as we have the freedom to fight for freedom - this is one of the best places on Earth.

Next blog - An exploration of Hip Hop - stay tuned!