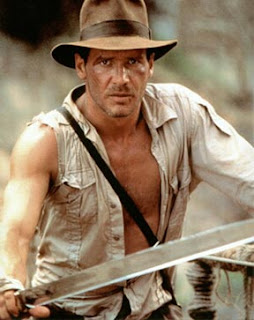 Since my run-in with Speed Racer, I've had the chance to catch a few more movies on my list. Namely, Indiana Jones & the Kingodm of the Crystal Skull and The Incredible Hulk.

In my humble opinion . . . People are torn about how to critique fantasy franchises.

Con Argument: This is so ridiculous and unbelievable!

Pro Argument: Duh! It's fantasy, get it?

So let's get that out of the way. No one expects an Indiana Jones movie to be believable. HOWEVER, there used to be something called storytelling and pacing, which the Indiana Jones and the Crystal Skull outing have neither. And sorry to say, I hated this film.

One of my fondest memories is the summer of 1981. I grew up in Memphis, but in the summers I would often visit my relatives here in the north. And that particular summer, I was staying with my Uncle Robbie here in Boston. I was 10 years old. He took me and my older brother to Dedham Community Theater on a hot July day to stand in line to see "Raiders of the Lost Ark." You know the rest of the story. Yes, I'm the generation of the hardest critics of this franchise, because my adolescence is wrapped up in falling in love with this movie, these characters, and this fantasy world. Yes, that goes for Superman (1978) and Star Wars too (1977). You wanna know about the sequels? Ask me and my friends.

And most people who are honest will admit the following truths about the Indy saga:

If I can expound on these simple truths:

1. "Raiders" is the best not because we fell in love with Indy and we were kids. It's the ONLY one of the four that presents situations that create intensity for the viewer - the boulder scene and the plane escape are our introduction to Indy and of course we're hit like a Mack truck by the grandeur of the display. But that's quickly followed by a multiple-country quest for clues to the lost Ark, and the stops and falls along the way are so well timed and full of real danger and fear, that we're unsure how the movie's going to end. And when you do get to the ending (which no one could imagine), you're left actually breathless. "Raiders" is the best because it's the only one of the four that achieve us feeling like we've been on this journey with Indy.

2. "Temple of Doom" was a complete departure from the "Raiders" framework, which would seem like a good idea. It was a necessary experiment - that failed. Short Round? Musical numbers? Eating mokey brains and bugs? Bugs? Bugs? More bugs? Pulling hearts still beating from a man's chest? Stones? Frakking stones? (BG reference, sorry) No, this was a test of patience for something cool to happen and all I got was grossed out. I still can't watch this one again.

3. "Last Crusade" would have suffered the fate of "Crystal Skull" if not for the following: A really cool "Young Indy" feature at the beginning of the movie - Steven Spielberg at his best. Sean Connery - everyone loves Sean Connery and the chemistry with Harrison Ford was undeniable. Admit it, the Holy Grail is the coolest sought after object in history. Props given. And the final scene with the Knight was really cool. These elements are why we enjoyed the movie, but the rest was forced action and silly bad guys trying to restore the ambience of "Raiders." Nice try, but no cigar. Still, it was enjoyable.

Which brings us to the final (we can only pray) installment. Everything that went wrong in the past has been done times ten here. I love Shia LeBoeuf, but let's get serious, what was he doing in this movie? Every stunt in this movie had no setup to make us care and then they were so over the top that you end up just laughing - nuclear explosions ("quick, get in the fridge!"), killer ants that consume your body in seconds, frakking TARZAN! ("hey I fell off the jeep, let me swing through the jungle with these monkeys!"). And then the still unexplained point behind the Crystal Skull. I mean, was there a prize or not? It seems the only prize was dying a horrible death, but whatever. I had already checked out. And also, wasn't that the EXACT same ending from the first X-Files movie? Ugh!

Have I exhausted this subject? Let's move on.

All I can say about the Hulk is that everyone is way too hard on Ang Lee's version. Yes, the father storyline ruined the movie. Yes, Nick Nolte was actually the star and the Hulk was a side character. Yes, we want more Hulk. However, the Hulk sequences were so good, come on. The dog fight? The escape from the military base? The jaunt through the desert? That was worth the price of admission for me, and I thought they were well done. However, as I've said in the past, great special effects doth not a great movie make. However, what did people expect? It's hard to make these comic book adaptations.

So the door was wide open for the new Hulk. Honestly, it was better, but not much. I could have done with more Hulk and less drama, just like the first go-round, except this time the drama was relevant. I also dig the Avengers angle they're sticking in there. Bottom line, there's potential for more here, where there was none after Ang Lee's attempt. Worth seeing on the big screen? - DEFINITELY. Best comic book adaptation? - DEFINITELY NOT.

And a quick recap of the other movies on my list:

Sex & the City - Haven't seen it yet, but glad it was well-received. Probably catch it on DVD. Funds are tight.
Kung-Fu Panda - My daughter is afraid of the evil character so we couldn't see it. I'm going to try to catch it in IMAX by myself. Gotta love IMAX!
Don't Mess with the Zohan - DVD rental at best. Why would I see this on the big screen? I like to laugh, but I'm a patient man.
The Happening - Unfortunately it seems my prediction came true. I'm sorry but like Speed Racer, I'll listen to a 100 critics if it means my $11 or a rental.
Get Smart - See "Don't Mess with the Zohan" review.

See you all at the movies! Iron Man rocked!