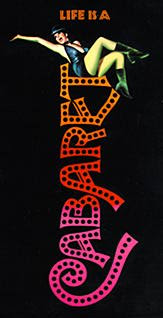 Ah, the talent show. The rite of passage for every cool person on earth. Yes, I say cool person because if you can get up on stage and potentially make a fool of yourself, you're cool.

Notice I didn't say you were "good." Plenty of people get on stage and are horrible. However, I believe that taking the risk is more important than the outcome itself. And when the outcome is that you are good - that's icing on the cake. No one said that the tortoise was a good runner. The point of the story is that he ran.

Anyway, too deep in here for me. This week, Funkyman finds friendship, fellowship, fun, and alliteration in Cabaret. This is basically a talent show for the 9th Grade class at the Dana Hall School. It's called Cabaret because traditionally the show was held in the Dining Center, and dinner theater equals cabaret. Also the show opens and closes with group song and dance numbers, two of which are from the musical CABARET.

Dana Hall has many traditions, but this one is my favorite, because its where personalities and identities are forged and better yet, appreciated by the entire school commuity. If a girl has a particular talent or interest, she has the entire school's attention for a few minutes while she gets to permanently imprint herself into our brains - even if that thing is acting silly with her friends. Sometimes, the talent is high, and sometimes the talent is not. But as I said earlier, it's the trying that counts.

Below I will recall some moments when I took risks and forever changed the perception of people around me. Episodes from my own soap opera - The Young and the Funky. Days of our Funk. All My Funky Children. General Hospital of Funk. Funk Tree Hill. Dawson's Funk. Gossip Girl. Desperate Funkwives. Thought I missed "Gossip GIrl" for a joke, huh? Nope. That show doesn't deserve funkiness. Ouch! Just kidding, never watched it. Anyway, I digress. On to the stories!

COUL-MAN (pronounced "coal man")
For high school, I attended an all-boys' Catholic school - 800 of us everyday trying to navigate the "Say No to Drugs" and homophobic 80's. I played flute in the school band, so you can imagine the names I was called in 1984. That being said, I was also one of the 4 African American students at the school - not very diverse. I was not known by my classmates by my true identity - Funkyman. Of course, at that stage, I was Funkyboy, but again I digress. Piano was my life, and no one really knew that. It wasn't their fault. When was I playing piano at school? Well, my band director decided to create a jazz band my sophomore year, and guess who already knew how to play piano?

We gave our premiere concert to the student body one day - "Introducing the CBHS JAZZ BAND" - and we did this Count Basie song called "L-O-V-E" which was largely featured a piano solo. I also got to wear shades for the song. Well, after the concert was over, I was late to class because the band had to break down all of the equipment. But, as I entered the classroom, the entire class erupted in applause and cheers. Suddenly, I went from being "Coleman" (we were only referred to by our last names) to David Coleman, the cool piano guy - or as some of my classmates liked to sing - "I'm a COLE-MAN! Did-duh duh duh did-duh duh" While I would smile at their nicknames (I had several), secretly they didn't know that it made me feel special to be recognized for something so personal to me. It was great not feeling invisible anymore. I would like to thank them for that.

THE TALENT SHOW
When I taught at Beaver Country Day School, I was the Choral Director and often knew about and saw talent in my students, Grades 6-12, that the community had no clue about - award-winning dancers (one Irish stepdancer who was amazing), comedians, and of course, musicians. Since we didn't have any outlet for the students except for large ensembles - band and chorus, I came up with the idea of organizing a talent show. I had to create the proposal, present it to the administration, and then to the entire faculty. They all supported it and left me in charge. I had to have auditions (to ensure what kids did was appropriate!) and then we did the show.

It was a great day, and many kids got the exact same peer response I did when I was in high school. I went to bed that night feeling great because I was able to give back an experience that meant so much to me.

THE COURTSHIP
I have never been considered a ladies' man, and my dating experience is not vast. However, whatever attention I've ever received from females has often been centered on my musical abilities. Girls love musicians. Girls really love musicians who can play songs they love. Girls really really love musicians who can write songs. But the best kind of musician girls love is one who can play, write and SING. It's as old as courtship itself. The man serenades the woman outside of her window - classic romance.

ATTENTION: NON SEQUITUR - I was just watching Say Anything again today - you know the John Cusack/Ione Skye movie with the famous boombox "In Your Eyes" serenade scene? That movie is 20 YEARS OLD. HOW DID THAT HAPPEN? Back to our regularly scheduled story.

Anyway, when I met my wife, Fadie, I didn't know what I was doing. I knew she liked me, but I thought that if I played and sang her a song I wrote, she would really fall for me. So it was just the two of us, and I sang her a song I wrote. And she did the most amazing thing - absolutely nothing. She said "Thank you, that's nice." It turns out that she didn't like me because of my musical ability. She liked me for me. Whoa.

Singing and playing for her was taking a risk, but taking that risk opened my eyes in a way the High School Jazz Band experience couldn't. I didn't have to do a song and dance to get recognized.

Now that's not feeling invisible anymore. I would like to thank her for that.