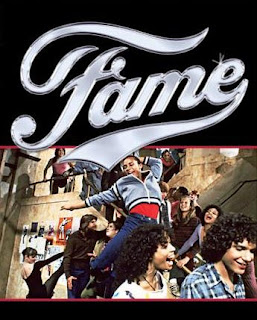 I don't care what you say, people remember FAME.

I'm not talking about widespread reputation or public eminence. I mean FAME - the TV show. (Duh!)

This show was on TV during my very impressionable youth, and of course, being a music student, I got swept up in the fantasy of being in NYC, studying performing arts at an exclusive competetive school, and being the envy of my peers for my individual and particular gifts. This show featured different characters:

Coco Hernandez - the headstrong singer/songwriter/dancer/actress who would stop at nothing to be discovered and of course, famous.

Doris Fensecker - the young, shy actress who learns to mature and conquer her insecurities.

Danny Amatulo - Doris' friend - what did Danny do anyway? He was kind of the everyman character I guess.

Leroy Johnson - the ultra-talented dancer from the hood who was a natural at ballet, though he had no formal training.

Bruno Martelli - the pianist/composer who was obsessed with synthesizers.

Yes, I wanted to be Bruno Martelli so bad, sometimes I couldn't watch the show. I envied his talent and his humility. His teachers (who can forget Mr. Shorofsky!) encouraged him to give up on the electronic music and focus on the classical. Coco, kept trying to get him to arrange pop songs for her and help him see that being famous is purpose of their existence. But Bruno was at Performing Arts High School to simply further his development and his craft.

I so related to that character because it was like my life story being played out. I, too, am classically trained yet obsessed with electronic music (thank you MTV). My teachers tried desperately to get me to give up playing pop, R&B, and rock because it was "destroying my technique." And to this day, people are trying to get me to go into the music business to be "famous." However, fame never interested me. Respect and friendship were always more inviting.

Anyway, I look back now at that show and marvel at how groundbreaking it was. It was multi-cultural - the main characters were Latino, Jewish, African-American, and Italian. The movie that the show was based on dealt with homosexuality, teenage pregnancy, pornography, and drug addiction. While those topics were too racy for TV in the early 80's, it was still a beacon of inspiration to see these diverse characters on screen pursuing their dreams.

There have been a few attempts to recreate the magic of Fame. Here are some that worked, and some that did not.

Krush Groove - The movie that tells the story of Def Jam records plays very close to FAME. Different characters dealing with the struggles of making it in the music business and the trappings that go along with it, yet all the while the movie has the upbeat feel of a musical. Classic.

American Idol - Teenagers and Twenty-somethings hungry to be discovered and fighting for stardom? Hmmm . . . now where have I seen that before?

BEST LINE FROM A MOVIE EVER! - "I can't say this officially, but . . . welcome to Julliard!" HAAAAAAAAAAAAAAAAAAAAAAAA!
This girl messes up her routine, her boyfriend comes barging into the audition, goes on stage - COACHES her through the routine, and then they tell her she's accepted to the most prestigious arts school in the world without seeing the rest of the applicants or discussing it with Admissions in NYC.

Step Up - OK, this movie is too painful to watch. I mean really. If you've seen it, you don't need a description. If you haven't, save your money.

Center Stage - Actually, I love this movie. It's poorly acted and silly, but the dancing is awesome, and the cinematography is beautiful. It's a great movie to watch and it is SO FAME, that FAME should sue. I'm not hating though. Fun flick.

Camp Rock - Basically FAME Summer Camp. This movie is awful. Was there one talented kid at that camp? I'll have to watch again. Hey, I LIKED High School Musical. Camp Rock was tough to get through, but not as bad as . . .

American Mall - Whoever made this movie should be arrested and convicted with no trial. A sad attempt to be High School Musical in a mall. The creators of FAME are distressed!

Rent - Tell me that Rent was not inspired by FAME, and I'll tell you you don't know anything about musicals. A culturally diverse bunch of young people living in a building, dealing with the harsh realities of humantiy - disease, addictions, prejudice - while all the while singing, dancing, and making the audience laugh, cry, and smile? Jonathan Larson, rest in peace, but even he would agree that this Pullitzer Prize winning play tips its hat not only to La Boheme, but to the magic found in the movie and TV show that made us laugh, cry, and smile - all the while singing along. Both are set in NYC. Coincidence? I think not. Enough for now. Study Hall's over.

I am so with you -- I'm gonna learn how to fly - HIGH! I've got it coming' together, people will see me and cry! FAME!

I'm so very partial . . . my high school class was the class used in the original movie Fame. Fiorello H. LaGuardia High School of Music and the Arts, Class of 1979. In fact, if you check out the graduation scene, Funkyman, and you don't blink or sneeze while viewing, you might actually see a 17 year old me. Remembah, remembah, remembah!