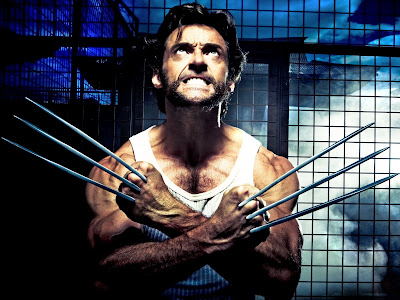 Greetings Funkadians! It's that time of year AGAIN? I can't believe a year has gone by. I've been feeding my need for fantasy with Heroes (which ended last night), Lost (which is SO GOOD this season), Terminator: Sarah Connor Chronicles (which ended 3 weeks ago) and Battlestar Galactica (which ended as a series two months ago). So of course, it's time to feed on the fantastic feast of film Hollywood features for us. Last blog, rhyming, this one alliteration baby!

X-Men Origins: Wolverine (May 1) - You're nuts if you don't want to see this. The most popular comic book character in the world is Wolverine. I know, my fellow Superman fiends, yes it's true. While Superman is the most recognizable superhero and has had more success overall - when you consider Wolverine's only been around a few decades, he wins hands down. Besides, indestructable claws coming out of your hands will NEVER GET OLD.
Hugh Jackman so looks this part, and after some serious training, definitely has the arms to show for it. I can only pray the movie and the story matches its own hype. We'll see!

Star Trek (May 8) - You're double nuts if you don't want to see this. I HATE MOVIE PREVIEWS BECAUSE THEY MAKE THE MOVIE LOOK SO GOOD! I often don't watch the previews so I won't be let down, but MAN, this looks good. I'm already hooked and waiting for either a huge let-down or the Iron-Man of 2009. Which will it be?

Angels and Demons (May 15) - You're nuts if you WANT to see this in the theater. The prequel to the DaVinci Code (don't even get me started on that book! Didn't hate it, but can we say overrated? Oops, that rhymed.) Can anyone say DVD rental on Netflix with 10 friends pitching in for the fee?

Terminator Salvation (May 21) - May is a crazy month for blockbusters. Three huge franchises - X-Men, Star Trek, and Terminator - what more could we ask for? What . . .you say Batman/Christian Bale is John Connor? Well, enough said - where do I buy a ticket?

Night at the Museum 2: Battle of the Smithsonian (May 22) - Mmmmmm. I'll wait for the RottenTomatoes.com answer before diving in. No offense. Mildly enjoyed the first one.

Up (May 29) - Has Pixar ever let us down? Nope. I doubt this year will be the first time. A movie about an old man who turns his house into a giant hot-air balloon. I'm anxiously awaiting to see what the geniuses of storytelling and animation did this time.

Land of the Lost (June 5) - Let's see - Will Ferrell back in time with dinosaurs? I'll be there.

Year One (June 19) - Let's see - Jack Black, Michael Cera, and Christopher Mintz-Plasse (McLovin!) starring as cavemen? Will they run into Will Ferrell? Now that would be funny. However, I doubt that's going to happen. RottenTomatoes.com says . . . ?

Ice Age 3: Dawn of the Dinosaurs (July 1) - Do you notice a prehistoric theme here? Since the summer is usually pretty fun for family movies, I'm sure this will be no different.

Public Enemies (July 1) - Who will win the epic 4th of July weekend movie battle - the Ice Age kids' flick or the Michael Mann helmed Johnny Depp/Christian Bale (Yes that Batman/John Connor guy again!) take on John Dillinger. Machine guns and bank robberies are as American as apple pie. I think Public Enemies may have a chance.

Brüno (July 10) - Can Sasch Baron Cohen do it again? Borat took the world by surprise. I'm sure Brüno did too. I can't wait.

Harry Potter & the Half Blood Prince (July 15) - Cue cash register sound - "Ch-ching" Does it even matter if it's good? Money in the bank.

G.I. Joe: Rise of Cobra (August 7) - Let me just say that August sci-fi releases in general are bad. They put themselves in a position where there is little competition but still excitement over good movies earlier in the season. I'm sorry, but Dennis Quaid as Hawk? Wake me when it's over. I'm actually secretly rooting for this movie, but if it walks like a duck . . .

Of course, Destro, Cobra Commander, and even Serpentor are no match for the power of

- Funkyman - See you at the movies!
Posted by DavidColeman at 7:19 PM