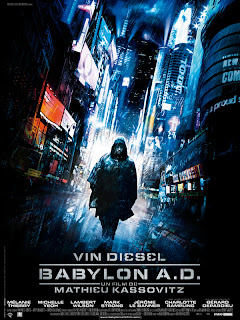 So, the lazy days of summer are moving along at a quick pace, and as I promised you before - here's some movie coverage.

Now, I have been watching a lot of movies over the last few weeks, but not so much in the theater. In theater, I've seen Star Trek, Terminator Salvation, Up, and Transformers Revenge of the Fallen. 3 of these 4 are sequels or reboots.

What is it about sequels? It's so rare that a sequel be so-so. It either is WAY better than the original or SO bad you want your life back. I for one have been catching up with a lot of movies on video - Forgetting Sarah Marshall (LOL), Iris & Abby (LOL), You Don't Mess With the Zohan (LOL), Underworld Rise of the Lycans (Zzzzzz), Wonder Woman (full length animated feature - very well done), Kung Fu Panda (great animation, so-so story), The Wrestler (Wow, amazing), Frost/Nixon (impressive), Bolt (very cute), Gone Baby Gone (WHOA - SO GOOD!), and Babylon A.D. ( . . . . .

Babylon A.D. is officially in my list of worst sci-fi movies I've ever seen. How do you achieve such an honor? Here is the top 5 list of hours I WISH I could get my life back but can't.

Babylon A.D.
To achieve this honor, you have to defy simple logic, do things that are hilarious when you're trying to be cool, or be just plain stupid. Without going into too much detail, this movie is a blatant ripoff of Children of Men and Minority Report and as a sci-fi movie, it's lacking in much science. The result is a poor action movie that doesn't even have a gratifying payoff in any of the scenes and especailly the ending. You ever feel like you've been cheated and want your money back? No? See this movie.

The Fifth Element
Bruce Willis, I know, I know, I love him too but MAN! I usually don't have a problem with clichés but you know what this movie is about? A cab driver finds himself in an intergalactic plot to bring together the five elements. Except the fifth element is a girl - a weird girl that he can't quite figure out. All he knows is that he must bring her to the sacred temple of the elements - Fire, Water, Air, Earth and as we learn in the film, the girl turns out to be . . . LOVE.

No, not love "Bruce Willis falls in love with the girl." No, she's actually LOVE in human form.

I need a minute to scream again.

Oh, and Jesus called - he wants his job back.

Event Horizon
Clue - whenever a movie has big-name actors starring in a sci-fi/horror movie - RUN! They signed on for the picture because on paper it looked cool - but as we all know, a cool idea does not always become a cool reality. This is never more true than with Event Horizon - a movie about a spaceship that disappears and then reappears after several years, and the investigators learn that the ship . . . IS ALIVE . . . AND IT'S EVIL. Insert ridiculous plot and dialogue here.

Battlefield Earth
L. Ron Hubbard's metaphoric novel about capitalism run amuck set in the distant future is considered a sci-fi classic. John Travolta's producing and starring as the ultimate alien antagonist is considered a sci-fi blunder rarely matched. It's impossible to believe that these aliens were supposed to stand 9-feet tall and when they open their mouths they sound like Swiper the Fox. Honestly, in the first few minutes of the movie, I thought I was watching a parody. As I learned this was the actual movie, I wanted to leave the theater - but I was intrigued to see how bad it really was.
I stayed.

This would be the worst sci-fi movie I've ever seen were it not for . . .

Highlander 2
Where do I begin? Well, let's start with Highlander 1 - one of the most original and cool fantasy movies ever made. The premise that there are immortals living among us - fighting throughout the centuries, decapitating each other until only one was left, all for the promise of a prize so amazing that no one could describe its power - is like the ultimate olympics. And the fact that the guy who makes it to the end is an underdog (Connor MacLeod) who had been trained by a man over 2,000 years old (Ramirez) made him a perfect character to root for. The catch phrase was "There can be only one." At the end of the movie, he wins, he's the last one, he gets the prize - Yay!

So the natural question is - Highlander 2? If "there can be only one," how can there even be a sequel? The title itself contradicts the premise of the first film! It turns out, hey he's not the last one after all - they are aliens, and it turns out there's a planet full of immortals just waiting to come to Earth.

Let's not forget that Highlander's teacher, played by Sean Connery, who dies in the first movie defending the Highlander's wife, is also back for more! HIS HEAD GOT CUT OFF! BUT NOW HE'S BACK! It seems all that Highlander had to do was just call his name - RAMIREZ!! - and POOF, he reappears.

NO YOU DON'T!!!! HE'S DEAD!!!! Is that the secret? Can we just scream out the names of any of the fallen immortals and they all come back?

And last, in the first movie - yes they were immortal, but they felt real pain. After the Highlander's first encounter with a sword wound, he was comatose for days. 500 years later he stabs himself to prove he can't die, it hurts like the Dickens. They run and they get tired, etc. etc.

Not in the sequel.

There's actually a scene when Ramirez and MacLeod get sprayed with bullets. They just dust off their clothes and keep running, counting the number of holes in their clothes.

Alright, I've said it before, and I'll say it again - for sci-fi/fantasy films to be effective - THERE HAS TO BE AN ELEMENT OF PHYSICAL VULNERABILITY. Every great sci-fi film has proved this:

The Matrix - awesome - when Smith showed up, you ran like your life depended on it, because IT DID. In the sequel, Neo is Superman and can fight hundreds of Smiths with one hand - Where's the fear? NOT COOL.

The Empire Strikes Back - awesome - Luke's HAND GETS CUT OFF! Oh poor Luke, want some anesthetic for that cut? How 'bout Darth Vader is YO DADDY? NOOOOO!!!

Raiders of the Lost Ark - awesome - several ridiculous near misses, but Indy bleeds in a fight and is genuinely afraid of SNAKES! This makes him REAL!

Iron Man - awesome - Tony Stark is brilliant but has a HOLE IN HIS CHEST - if the battery dies, so does he.

Serenity - awesome - I mean did you see that last fist fight? Everybody is black and blue - the doctor is shot, the pilot gets killed, Reynolds can barely walk back to the ship - they win but they had to take some serious losses in order to do so.

OK, I just named five of the best sci-fi/fantasy movies I've ever seen. I've definitely covered this topic before, but hey, it's summer. And as much fun as I've had catching up on movies, summer will soon be over for