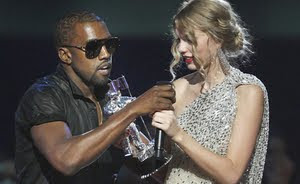 Hello Funkynation! I am back and rather than kick off my return with a bunch of jokes and funny stories, I'm going to say something that really has been bothering me.

When Kanye West interrupted Taylor Swift's acceptance speech, I said, "Wow, he has redefined the word 'asshole.'" By inferring that Beyoncé was done an injustice by losing the award, he insinuated that there was something wrong with the awarding process - and since he already has a history of being outspoken on racial issues - one could only assume he was referring to the fact that the black girl didn't win even though she supposedly had the superior product.

Truth be told, if Toby Keith had gotten up on that stage in the name of Taylor Swift to interrupt Beyoncé's acceptance speech, not only would everyone in America have called him an "a"-hole, but surely a racist AND there would have been a RIOT followed by a march on Washington and a boycott of MTV, led by Al Sharpton. You know I'm right, and I have nothing against any of these people - but even I can admit that would have been my reaction. Kanye West is hiding behind the history of oppression in this country as an excuse for the finger-pointing double-standard and getting away with murder. He knows full well we have sufferred as a people - that's no right to do what he did.

What's wrong with this picture is obvious, but then something else struck me. Everytime (most everytime - Cynthia McKinney) someone gets caught in public doing something disgraceful concerning racial prejudice - whether black or white - it's a man. You have read on my blog over the years about how race is a huge issue in this country and that people need to be sensitive to the existence of its ills and misfortunes caused by them. However, let's look at the history of my entries on this subject: MLK's Birthday, Michael Richards' use of the "n" word, Jeremiah Wright & Obama, OJ Simpson, Three 6 Mafia winning an Oscar, Don Imus and his comments, and now Kanye West.

And let's not forget our beer buddies Obama, Crowley, and Gates - who this summer put on quite the show. I'll give the synopsis:

Crowley: Sir, can I see your ID?
Gates: How dare you ask for my ID! Even though I have experienced actual racial prejudice in the past, I'll show you how smart and famous I am by screaming, talking about your mother, and threatening to make a documentary about police abuse.. What are you going to do about it?
Crowley: How dare you question my asking for your ID! I'll show you what I can do about it. You're under arrest, even though the charges will be dropped because you and I are both being pretty silly.
Obama: Hey stupid, leave him alone. Oh, my bad. Let's have a couple of cold ones and allow photographers to see us drinking in our suits because we want the children of America to know . . .

Now, was this about race? Or was it about MEN? Men who get insulted and indignant and use whatever power they have to put some other man in the position of subordination. Gates KNEW he had right on his side and was going to teach Crowley a lesson. Crowley KNEW he had the law on his side, and was going to show Gates how to respect the police. Obama KNEW he was the president and could get away calling the police stupid. But all they ended up KNOWING was that this was a mess.

Was anyone thinking with their brain in these instances? I would argue no. Would women have gotten caught up in a similar situation and allow it to escalate? I would again argue no.

WHAT IS WRONG WITH US MEN? Have I been subject to the same curse of the Testosterone? I'm starting to look back over my life and wonder about the things that upset me, things I stood up and fought for, and things I accused of others.

I think its time to reexamine, reevaluate, and redefine not what manhood IS, but what it should be. I want to be a good man, not just a man.

Poor Taylor Swift - another victim of the abuse of testosterone and alcohol - the two don't mix Kanye, despite what the president said.