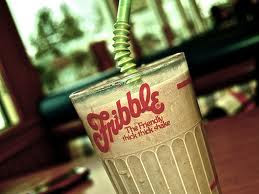 Long-time family restaurant chain, Friendly's, announces that it's filing for bankruptcy. You know Friendly's . . . home of:

- The subtly inappropriately-titled "Happy Ending" Sundae
- The diabetes/hyperactivity inducing Reese's Peanut Butter Sundae (so good!)
- Bacon Cheeseburgers with butter-topped grilled bread with tons of fries (love it!)
- (and my all-time favorite) THE FRIBBLE!

I used to go to Friendly's JUST to get a chocolate Fribble - probably the best shake I ever had. Unfortunately my memory of the Fribble is tainted by my very last visit to a Friendly's restaurant. As a matter of fact, over the years, I had so much HORRIBLE service at various locations of this chain, that the name "Friendly's" became the ultimate irony. Here are the tales of my worst restaurant experiences, which happen to all take place at Friendly's.


FRIBBLE, PLEASE?
As I stated earlier, I was a big fan of chocolate milkshakes - and who isn't? They're huge and they taste awesome. What's wrong with that? Well I'll tell you.

My last visit to a Friendly's was years ago, when I was in between gigs and stopped in for some lunch. Friendly's can be busy during the lunch hour - understandable. I placed my order - Grilled Chicken Sandwich, Diet Coke, and . . . you guessed it. Not complicated, right?

Waiter comes back with some water.

Waiter comes back again with my soda.

"Thanks! Could I also have the Fribble now?" It was my wish to have the shake first. He said no problem.

Waiter comes for the 3rd time with the Chicken Sandwich.

"Thanks! Still waiting for that Fribble, when you get a chance." He said no problem.

Waiter comes back to refill my soda.

Now at this point, any normal person would get upset or begin to wonder if something was wrong. I'm assuming that he forgot the Fribble, and by the time my meal ended, it was just too late. Next thing I know, he slaps the bill on the table and . . .

I had been so patient, and honestly I was finally upset. I asked the waiter about the charge, and he said "Oh, right, sorry." That was the first, last, and only time I failed to leave a tip for a waiter. Doesn't matter anyway - I paid for the Fribble. Never been back since.


I LIKE MY CHICKEN RARE
Now you're saying, "Funkyman, that was an honest mistake. He was overwhelmed and they have a difficult job." True, but remember, that was my last horrible experience - certainly not the only reason I stopped going.

Some people like their steaks well done. Some like them medium (me), and some even take it rare (ew!). But how about chicken? I think it's safe to say most people like (actually need) their chicken to be cooked all the way through. This is not difficult and doesn't take much time. Right?

I ordered a Grilled Chicken Sandwich from Friendly's once, and the sandwich hit the table looking DELICIOUS! However, as I cut the sandwich in half (That's how I like it - thank goodness), I quickly learned that the seared, grilled chicken breast was only so on the surface. The inside, was 100% uncooked. Raw. Translucent pink.

OK, you say. It happens. Right? So we send the sandwich back, and you would think they would either throw that chicken back on the grill and let it finish cooking OR provide us with a new one. But no, that's too easy.


THE LAST SHALL BE FIRST
Of course, I saved the best for last. My wife and I used to frequent restaurants 4 to 5 times a week. We ate out a lot, and we had seen a lot of things, great and not-so-great. There is nothing that we championed more than good waiters/waitresses. When they help you feel important, they make the experience so much greater. I'm a huge tipper (sorry Fribble man!). Of course, this is Friendly's, and we never expect awesome service - we just want to get in and get out alive.

One night, we walked into a Friendly's and saw only two people sitting at a table eating. In fact, there was only one waitress and one cook. You would think we would be seated immediately. However, the waitress continued to serve the seated couple, and we stood patiently waiting to be seated. Another couple came in behind us. The four of us waited paitently. A third couple came in, and then there were six.

Now, my sensitivity meter was starting to rise, and my wife and I looked at each other as if to say, "Did that just happen?" The waitress seemed to be running around taking care of the orders of the other 3 seated couples, and finally, my wife called her over.

"Is it the policy of this restaurant to serve the last customers first and the first customers last?"

The waitress looked at my wife . . . TOSSED AWAY THE MENU SHE WAS HOLDING LIKE A FRISBEE! ACROSS THE DINING ROOM . . . put her hands on her hips and said, "FINE! What do you want?"


We're going to pause here for a brief service announcement.

PSA: If you cherish your life, do NOT get an attitude with a black woman who is ALREADY upset. We now return you to your regularly scheduled Adventure of Funkyman.


Yes, I've never seen anything like it before. I really need you to imagine someone throwing an entire menu across a room where people are eating and copping an attitude like "how dare you not see how much I don't want to be here today." This is where my wife made her famous statement:

"You do not exist anymore. I need the manager."

The waitress calmed down a little and tried to say something extra.

"I am not talking to you. You do not exist."

My wife was MAD. The waitress left. The cook/manager came over and apologized for the bad service, took our order, and then the waitress came back again and gave an apology that was clearly forced, and my wife never even looked her way. Heck I was scared too. In fact, she then turned to me . . .

Funkyman: "Me? Hey I'm on your team! Besides you were handling it fine. It didn't seem like you needed help."

Funkywife: "That's not the point. You could have said something too."

Funkyman: "Wait, it sounds like you're blaming me for believing in you to handle the situation."


And with that, I'll end this adventure, since as my wife made very clear all those years ago, I am a figment of your imagination. OK, the story is true though maybe she didn't say I don't exist. Just kidding. Love you, Fadie! :-)

I still want my Fribble, though.