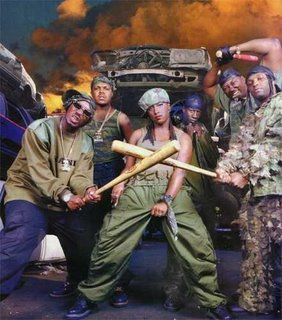 What is this? Is that girl grabbing herself? Why are they so angry? WHO ARE THESE PEOPLE? No it's not our forces at Guantanamo Bay. If you don't know already these people are the new owners of an Academy Award.

Yes, yes. Three Six Mafia wins an Academy Award. That is probably one of the most original sentences ever written. Who in a million years would think these two cultures - Dirty South Gangsta Rap and the Essence of Finance-Driven Movie Making - would collide? No one was more surprised than 36M (we're close now, so I can call them that).

I know what you're saying - Eminem won for "Lose Yourself." True, but Eminem didn't perform at the ceremony. He wasn't even at the ceremony. Also, "Lose Yourself" is considered by many to be not just one of the best rap songs ever written, but one of the best songs ever written. It was no surprise to anyone that he won that award, especially looking at the competition. It wasn't even close. Also, there was an everyman quality to that song. You can relate to the lyrics about taking advantage of that opportunity that may never come again and giving it your all. Pretty cool.

But how many people know how hard it is out here for a pimp? I mean, I know, but that's me. I've been pimpin' for years. But I digress.

Seriously, don't get me wrong. I loved Hustle and Flow. Like 36M, I was raised in Memphis, TN. The movie's depiction of impoverished life in Memphis was quite accurate, and of course it was, it was written and directed by a Memphian. I own the soundtrack. I really like "Whoop that Trick" (more than the pimp song). However, I would never imagine a tuxedo or gown clad person at the Oscars saying, " . . . and the Oscar goes to . . . WHOOP THAT TRICK!"

If you saw the awards, you know what I'm talking about. Picture an auditorium filled with black-tie affair men and women, and on stage is the most graphic display of what it is to be poor, black, and talented in America - Guys and girls in street gear dancing and bouncing about what it's like to hustle women for a living. As a rap fan and a Memphian, I didn't know whether to be proud or ashamed. I felt a little of both. I love rap music, but I do not support all of its images. These guys advocate marijuana use. But hey different strokes, right? Isn't there a saying like, "America is a melting pot?" Well now we have a new one: