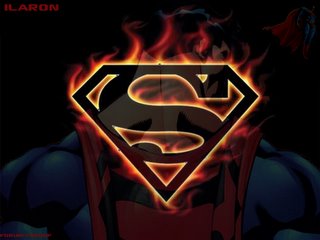 If you're younger than 22, you may not have experienced what I'm about to describe. However, you will understand. But when you finish college and you're not living the "American Dream" life everyone taught you about, you feel lost. Many of my generation finished school without a job or a clue to what we were going to do the rest of our lives - even though we majored in specific subjects in college. Most every person I know that graduated is doing something different today than what they majored in college. And though I majored in music and was a musician, I didn't have a clue how to make a good living out of that without going crazy working 10 jobs, which is what I was doing. I was working to try to pay rent and feed myself.

Anyway, I spent a lot of time at the movies and reading comic books to pass the time. I thought a lot about how cool it would be to have super powers. I thought, "If I had Superman's powers, I probably would use them to hook myself up!" This is not entirely selfish because paying rent and feeding yourself can be very tiresome and very old. Wouldn't be great to be able to have super powers and make millions of dollars overnight? I thought so. Not to mention the flying and the super strength and, well use your imagination . . .

But then it hit me - we already do that. We already have powers and we use them to hook ourselves up - pay rent and eat. There's nothing wrong with that inherently, but it doesn't take much to realize that many of the world's problems are because we're so busy working to feed our own families, we don't have the mental or emotional space to care about other people to the degree that it solves problems. We are taught from day one to go to school, get good grades, get into a good college, and get a good job before starting a family - WHY? - to make sure we can take care of ourselves. So we spend the first 22 years of our lives only concerned with ourselves.

Superman didn't hook himself up though. Not only did he live a meager life, but all of the amazing things he did and could do, he did them anomynously. Superman is not his name. He never once used his powers to get something for himself. He only used his powers when . . . someone else was in trouble. Superman realized his gift was not powers; it was how he used his powers. This is not too deep obviously, but it was a revelation for me. Thinking about Superman made me want to help someone else in need, not for myself, but because that's why I was given the powers.

So, I started wearing a Superman shirt on days that I would devote myself to helping someone out - whether it was doing someone a favor, or playing something for free, or volunteering for a charity, whatever. The occasional thought soon became an everyday commitment. And that's where the "obsession" came in.

I made a commitment to wear the Superman logo, whether on a shirt, a keychain, a pen, whatever, EVERYDAY to remind myself to do something for someone else that day. Of course, people started to laugh at me and wonder what my deal was.
Nevertheless, I had nothing but other people on my mind. I did this for years, until finally I got a full time job at a school in Wellesley where I couldn't wear these shirts everyday, though I did for a long time underneath my clothes. Admittedly that was a little weird.

I then wrote an album dedicated to the theme of being a hero, and I got all of my Superman stuff out of me. I wrote songs called "Don't Mess With Superman" "I'm Not Superman" and of course "Funkyman."

I bought a Superman statue of the logo and I keep it on my desk as my daily reminder that it's not all about me.

Ever imagine what it would be like to have all of that power and not use it for yourself? You might say "Superman is a fictional character. It's not real." But think about it. There was someone who walked the earth who had Superman's powers and a lot more. He didn't use his powers for himself, he didn't take credit, and he did it only when people were in need. He's another one of my heros.
Posted by DavidColeman at 10:43 AM