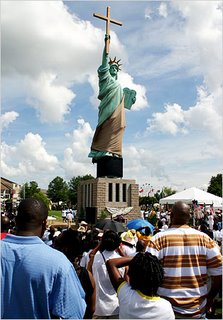 Q: So Funkyman, why haven't you posted in three weeks?

A: Because I blog like I write songs - when I'm inspired.

Some composers write music everyday just to keep themselves in practice. I have tried to do that unsuccessfully. I find rather that my songs are best when the spirit hits me. I think my blogs suffer the same creative fate.

However, I am in Memphis, Tennessee right now, which is where I grew up. I'm staying in a hotel, and I was just driving around the corner to give my daughter a nap, and lo and behold this statue lay before me. Inspiration has struck.

I had read about this in the news but nothing could prepare me for the real thing. Wow.

I am not offended by this statue, but it is inarguably weird. Obviously the pastor of the church who built this thing had a two-fold purpose - to make a statement about America and to spark conversation, whether one likes the statue or not.

I for one am all in favor of conversation. I listen to talk radio everyday, both liberal and conservative, and, after reading, I think it is our most imporatant intellectual activity. Anything that can cause conversation, debate, or even an argument is a worthwhile thing to think about.

Is this statue for inspiration or controversy? You be the judge. It is a free country and we have freedom of expression and freedom of religion.

We are also free to be stupid.

I think the statue is for new aluminum siding.

Could be. I heard the Ghostbusters are going to use it to kill an evil ghost in Ghostbusters 3: Holy Trinity.