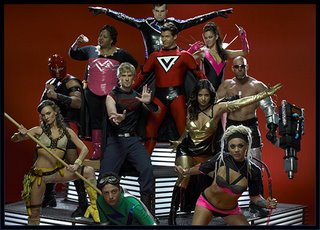 The JLA, or "Justice League of America" for those of you who don't read comics, is the greatest superhero team ever created. Yes, even greater than the X-men, though I prefer the X-men. But I digress.

The JLA consists of Superman (the greatest of all time), Batman (the coolest of all time), Wonder Woman (soon to be a major motion picture - PLEASE don't screw it up), Martian Manhunter (an old staple character that most have never heard of - rivals the powers of Superman, though with psychic abilities Superman doesn't have), and of course Aquaman - insert your own joke here (did you see the failed pilot for the Aquaman TV series? You gotta get an iPod).

They've been around for a long time, and pretty much every superhero team that has followed, has been patterned after or as an answer to the JLA. Enter the above photo.

These are the contestants from the new reality show "Who Wants to Be a Superhero?" which just concluded tonight on the SciFi channel. 11 contestants live in a house and 2 are eliminated each episode after a series of challenges. They of course are in full costume and act like their character most of the time. Sound ridiculous?

It is. But it's also very entertaining. Of course these people have severe needs for attention, but we all kind of do. (See my first blog entry in January '06)

Stan Lee, creator of Spiderman, Fantastic Four, Hulk, and X-men among others, is the Donald Trump of this "Apprentice" spinoff. In the end, the winner gets his/her own comic book, created by Stan Lee and a full-length movie on the SciFi channel featuring their character.

Of course we are all laughing our heads off watching these people unabashedly playing out this show and these scenarios. It's kind of surreal to know that there are thousands more out there who auditioned for Season 1 and even more will for Season 2. Where's the shame? the dignity? Don't they know we're laughing?

BUT, while we're busy laughing at these people, stop to think - "If this is their personal dream, and it comes true, is that really funny - or cool?" What's your dream?

As for me, you know, I just like being myself.

- The Adventures of Funkyman (oops. wow. Season 2 auditions, here I come!)
Posted by DavidColeman at 11:32 PM