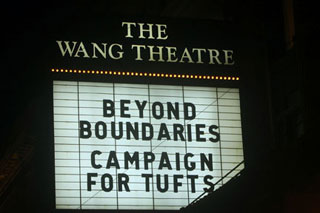 Bright lights, little city! Seriously, you can walk this whole city in 3 hours. And what's with all the one-way streets? It's like they just paved over the horse trails after the Revolution was over. But I digress.

Pictured above is the marquee for the Wang Center in Boston, MA - the premiere performing arts venue for the Greater Boston Area. Tufts University recently staged a kickoff event for a huge capital campaign in an attempt to raise over a billion dollars. In order to do this in style, several student performing groups were asked to perform, including the Third Day Gospel Choir, which I direct.

The Tufts Third Day Gospel Choir is a unique bunch of individuals. They number about 115 from ages 18 to 42, though most of them are undergraduate students. 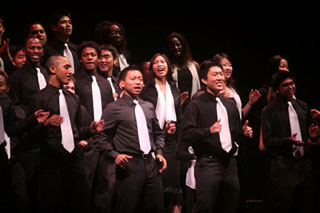 I have a lot of experience with college gospel choirs. I have worked with every almost every college gospel choir director in the Greater Boston Area - Harvard, Northeastern, MIT, Brandeis, BU, BC, Berklee, NEC, and I myself directed Boston University's Gospel Choir for 10 years, and I thought I'd seen it all. But never had I faced an opportunity like this - to present gospel music in a concert hall with serious pedigree.

We stood on the stage where everyone from Yo-Yo Ma to Stevie Wonder has performed. We rehearsed and warmed up in the room where the Alvin Ailey Dance Company works out before a show. It was an honor to be performing in the same space. But it's deeper than that. This fulfilled part of a 18 year-old fantasy - the Concert Hall Fantasy.

When I was 17 (just Funkyboy at that time), I wrote and recorded my first concept album. Almost every song was centered around my relationship (or lack of) with a girl I asked out on a date and how she turned me down. Stop laughing. I was 17.
Anyway, the third song of that tape (pre-CD) was called "Concert Hall Fantasy." It was based on the idea of how cool it would be to stand on stage in a huge concert hall normally used for classical music and be rocking out to my own music - rock, jazz, fusion, gospel, whatever. Except in my dream, the concert hall was empty.

Later, I wrote a couple more "Concert Hall Fantasies" before I got seriously into composition and had to abandon fantasies and replace them with school assignments and deadlines. However, the dream remained. On Friday, November 3 at the Wang Center, I was able to fulfill that dream a little. The choir sang one of my own compositions, but 800 people in the audience is far from empty. Regardless, all things considered, it was too cool.

So you say, "Why do you fantasize about playing to no one?" Well, I believe that real magic happens when no one is around. Think about it, you've had your greatest ideas when you're alone. When you love someone, you express it best when the two of you are alone. When no one's around and you crank up that music . . . well, you know how crazy you are! When you pray, you alone talk to God and hear from Him. Etc., etc.

Well, with Tufts Third Day Gospel Choir, magic happens when we rehearse. It's just me and the choir in a room week to week, but what we share in rehearsals is a magic that can't happen with an audience. Of course, we are working toward presenting that magic to an audience, but it will be different. And different is good, just not the same.

(Ooooohh, that's SO deep. I should have been a philosophizeranthropist, but I was no good in Sience, and I had trubble with speling.)

Tufts Third Day Gospel Choir is made up of a very diverse group of people, from different cultures and faiths, and we come together to unite our struggle and present our worship together through those struggles. 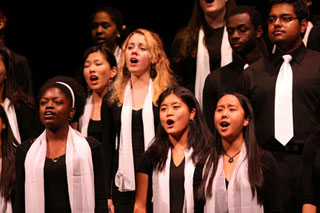 Come to our concert on Saturday, December 2 at 8:00 p.m. in the Cohen Auditorium of the Aidekman Arts Center at Tufts University in Medford, MA.

We will raise the roof.

David, I can't NOT respond. When you shared this event with us in our prayer circle at Confirmation I knew it was a big deal. Thank you for capturing it online for your "community". God is a great God and He's got even greater things ahead for you. I'm tagging along as long as you'll let me. See you Saturday. I can't wait to see you back in your element with the big choir! Peace, Shaunielle