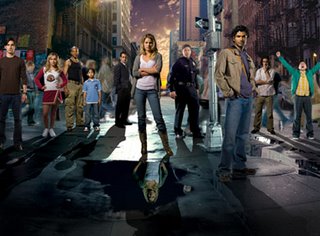 By now you know I have an interest in comic book superheroes. After you read enough comic books, the initial fascination of the cool powers the heroes have mature into an appreciation of the character development and the philosophical explorations that the writers pour into this artform. The art is amazing as well, but every artist will tell you that without a good story and a good writer, they can't make a great comic book.

The same is even more true for movies. Once the 2-dimensional, endless world of a million colors and possibilities has been left and we enter the 3-dimensional world of real life, it's very difficult to sell a comic book superhero and make us enjoy it.

Recent failures include:
- Fantastic Four (AHHHRRRGGHHH! So mediocre. Worthy of a blog entry.)
- Elektra (Zzzzzzz. I mean, do we really care about this character?)
- Daredevil (Ben Affleck indeed! Did they read the comic book? Don't get me started on the Kingpin.)
- The Hulk (I liked it, but it failed. Eric Bana is a great actor, and this was beneath him. Ang Lee is a great director, but we want the Hulk, not cinema.)

Recent successes include:
- X-Men 1 & 2 (Haters can hate, but this was the real deal.)
- Spiderman 1 & 2 (You may not like Tobey, but don't hate the movie. Too cool.)
- Batman Begins (Finally! We've captured the Dark Knight. Can't wait for the sequel.)
- The 40-Year Old Virgin (Just kidding, but this movie is amazing. On the other hand, being a 40-year old virgin does make you a superhero!)

And television? Way more misses than hits. There are too many to list - literally hundreds. Superheroes cannot survive on the small screen. Whether it's budget limitations, bad acting, bad writing, or all of the above, no superhero has lasted on TV with any kind of success, and by success, I mean respect from fanboys like me.

Recent failures include:
- Aquaman (Haven't seen it? That's because the pilot never made it to TV. You can download it and watch it on your iPod though.)
- Birds of Prey (Huntress, the daughter of Batman and Catwoman, and Oracle, formerly Batgirl tried hard to make me care, but the writing was so bad, it lasted only one season.)
- The Adventures of Lois and Clark (Just silly. Dean Cain never made anyone believe he was Superman, and the villains were ridiculous. It was like Adam West's Batman for the 90's)

Recent successes include:
- Smallville (Another Superman show. The target audience is teenagers into the O.C., but this show has done well, though I don't watch it myself.)
- The Flash (Actually won an Emmy nod for writing.)
- Dark Angel (Jessica Alba lasted only 2 seasons with this show, but fans were loyal and liked the idea of a heroine searching for answers to her abilities.)

NBC finally has stumbled upon what looks like the coolest superhero TV show ever. I heard about "Heroes" (pictured above) from a colleague at work, and I'm thankful, because this show is everything that I love about comic books - Diverse characters, mystery, a story with somewhere to go, and cool powers.

Basically, you have seven people beginning to discover simultaneously that they have superpowers (Teleportation, Flying, Telekinesis, Indestructability, Prophecy, Strength, and a channeler who can do them all when nearby). There is also a super-villain on the loose that has all of the heroes' powers combined. So how can they defeat him? You got it - they have to come together. The show is the story of how they learn about their powers, how they are connected to one another, and they will have to work together to defeat the great enemy. It's the ultimate metaphor for everyone on earth.

It's great acting, great writing, and cool special effects. A recipe for a great superhero show.

I'm in heaven. Let's hope it can go the distance and set the standard.