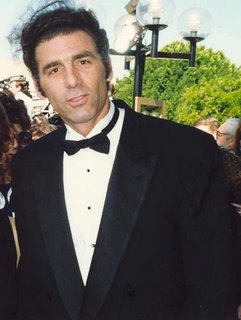 Oh boy. What do you say? It's done. He said it. Can't erase the tape. Everyone knows now. It's too late to take it back.

You probably think I'm talking about Michael Richards saying the word "nigger," but I'm not. (It's O.K. I can blog that word because I'm black.)

Nope. I'm talking about the words "I'm not a racist." So here is my open letter to Michael Richards.

Who cares? You don't have to be a racist to say things and do things that are damaging and effective. It makes absolutely no difference if you consider yourself a racist or not. The fact is, most racists who would be proud to call themselves such are too busy hiding in basements and barns holding "racist" meetings but never taking any real action. You will not find a real "racist" in a nightclub screaming the N-word over and over. He/she would never make it onto that stage.

But they will let you on that stage. And with today's technology (A cell phone! Ha! Orwell would be proud.), now the world can watch you over and over again stabbing at America's open sore. Yeah, it's open. Race is the big elephant in the room no one wants to or knows how to discuss. But that's why you have Funkyman.

The word "racist" has become a four-lettered word. It gets tossed around and used to label people as the most evil people on the planet. But it's time to define the word correctly. Racism is an institution. There's a difference between being something (racist) and doing something (prejudiced). For instance, if I say "I hate white people," that is a statement of racial prejudice. However, I can hate white people all day and it will have no effect on them unless I'm in some position to hurt or prevent them from progressing in society. If I were, I'd be a racist. Understand? Hating black people is not racism. Keeping them back or hurting them because of your position of power is. Disliking old people is not ageism - being in position to hurt them and doing so is. Thinking women are inferior is not sexism - unless you're a man who is in position to hurt and hold them back, which most of us are. And even though I want to say "I'm not a sexist," I can't truly recognize my privilege as a man and how I may have used that in the institution of sexism. I may have done it inadvertently. It does not have to be conscious. I'd still be part of a sexist system.

That's why Richards' silly 4-word statement "I'm not a racist." doesn't matter. If it serves the need of the institution, "racist" statements by a "non-racist" are equally effective. If he's not a racist, he did a darn good impression of one. Even he stated that sometimes he improvises on stage and goes into character. Well what character was that? Hitler? Grand Wizard of the Ku Klux Klan? David Duke? I mean really, it was horrible.

The bottom line is, it wasn't funny. The word "nigger" (alert: see above - It's O.K.) can be used in a joke (like that one I just did) or a routine and be very funny. People want to know why blacks can say the word and whites can't, but the fact is, it depends. Have you seen when Will Ferrell did Robert Goulet on SNL and said "nigger?" I can't stop laughing. Have you watched Def Comedy Jam and heard hundreds of black comedians use the word and it's not funny? Absolutely. Have you heard Paul Mooney or Richard Pryor use the word and laugh your head off? Absolutelty. Funny is funny. This was not.

So, Michael, get over yourself. You're not the first person to slip and say a word in public that you've only used in private. I refuse to believe this came off the top of your head for the sake of a laugh. But that doesn't make you an evil person. Apologize to those you said it to (not to America!) and make peace with yourself. I've said plenty of things in private or with friends that I would never want the world to hear.

Hi, i was looking over your blog and didn't
quite find what I was looking for. I'm looking for
different ways to earn money... I did find this though...
a place where you can make some nice extra cash secret shopping.
I made over $900 last month having fun!
make extra money now