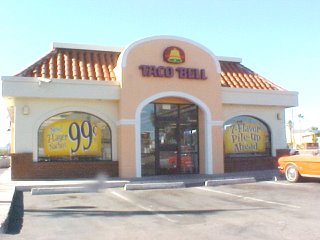 These are people. We can relate to them. (O.K. Chuck is a rat, but whatever!) They make us feel happy, safe and comfortable as we indulge in food that probably isn't the best for us. Probably.

But Taco Bell? There's no person or character urging us to come eat this food. Has anyone ever even bothered to ask "What is a Taco Bell?" Here are some possible definitions:

- A large bell that chefs ring throughout provinces in Mexico whenever tacos are hot and ready. (No)
- The actual bell pepper used in their delicious taco creations. (No)
- A large bell made of tortilla chips that make any party fun! Stuff it with your favorite taco ingredients! Taco Bell - Olé! (No, but a good idea)

No, the real answer is Taco Bell's founder was named Glen Bell. Lucky for him, his last name wasn't Schwarzenegger.

It strikes me that for it's popularity, this fast food chain does not have an iconic figure, some personification of its product, peddling its wares. Yes, there was the dog - "Te quiero, Taco Bell" - but who wants to think about why a dog might be in the kitchen? If Ronald McDonald the clown and friends are so instrumental in their chains' successes, how has Taco Bell managed to stay alive? Well here's the answer that no one wants to admit, but Funkyman's inner voice will.

Oh my God. Have you ever been really hungry and get a couple of hot tacos? So good. How 'bout a burrito? You Know! And don't get me started on Chalupas! Makes me proud to be an American.

Too much of a good thing is too much, and success can get out of hand, especially for a food chain. Glen Bell sold Taco Bell to Pepsi back in the 80's. Since then, Taco Bell/KFC (also owned by Pepsi) two-headed monsters have been springing up all over America. The merger of the two completely unrelated restaurants (Fried Chicken and Tacos? Viva America!) helped keep Taco Bell alive through the last couple of years until we began to see stand-alone Taco Bells doing well again.

Is it possible that in all of this growth and success, some corners were cut? Some details were left out? 64 people get sick because some E. coli got in their scallions? WHAT????!!!!!!

This is a wake-up call. What you may not know is that this week two Taco John's (See? John. A person. I can relate to him. He wants me to eat his tacos. But I digress.) in Iowa got 36 people sick with E. coli as well. Connection? I don't know, but I do know this:

Cook at home. Yes, you're hungry. Yes, you're busy. Yes, you're late. But yes, you need to be on your feet after you finish your meal, and not having your stomach pumped. You have to ask yourself - Is my crazy schedule worth risking my life with this food?

Don't get me wrong. I'll eat fast food again. I'll probably even enjoy it. Probably. (Inner Voice: "IT'S SO GOOD!") But I'll definitely think twice, and thank God for the news reporting incidents like this for that.

See, the media isn't all bad.

I just won a FREE BURGER KING GIFTCARD, this promotion is open for everyone, VISIT THIS SITE to try and win your free giftcard.