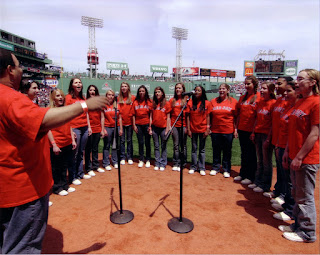 I have talked about a lot of things this year, and I have stated many opinions and predictions. Here's an update on how these issues are faring today:

LOST - Still a great show, I've seen every episode. The series has lost many faithful viewers. The number one reason is lack of plot movement. Well, they're on an island - LOST. What did you expect?

MAURY Paternity Shows - I haven't watched in a while, but you are STILL not the father! LOL. I love it.

Spiderman 3 - Though lots of money was spent on making the picture, it did NOT live up to the hype they started a year ago. How could it? A YEAR IN ADVANCE???!!!

SURVIVOR - O.K., there were no race wars. However, thank God an Asian won. It neutralized the battlefield.

Tufts Gospel Choir - My first semester went so well, the choir swelled to almost 200 in the second semester. Whoa. We had a great second semester, and I'm looking forward to getting back to work with them in the Fall when we will do a tour.

O.J. Simpson - Recently in the news for getting thrown out of a restaurant because they refused to serve him. Anybody feel sorry? Me neither.

Racial Comments - Well Michael Richards is feeling great right now. The circus surrounding Don Imus's comments made Richards' look like an episode of Reading Rainbow. Race is still a huge issue in this country, and even those who say it's not have to start admitting it is.

Fast Food Hygiene - Anybody see that story about the KFC shut down because of rats? Nasty. Just nasty.
Now I have to wait a week before I can order a Variety Bucket. What am I going to do?

Reading - I'm still not reading a book, though I really want to. Let's pray for the summer!

Cartoon Bomb Scares - Not too many lately. Unless you count George W. Bush.

Winter - It's May 17 and Winter is almost over here in New England. That leaves one week for Spring and then 90 plus degree weather for 3 months. Wow. Can we have two weeks of Spring - please?

Lying to Children - I still don't lie to Aimée. However, I think the same's not true for her. Scheming little children! She's still my heart, though.

Only Blonds in the Media - I think they've calmed down a little. I hope it was just a trend.

Online Predators - Popularity of the show is going down. A sign of public sanity?

Red Sox - Above is a picture of my Dana Hall Chamber Singers singing the National Anthem at Fenway Park on Saturday. We had a great time and got a great response, and someone even posted the event on YouTube. It's not the best video, but when I get the professional one, I'll post it myself and let you all know.