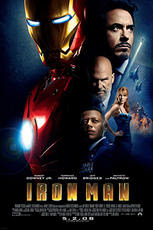 Last summer I wrote about thirsting for fantasy. Click here if you missed it. However, this summer is cooking up to be the most awesome fantasy movie summer of all time. Between sci-fi, fantasy, superhero, and comic book adaptations - it's a fanboy's dream come true - a Candyland of sorts. And I am also a big fan of GOOD comedies, which are in short surplus. However, a couple of those look promising as well.

Iron Man - May 2 - Already saw it. AAMMAAZZIINNGG. No, it's not The English Patient, but for a comic-book superhero movie, it will rank as one of the best of all time. I would pay full-price to see it again - and that's high praise. It ROCKED!

Speed Racer - May 9 - I think I'll wait for the discount DVD rental. It looked cheesy from the beginning, and after reading several reviews, I could tell that I won't be spending $11 to see this one. Nice try, Wachowskis. You created The Matrix, so you're still cool in my book. Now if I could just forgive you for those two sequels . . .

The Chronicles Of Narnia: Prince Caspian - May 16 - Just saw it last night. It was OK. The first one was much better, but I'm a fan of the book series, so I was not disappointed. Nor, however, was I blown away.

Indiana Jones & the Crystal Skull - May 22 - God, PLEASE let this be good because it looks so cheesy. (For more info on the definition of "cheesy" click here.) Raiders of the Lost Ark is one of the best action/fantasy films of all time, and it is at the core of my inner 11-year old nature. I would love to tap into that again (a la Iron Man which ROCKED), but I figure if my hopes start low, I may be happily surprised. I'm rooting for this one.

Sex & the City - May 30 - Not the kind of "fantasy" movie you're thinking of. You people! But, my wife and I are big fans of the show, so of course, we'll be there for the movie. Can't wait - very exciting.

Kung Fu Panda - June 6 - Gotta love Jack Black in anything (except Nacho Libre - what the @#$%?), so we'll give this a shot with my 4-year old daughter. Dreamworks has done OK in the animation department in the past, so I'm sure it's going to be pretty good.

Don't Mess with the Zohan - June 6 - Adam Sandler is a hit-and-miss comedian these days, but I have to say this one looks pretty funny. My guess is it will do very well. Check back in a few weeks to see if my prediction was correct. Besides, how many movies about Israeli soldiers-turned-hairstylists are there? Exactly.

The Happening - June 13 - M. Night Shyamalan - Because he made The Sixth Sense and Unbreakable (one of my favorite movies), I'll continue to patronize his movies, but man has he had some duds - Signs, The Village (UGH!), and Lady in the Water. I'm hoping he can have a comeback with this one, but four bad movies in a row is bad news. Good luck.

The Incredible Hulk - June 13 - Yes, he's back again. A new hulk movie with a more comic-friendly treatment than Ang Lee's 2003 version with Eric Bana. I know we thought Ang Lee - great director, Eric Bana - great actor, Nick Nolte - great villain, what could go wrong? Well on June 13 we'll either have our answer or two films that don't work. Comic book adaptations are hard, which is why Iron Man gets high praise 'cause it ROCKED!

Get Smart - June 20 - TV show adaptations are even harder. But Steve Carell is one of the funniest men alive, so this may work. Keep your fingers crossed. I was a huge fan of this show when I was a kid. Glad to see the characters back.

Wanted - June 27 - Another comic book adaptation about a white-collar working man who discovers he is heir to a life as a super-villain assassin. In other words, I'll be there opening day.

Wall-E - June 27 - Pixar's latest offering. They've done fish, bugs, cars, superheroes, toys, and boogie-monsters. I guess outerspace robots are next. Well, they haven't had a bad film yet, so odds are good they didn't plan on making a bomb. I'm sure I'll see this one with the little one as well.

Hancock - July 2 - Will Smith, the king of the July 4 weekend/Save the World movie extravaganza is back as a Superman-like character who has personality issues. If this movie is not Wild, Wild West, it will make a lot of money. It looks really good, and Will Smith, who was amazing in I, Robot, and I am Legend looks promising as this character.

Hellboy II: The Golden Army - July 11 - Comic book adaptation #4 - Woo-hoo! The first Hellboy movie was superb so of course, everyone is expecting more of the same. I can't explain Hellboy in a sentence or two so google it if you're curious.

The Dark Knight - July 18 - Comic book adaptation #5 - Whoa! Ah, at last Christian Bale returns to reprise as Bruce Wayne in the movie that follows the ultra-successful Batman Begins. And we have Heath Ledger's last performance to boot. This will do quite well. Can't wait, because Iron Man ROCKED!

Step Brothers - July 25 - If you saw Talladega Nights and LIKED Talladega Nights, then this is a must-see for anyone who saw the chemistry between John C. Reilly and Will Ferrell. I want more.

The X-Files 2 - July 25 - I thought the first film was a quality sci-fi movie. I'm looking forward to this one as well, though I am not an expert on the TV series. Anyone who is more qualified, feel free to comment. But since it's sci-fi, I'll be there - a rule that has burned me more than once. Let's hope this isn't one of those times.

Pineapple Express - August 8 - If you saw Knocked Up or Superbad and LIKED those films, then this is a must-see for anyone amused by the comic stylings of Seth Rogen, who stole many scenes in the 40-Year Old Virgin, another one of my favorite movies. He has since proved himself to be a force to be reckoned with . . . IF you're into this sort of thing.

Star Wars: Clone Wars - August 15 - An animated feature that will probably be better than the last three live action ones. Don't sleep on this. Oh, and you haven't answered my last question yet - IRON MAN, BABY! WOO-HOO!!

As you can see, there is a lot to look forward to in the months ahead. I look forward to updating you on how these films fare in the mind of Funkyman, giving you my in depth analysis and profound perspective on Ameican 21st century cinema. Read my comprehensive review of Iron Man below.

"Speed Racer - May 9 - I think I'll wait for the discount DVD rental. It looked cheesy from the beginning, and after reading several reviews, I could tell that I won't be spending $11 to see this one. Nice try, Wachowskis. You created The Matrix, so you're still cool in my book. Now if I could just forgive you for those two sequels . . ."


I'm a grown woman in her early 40s, who used to watch SPEED RACER as a kid.

Do yourself a favor. Ignore critics. Go see "SPEED RACER" and judge the movie for yourself. I've seen it twice, already. Which goes to show how much I like it.

I haven't paid attention to a film critic since Roger Ebert swooned over the excrutiatingly boring "IN AND OUT" with Kevin Kline. That was 10 years ago.

I don't know if you will love or even like "SPEED RACER". But please go see the movie. It was a wild and original experience for me.

Never one to ignore a fellow fantasy fan's advice, I'll see Speed Racer, and I promise to be objective. Look out for my review. Thanks for the thoughtful comment.