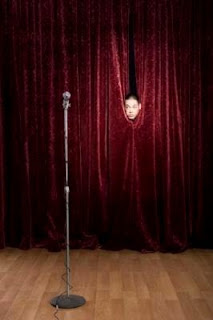 OK, I AM funny, and gosh darnit, people like me!

Now that my insecurity is worked out, it makes no difference if you ARE funny or not - getting on stage and making people laugh is a completely separate talent/skill.

I say talent/skill because for some people it's natural, and others have to work on developing and perfecting a rhythm and delivery.

I have a reputation as being funny in person, and I can feed off of natural circumstances, find the joke, and say something witty that will make everyone crack up. But you see, no one sees it coming, not even me. That's why it works. People often say "You should do stand up." But oh, my friend, no.

When you're on stage - people have PAID MONEY to laugh, and they ARE expecting YOU to be the one to do it. That's so different. I used to work in a comedy club as a musician, and I saw many a man go up on that stage and die. Their friends probably told them "You should do stand up" and you could tell their routines were based on something they had probably used to make their friends laugh. But jokes are more than just "in the moment" laughs. They have to be structured and timed so that they work almost EVERY TIME, and that is no small feat.

So, here's my tribute to 10 men and women who consistently prove themselves comic legends and in my mind, geniuses, for their abillity to make people laugh on command. Mind you, my actual list for this is over a 100 people, so here is a small sampling for blogging purposes.

Ellen DeGeneres - Clearly as funny in person as she is on stage - she is a natural. Ellen's smile alone could make you giggle, even if she were being quiet. But she's way better than that. Her jokes and her cadences are right on, and if you've ever seen her stand up or even "Finding Nemo" you know that you were catching your breath from laughter. Hats off to Ellen - who has to face a national audience almost every day.

Robin Williams - Another pure natural comedian - this guy lives for improv. There's nothing really to say about Robin Williams, because almost every time he tries to be funny - he is. And he is probably the most inane comic ever, a fright for late night talk show hosts who never know where he's going to take a conversation. I'd be scared.

Chris Rock - Now here's an example of skill. I don't think Chris Rock is naturally funny. He can't make a funny movie and his sketch comedy is so-so. But his stand up? HE KILLS. That's technique and timing. He is the best stand up alive if you're rating on skill alone. Just watch his last HBO special. He filmed an entire concert from three locations and spliced them together. You almost can't tell they are three different outfits, theaters, or audiences, because the jokes are told the same way each time, and each time they work. Hilarious.

Will Ferrell - Wow. What can I say? This guy is nuts. I have the Best of Will Ferrell pts. 1 and 2 from SNL, and they're both hilarious. I have Anchorman and Old School on DVD and I could watch them over and over. He has the best characters and lines and he's always trying something new. I know you're saying - isn't he pretty much doing the same character over and over? No, not really. Upon closer look, you will see that many comedians have tried that shtick (Adam Sandler and Ben Stiller for instance - both very funny) but few push the envelope like Will Ferrell does. Will's characters are very different - Ron Burgundy, Elf, Chazz Michael Michaels, Ricky Bobby, Harold Crick (Stranger than Fiction) - all are firsts for character type portrayed in a comedy. And we're not laughing with WIll, we're laughing at him, and that's just the way he wants it.

Jim Carrey - In Living Color, Ace Ventura: Pet Detective, The Mask, Liar Liar, Bruce Almighty - just to name a few. He's been called many things, but if you can't see the genius of his commitment and consistency of his wild characters - even if it's not funny, he stays with it, and you laugh anyway. My personal favorite is The Cable Guy, but if you didn't laugh at any of these in the first list, check your pulse. 'nuff said.

Sinbad - A lot can be said for a modern comedian who does not use profanity. Even more can be said about one who doesn't curse but is side-splittingly hilarious. Have you ever seen Sinbad do stand up? Oh my goodness. I can honestly say that I have only laughed harder once in my life at a comedian. Sinbad is a legend, but the hardest laugh in my life award goes to . . .

Eddie Murphy - When I was 17 years old, I had just graduated from high school and I went to the movies by myself (probably the first time) to see a rated R movie called "Raw." It was 90 minutes of Eddie Murphy stand up. I FELL OUT OF MY SEAT laughing - literally. Eddie Murphy is the finest comic alive, in my opinion, because he is both naturally funny, a genius at stand up, and his voice is amazing - doing impressions that are scary they're so on. Further talent and control over his voice is proven through a moderately successful singing career. He has done it all - adult humor, family movies, TV shows, animation, stand-up, and drama. Wanna see a living legend? Look no further.

Bill Cosby - One of my fondest memories as a child was sitting in the den with my whole family, listening to Bill Cosby "Himself" on LP record. It's a special gift Bill Cosby gave to the world, because while I was laughing and crying with my family, millions of other families across the world were doing the same thing. Thank you Bill Cosby - I Spy, Fat Albert, The Cosby Show (all 3 of them), and hours and hours of priceless stand-up in his unmatched storytelling style. Bill is the Mark Twain of our generation.

George Carlin - Rest in peace, brother. If you don't know who George Carlin is, turn on your television and find any stand-up comedian who's on right now. I can guarantee you that they owe their career and much of what they're able to get away with to George Carlin. The ultimate "truth" comic (if it weren't true, you wouldn't be laughing), George Carlin rips into subjects that would seem poor choices for joke material. There was not a vulgar taboo or politically correct subject he didn't cover, and he did it with intelligence, wit, and an often cutting profanity that made you always be on your toes. We partially owe our ability to question and doubt established "isms" to him.

Eddie Murphy was absolutely hilarious. In 1985. But in the past decade...

True, Matt. However, for every 2 stinkers he gives us, he bounces back with a classic better than 5 stinkers.

In the past decade he gave us:

and though they weren't great movies, I thought Showtime and Life were hilarious.

However, you're right. When the movie's bad, it's really bad. Every movie you mention is no favorite of mine, though I did find Doctor Dolittle funny.

*grins* I like your list, David, but I'd add Jerry Seinfeld and David Cross to the list. The post TV-show Seinfeld's standup just doesn't come close to the pre-TV-show Seinfeld, true, but in his prime, he killed.

David Cross is a more recent addition to my personal list, but I saw him at the DC Improv five years ago, and his timing and delivery were right on. He's more than just a weirdo from Arrested Development or that guy from Mr. Show.

Thanks Jed. Yes, I'm a huge fan of both Seinfeld and Cross. Both geniuses, and I wish I had more time to dedicate to both of them. However, most of the comics on the list I gave have conquered more than one medium, and most have excelled at stand-up, TV, and movies. Neither Cross nor Seinfeld can claim all 3, great as they are.

Good list - I think there are a few I would add.

Your list strays a little from stand-up and into movies. In that light I'd add two guys who are responsible for some comic genius.

On TV - the most consistently funny man (to me) is John Stewart.

As for stand-up comics, I'd add:
1) Steve Martin - he was a real odd-ball behind the mic and damn funny.
2) I was amazed that you didn't put Richard Pryor on the top 10 list. He's up there with Carlin on the whole ground-breaking thing.
3) Lewis Black is awesome. Angry, but awesome.
4) Dennis Miller - love the political stuff

Excellent points and I agree with all of your additions, except I was not trying to compile the "top 10" but rather 10 greats. If I were listing the top 10, Richard Pryor surely would be there and Ellen DeGeneres and Jim Carrey would not. However, I did want to cover a variety of media - stand up, movies, and TV - so you're right that I didn't stick to stand-up - much as my intro inferred. I should have been more clear. Thanks again!