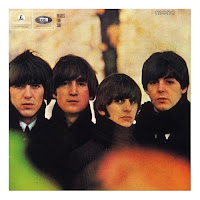 In the continuing adventures of Funkyman, right now my world is revolving around the most significant band in the history of the world - Pseudo Echo.

No really actually seriously, the Beatles.

Now that you know I'm not kidding anymore . . . I've been a choral director for almost 20 years now, and here at the Dana Hall School in Wellesley, I am preparing for an annual concert I like to call a Choral Tribute. In January of every year, our choral concert has a theme, and this year's theme is the Beatles. We will sing 25 songs spanning the 9 years of the Beatles' career, from "Love Me Do" to "Let it Be."

What has impressed me most about this experience is the number of my students who have never heard a Beatles song. I have obviously become an adult and taken for granted that the Beatles' songs were simply common knowledge. I mean, how could you not have heard "Yesterday" right? But, indeed, it's true. Here are some of my other adventures into becoming an adult as I realized my musical common knowledge was actually becoming music history.

Close Encounters of the Third Kind
I used to play a game with my students - "Guess the Movie/TV Theme" - where I would play the theme on the piano and the first person to guess correctly would get a point. Basically "Name That Tune." I would love to play the 5-note theme from CE of the 3K that the aliens used to communicate with the humans (Re-Mi-Do-Do-So). Today, there's not one student I teach that knows that theme. Likewise, a familiar questions is . . .

Who is John Williams?
WHAT???? Come on. OK, I can appreciate if you don't know who Mahler or Stravinsky is, but John Freaking Williams? (He officially changed his middle name - no seriously, no really seriously, OK I'm kidding) The composer of ET? Superman? Jaws? Raiders of the Lost Ark? Star Wars? Harry Freaking Potter? (also official, pending my lawsuit with JK Rowling)

Billie Jean
Another game I would play was more like the original name that tune, and I would use popular music. One day I was playing the opening bass line to "Billie Jean" and not one kid in the room knew it. I was like, "It's BILLIE JEAN!" - expecting an "OHHH, Wow." But what I got was "What's Billie Jean?" This is only to be outdone by . . .

Most Rap Songs
As you know, I am a huge fan of Rap, but like its step-brother Rock, there is a lot to make fun of. One of the things that is an easy target is rap's persistent use of older songs as the inspiration or even framework for the music. This goes back to the origin of rap, when DJ's or MC's would rhyme over pre-existing records at parties. It's just part of the history. Anyway, most young people don't know the origin of hip-hop, and actually believe that the hook in Coolio's "Gangsta's Paradise" was written by Coolio himself, and therefore "See, Mr. Coleman - rappers can write good melodies and chords too!" WRONG. Of course, some rappers can, but unfortunately, most do not. "Gangsta's Paradise" is a sample from "Past Time Paradise" by Stevie Wonder, and when Coolio's version was a hit, I demystified several young people. They ended up hating me because they used to try to play a game and challenge me by trying to find a rap song that was completely original, and I always had the reply of "Sorry. That's actually from . . . " Hey, I still love rap. Just don't call it something it ain't. And it's not my fault I've been alive longer than rap has existed.

All in the Family
One of the most famous piano solos (or I THOUGHT it was one of the most famous) is the closing theme to the sitcom All in the Family. Honestly, when I play that today, not only have kids not heard the theme, THEY'VE NEVER HEARD OF THE SHOW. Carol O'Connor rest in peace and forgive your childern, for they know not what they do. Wow. Ironically, they have heard of the Jeffersons and its theme. Why? - RAP MUSIC!

Here are some other famous quotes from students:

"Rap isn't good music. It all sounds the same and they're always screaming."

"U2 had an album before Rattle and Hum?"

"Rock isn't good music. It all sounds the same and they're always screaming."

"Brian McKnight is SO much better than Stevie Wonder."

"Opera isn't good music. It all sounds the same and they're always screaming."

"I don't lilke rap, but I do like Will Smith, Outkast, Mase, P Diddy, Beastie Boys, Black Eyed Peas, Eminem, and Kanye West. Other than that, I don't like rap."

You and I need to spearhead some sort of popular music history education effort. Some of those anecdotes are just ridiculous. And this one:

Brian McKnight is SO much better than Stevie Wonder.

I told the kid, "Even Brian McKnight would physically assault you for saying that."

I know exactly what you mean. I showed my kids my Beatles Albums. Yes, Albums. I have them all. Not only did they not know what the record was for, having never seen a record player but who are the Beatles? Its amazing and yet humbling

This happens to everyone, ad I imagine it will happen to our generation sooner than it did to our parents', and sooner for our kids than it did for us.

In 1983 I was listening to the late, lamented Boston radio station WCOZ and there was a contest. All the contestant had to do was name the band that did the previous song. It was "Roundabout" by Yes. The caller didn't know the song or the band, but the DJ had to get rid of some tribute band tickets (the Yes tribute band was called, of course, Perhaps) and he prompted the caller by saying "Answer in the AFFIRMATIVE."

The caller still didn't get it. I thought, "I don't even like Yes and I knew that one."

Excellent post, David. The one thing worse than having kids to make one feel old is being around large groups of them.