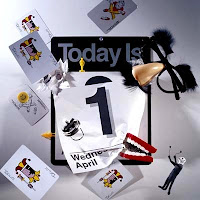 April 1st is considered April Fools' Day, and while I could blog about the history of that commemoration, why should I? That's what wikipedia is for.

However, I can write about my experience with this day, which I have to admit is brief.

A lot of people know me as a teaser and a guy who cracks a lot of jokes, but I have to admit, I've only ever played ONE April Fools' joke - better known as a prank. Now, don't get me wrong, I've played plenty of pranks. But how many people can honestly say they've successfully pulled an April Fools' Day prank? I mean, it's APRIL FOOLS' DAY! Aren't people expecting to be tricked? I think that makes it that much harder.

Now for you readers out there that have successfully done this, I am anxious to hear about your experiences. Please comment. In the meantime, I'll tell you about my April Fools' joke that worked oh so well.

I get my sense of humor from my father. Anyone who knows my father, meets me and is like, "Wow, you're just like your father." Not only do we look alike, but we share several personality traits. My father is the king of pranks. I'll explain.

When he was in college (Howard University), he put vaseline all over the inside doorknob of one of his classmate's dormroom. As he tried to exit his room and discovered the greasy surprise, my father slipped a note under the door. "You've just touched fast-eating acid. Wash your hands in the hottest water you can find immediately." While the student screamed down the hallway and commenced to washing his hands with steaming hot water, my father came into the bathroom and said "Is the water hot enough?"

Another time, the Dean of students was walking through the campus and stopped beneath the window of the hall where my father lived. He and a friend got a bucket of water, and poured it on the Dean, running away for dear life. Of course, the Dean stampeded into the dorm and demanded answers, but as you can imagine, no one knew, and those that did, didn't talk.

Another time, he had a roommate who was an exchange student from Nigeria. One night while he thought the student was sleeping, another friend came in and asked my Dad how was the new roommate? Joking, my father said, "He's alright. I mean I went from having a room by myself to having to share." His friend said jokingly, "Why don't you just kill him?" My dad said, "Yeah, that's a good idea. Then it's back to normal." The next day, the exchange student had moved out and returned to Africa. My dad still feels bad about that one. Some punchlines don't work too well.

Anyway, when my dad graduated, got married and had three boys, he needed people to play jokes on, and of course we were no exception. We enjoyed hearing his stories of his college days and laughing with him, but we noticed that he had no stories of people tricking him or getting him back.

On the morning of April 1st one year, my father woke us up and said "Hey guys, no school today." We were barely awake of course and were elated at the news. We went back to sleep. 30 minutes later, he slammed the lights on screaming "Come on guys, you're late for school! APRIL FOOLS!"

We were late. And we were mad. Mad enough to get even.

We waited one year, and during that year, my older brother and I had some arguments (as brothers do) and my father was constantly getting mad at us and lecturing us to stop. We finally saw a way to get him back.

The following April 1st, my brother and I began to yell at each other. "I HATE YOU." "YEAH? GOOD!" "LEAVE ME ALONE!" "NO, I WON'T!" And then we wrestled each other to the ground and began to act as if this the fight of our life. We could hear my father running through the house top speed. We waited until the last second when he was upon us and looked up at him and said "APRIL FOOLS!"

I wish I had a camera. For the first time probably in his life, my father had been completely duped. I have never been more proud of anything my brother and I ever did. My dad had to smile and say "Wow. OK, you got me. You know I'm going to get you back right?"

It's been 28 years and he still hasn't. Should I relax, or wait for the real reckoning?

I still laugh at that day. Truly perfection.