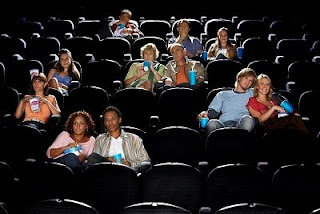 Now that school is officially over this year (last study hall of 2009!), hopefully I can get to the movie theater.

I believe that the movie theater is a therapeutic experience for people who deal with stress in life. Of course, people RELEASE stress in different ways. Some choose to bask in the black of the darkness of the large room with seats, washing over them with a sense of calm, as the larger than life images and sound sweep them into another dimension - helping them to escape and momentarily forget about life's struggles.

They TALK and YELL during the movie.

Now, we've all seen this before. Comedians have riffed on this for decades - how African-Americans have a penchant for yelling out at the screen especially during horror movies.

However, I would do you a disservice were I to tell you that this is a phenomenon only with black people. I have witnessed similar events from people of all races, but they do all share one thing in common - YOUTH.

That's right, young people use movie theaters as the ultimate middle finger to society. They think that if they travel in numbers, (at least 3) they are an unstoppable force - who would dare tell them they are too loud or vulgar in a movie theater when you are scared of the power of their rebellion? Who knows what kind of lives these kids lead outside of the movie? Dysfunctional families? Broken homes? Doing poorly in school? Just broke up out of a relationship? Just lost a loved one? Or just mad at life in general? Where can they go to shout and scream in public without fear of being rebuked? The silver screen.

I know this is true, not only because I have witnessed it several times, but because yes, I too was once a teen. Funkyteen.
And I remember the invincibility I felt when I was with my friends going to the movies. I don't think any adult could have gotten through to me when I was traveling in the pack. However, I have always had a reverence for the movies, and I would always hate to make someone else's experience at the theater a bad one. Maybe it was the artist in me.

Here are some tales of the most blatant examples of what I'm describing.


JUST CAUSE
I saw this ridiculous Sean Connery movie in the winter of 1995 in Times Square. I was on tour with the Boston University Gospel Choir and we wanted to take in a movie together before heading home.

Together. There were about 70 of us. As we convinced the theater to give us a discount rate, we had to promise that we would behave. How dare he! Why would he think 70 college-aged African-American students would do anything but sit and quietly watch the movie? Clearly this is raci . . .

I can't finish that sentence because we got in that theater and acted like straight up fools - screaming and laughing at everything. By the way, Just Cause was a murder drama. While I myself did not participate in the outbursts, I have never been more embarrassed in my life. We were lucky we weren't thrown out of the theater.

But hey, I guess New Yorkers are used to it.


DO THE RIGHT THING
Now, here is a more serious side to racial argument. I saw this movie twice. First, I saw it in a theater filled predominantly with African-Americans. If you know this film, you know that it is set in New York in July, on a street corner surrounded by an Italian Pizza Shop, a Korean Convenience Store, and populated by African-Americans. It is filled with racial dialogue and slurs. At the climax of the movie, one of the locals dies in an act of police brutality and they end up rioting and destroying the Pizza Shop - the central focus of most of the racial tension.

During the riot scene, the black people watching the movie screamed. clapped, and cheered during the riot scene. It was a little disturbing, but understandable considering they either knew or experienced episodes like this in real life. The movie dealt with their own brushes with racism.

However, the 2nd time I saw it, it was in a theater filled predominantly with Caucasians. And during the riot scene, you could hear a pin drop.


SIGNS
It was a hot summer and my brother and I went to see the new M. Night Shyamalan movie with Mel Gibson. This was before the movie was generally panned critically, so the theater was packed to the brim with anxious summer movie heads, looking for a good alien pic. Everyone had their popcorn, candy, and soda, and the lights went down, the previews began, and then here they came . . .

Four kids, no older than 16, walked in yelling already. They basically wanted the entire theater to know they were going to be loud for the whole movie, and they followed through with their promise. They were laughing at previews that weren't funny, and then the movie began and they were openly commenting on everything happening.

One brave man behind us shouted out "Hey, be quiet down there!" The kids responded with "F--- YOU!" but they filled in the dashes with k, u, and c - not in that order. Even more bravely, the man got out of his seat and left the theater to get an employee of the theater. He brought the usher back into the theater, pointed out the kids, and the kids were escorted out of the theater!

I couldn't believe it. Neither could the rest of the audience, because we all clapped and cheered when they left. I'll never know who that man was, but I always remember that he had the courage to do what no one else obviously did. He changed his reality. You don't HAVE to tolerate people ruining your experience.


MOULIN ROUGE
This is destined to be a cult classic in the style of Rocky Horror Picture Show, and maybe this will make its way into the audience participation part. Sometimes, comments from the audience can be well timed and funny. (Mystery Science Theater 3000 anyone?)

If you've seen the movie, you know that Ewan MacGregor and Nicole Kidman play embattled lovers, being forced to keep their love silent so that the rich financier of their play can believe that he is courting the star of the show - Kidman's character.

I saw this movie in a packed house (again), and it was pretty quiet the whole movie until the climatic scene where the rich man inquires during the play rehearsal "Why would the girl fall for the poor servant? Why doesn't the girl fall in love with the rich Sultan?" Ewan MacGregor's character, frustrated by the question and the charade of hiding his love screams out "Because she doesn't LOVE YOU!"

Some kid in the theater with a loud deep voice screamed out "OHHH . . . DAMMMMNNNN!!!" The entire theater erupted in laughter, including me, because it almost felt like it was part of the movie, it was so perfectly timed. So those of you planning the Moulin Rouge showing at midnight this Friday - take notes!