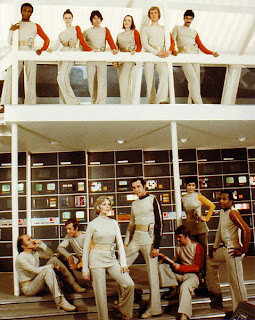 Remember back a few decades when the year 2000 truly sounded like science fiction? In 1968, when Stanley Kubrick offered us 2001: A Space Odyssey, we marveled at the idea of space travel and computers. In 1984, we got 2010: Odyssey Two, a cold war twist which was even more fantastical and bizarre.

But here we are - 2010, and my computer still can't talk to me ("I'm sorry Dave. I'm afraid I can't do that"), I've seen no large monoliths planted outside of my door, Strauss is not blasting in my ear, thank goodness no creepy feti are staring at me, and Europe is still open for tourism.

WRONG
Space 1999 (Pictured above) - I watched this on Saturday mornings as a kid back in the mid 1970's. 1999 seemed SO far away. However, now that we're way past that, let's just say we didn't dress like that in 1999, not even close. We had NOT colonized the moon, still haven't. And if you're going to do a show about meeting and fighting alien monsters, can we at least go more than 20 years in the future? Goodness.

Flash Gordon - Calm down, YES I loved the movie for its campiness and over-the-top acting. It's a classic. But, a rocket ship that can travel single-handedly to another galaxy in like a day? In 1980? Sorry. Fail. This is supposed to be science fiction, not science make-a-wish.

Buck Rogers in the 25th Century - Great idea as the modern Rip Van Winkle story. I think 500 years is long enough to imagine we could have a space colony and contact with other civilizations. Sold.

Star Wars - "A long time ago, in a galaxy far, far away . . ." is the most brilliant line George Lucas ever wrote. It's vague enough to not have to define itself, but the idea that all of this vastly superior technology and martial arts happened in the past, wherever it took place, lend a special gift to this franchise. How many science fiction stories are set in the past?

IN THE MIDDLE
Star Trek - Arguably the best example of science fiction used as a metaphor for current events, this original series was set in the 2100's and that's too close for us to imagine we'll be out in the cosmos on a 5 year mission to seek new life. Maybe I'm a pessimist, but we can't even create technology to take care of our own planet, much less to go looking for a new one.

Are you tired of me rambling on about sci-fi? I know you're saying, "Hey Funkyman, why don't you go fly a kite and see AVATAR?" Well . . .

I WOULD IF I HAD TIME. I'M SO BUSY, I CAN'T GET TO THE THEATER TO SEE A 3-HOUR MOVIE THAT DEMANDS YOU SEE IT IN IMAX 3D! I MEAN HOW ELSE AM I SUPPOSED TO VENT MY NEED FOR SCI-FI? HEROES WAS ON BREAK FOR A MONTH. LOST WON'T RETURN FOR ANOTHER MONTH. FRINGE GOT GOOD ALL OF A SUDDEN AND I'VE NEVER EVEN GIVEN IT A CHANCE. V IS ON EVERY WEEK, BUT I'VE MISSED TOO MUCH ALREADY! SCI-FI CHANNEL PRODUCES GARBAGE STEADILY! WHAT? THEY CHANGED THEIR NAME TO SY-FY? WHAT'S THAT ALL ABOUT!!! KHAAANNN!! KHHAANNNNN!!! KHHAAANNNNN!!!!

Oops, Study Hall is over and my students are wondering seriously why I'm standing on top of the desk screaming at the computer with my fists raised in the air.