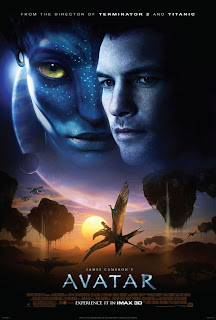 If you have seen Avatar, please read this blog.

If you have NOT seen Avatar, but plan to, do NOT read this blog.

If you have NOT seen Avatar, and do NOT plan to, you need to get out more, really.


OK, I just saw the first movie I've been able to get to in months, and of course I chose Avatar because it's all the hub-bub. I will start by saying, WOW. Ok, now that that's over, let's talk.

Thank you James Cameron and staff for creating visual eye-candy for 2.5 hours. I mean, seeing this in the theater is the only option and if you can see it in IMAX 3-D, even better. It's worth every penny, and I would easily pay to see it twice. Because once this thing hits DVD, it will be SO over. This will look very simple and silly on the small screen.

However, there are a few things that I have to point out that made me laugh about the set-up and plot of this movie. Clearly they spent their time on the graphics and not the story. Everyone is writing about how they've seen this plot before. It's obvious, but who cares. I'm more concerned about details, like . . .

- Avatar is set in 2154. We seemed to have progressed in technology to be able to fly to different planets, set up bases on those planets, create genetically accurate clones of alien life forms, and be able to download our brains into these new bodies, creating a complete union of brain to body. With all of this technology at our hands, how come our leading man IS IN A WHEELCHAIR? WHERE'S THE SCIENCE? And not just any old wheelchair.

Wait it IS ANY OLD WHEELCHAIR!!! This guy is pushing himself along through the military base with his bare hands in a chair like something out of the wheelchair olympics. No motorized chairs in the future? No hydraulic or pneumatic machine to help this man? Come on.

- Jake Sully is given 3 months to find out intelligence about the Na'vi and report back to base before they decide to go in and blow the place up on their own, right? OK, so that means he has to download his brain into an Avatar, become accepted among the tribe, and then learn all of the ways of the tribe, hunting, fighting, linking with a horse, flying a banshee, including their rituals for becoming a man IN 3 MONTHS!!!!!!!!! AND HE PULLS IT OFF???? THESE THINGS LOOK PRETTY HARD!!! WHAT KIND OF TRIBE IS THIS WHERE THE BAR IS SET SO LOW?????? COME ON!!!!!!!

- The military is often portrayed by a one-dimensional, war-hungry, idiotic, non-thinking jerk. Well, enter Colonel Miles Quadritch. I mean, really. Was there any need for this guy to be THAT much of a jerk? What was his problem with the Na'vi again? I just didn't get where his anger was coming from. No one else in the whole movie shared his viewpoint. It was just weird. James Cameron wants to take us to another "world" but then gives us characters that are hard to "believe."

- Neytiri tells Jake Sully that the Great Leonopteryx took a very special person to tame it and the tribe had the highest regard for the person the last time it was tamed. That person then becomes the "Toruk Makto" and brings peace to the Pandoran tribes. It had only been done 5 times in the past. We see this great creature after Jake links with his first banshee and he and Neytiri barely escape with their lives from this gigantic fierce predator of the skies.

So . . . Jake just gets on his banshee one day, flies above the Toruk, and falls on it. There you go, Toruk Makto. Huh?

WWHHHAAAATTTT???!!!!!! DIDN'T YOU SEE THE FIGHT BETWEEN JAKE AND THE BANSHEE???? HE ALMOST DIED TRYING TO TAME THAT THING!!!!!!!! THIS IS THE GREAT UNION??? THIS IS THE ULTIMATE LINK??? THIS BRINGS THE HIGHEST RESPECT??? NO ONE THOUGHT OF THIS BEFORE??? Wow, those Na'vi are keen strategists in the air. come on

- Yes, this movie resembles others in the past. The first that come to mind are Dances with Wolves, The Last Samurai, but I think there is one even more obvious than these. An animated movie with singing. I mean, remember when Neytiri was walking around showing Jake Sully the world of Pandora and how all life is connected and beautiful. I was waiting for her to break into song . . . CUE THE MUSIC!

HAVE YOU EVER HEARD THE WOLF CRY TO THE BLUE CORN MOON?
OR ASKED THE GRINNING BOBCAT WHY HE GRINS?
CAN YOU SING WITH ALL THE VOICES OF THE MOUNTAIN?
CAN YOU PAINT WITH ALL THE COLORS OF THE WIND?

Yes, Pocahontas and Avatar are pretty much the same movie. "SAVAGES! SAVAGES!" For more on that, click here for another funny post.

However, I did NOT hate Avatar, with all of its missteps. It's quite simply the most amazing visual event I've ever seen. Who cares if they didn't give us ONE plot twist or ORIGINAL storyline. The story works, the dialogue is not horrible, and it's awesome to look at, and that's more than I can say for a lot of sci-fi.

By the way, Zoe Saldana deserves an Academy Award. There, I said it.

I'm seeking help for the children of Haiti.

I'm doing this for a non-profit organization that spends their time to
creating oppurtunities for the kids in haiti. If anybody wants to donate then do so here:

They give kids in Haiti a positive outlook through education.

And yes, they're a real cause.

It would be great if you could help

It's most like the film Ferngully. Almost the exact plot if you replace the fairies with the Navi.

I figured it would be a good idea to introduce myself to everyone!

It is my first time here. I just wanted to say hi!

Extremely funny video with a social message. Ghuggi must get a national award for his efforts.

I am going to be adding many things to the site, such as replays, vods, fpvods, maps, live streams, tools, esports info and a lot more. There's a wiki there and really could use contributors to help me out. I hope you guys can register as my goal is for this site to be one of the strongest SC2 sites on the net. Please register soon as there will be a tournament. If you have any suggestions please feel free to let me know!

Thanks! Great board by the way!