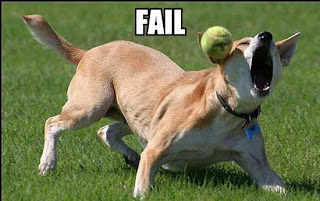 One of my favorite things to do is to create original band names. I have often been caught saying, "That's a great band name" after someone orders something at a restaurant -

Of course, that's NOT a great band name, but you get the point.

Today I invented a really cool band name that I then looked up on Google to make sure it's not already taken. And since only two people read this blog, I'm not afraid of sharing it with you:

Now, coming from someone who directs gospel choirs for a living, I know this may seem ironic. However, rock band names are rarely about positivity and often about rebelling against the normal ideals of society. Everything we do in life is in preparation of suceeding at SOMETHING. It's what we're supposed to do. Even if we do fail, we encourage each other to get back up again. So how perfect is this for a rock band name?

FAIL, featuring their new hit song "Fail" from the debut album FAIL. Now, you don't have to feel so bad when life gets you down. Finally a band that embodies everything you really feel in those low times - FAIL.

"Dude, what did you get for Valentine's Day?"

"Bro, how's the situation in Iraq?"

"Homie, did you hear that new song from my favorite band?"

FAIL - Yes, FAIL is back and ready to rock you into total and complete devastating depression. Rock out to songs like:

- "No Matter How Hard You Try, You WIll Fail"

- And the hidden bonus track for failures everywhere, "Why Are You Still Here?"

Oh wait, those last 5 songs are actually songs. (Actually, the Lady Gaga song is cool, the rest . . . don't get me started.)

Actually, yes get me started. I will say just one thing . . . LIL' WAYNE IS IN THE NEW "WE ARE THE WORLD!" THERE IS SOMETHING REALLY WRONG HERE. We now return to the regularly scheduled adventures of Funkyman.

Of course you do realize the ultimate irony of a successful band named FAIL. Enough negative comedy, onward!

To close, below are the names of every band I've ever been in, listed chronologically.

End Construction - My first band consisted of me on keyboard and Steve Willett on drums. We were juniors in high school and used to get together just to jam but actually got two paying gigs out of it. The first gig was downtown playing on the street while people involved in a race to raise money would jog by. Right next to where we were told to play was a large orange sign that read "End Construction." The rest is history. Literally.

The Others - When I came to college, my closest friend was Augusto Garay and he and I would finish each other's sentences. Because of our ability to do that, people said we were each other's other. Thus our band name. He played drum machine, played guitar and sang lead, and I played . . . keyboards and sang backing vocals. We were only a recording band, though we have over 4 hours of recorded material. This is where I got my early experience with home recording and song arranging.

Revelation - While I had directed gospel choirs before, I had never been a part of an actual Gospel group that did gigs. Revelation was an all-male gospel group who sang songs from Commisioned, The Winans, etc. They were my inspiration for starting my own gospel group years later. The word "revelation" of course refers to the final book of the Bible.

Confirmation - My own gospel group was founded in 1999 and we've done it all - concerts, tours, service work, recording - OK, no videos, but the night is still young. We're still together after 10 years. Not enough time today to explain why I chose this name for the group. For samples of our new CD, check out this link.

Honey & the Bees - The last band I was in also had the most potential for national and international success. I played . . . hmmm . . . yes you guessed it - banjo. No, it was keyboard, but I also played bass, sang vocals and rappped. It was a 4-man band and we played everything from Sting to Prince to Peter Gabriel to Dave Matthews to our own originals. We once opened for George Clinton & P-Funk - a real career highlight for me, being only a funky-child of the funk-master. Fabrice Dupont was our band leader and we had an amazing time. Of course our band name was a little off. Honey & the Bees was inspired by something Fab saw one night working in the catwalk of a nightclub. He looked down at the dancefloor and saw all of these guys circling and being drawn to this girl. He thought is was like bees going to honey and thus wrote a song about it and later named the band that - thinking people would flock to us like bees to honey. The only problem is . . . BEES MAKE HONEY. They're drawn to pollen. Of course, "Pollen and the Bees" doesn't really work so . . .after many debates, we changed the name of the band to . . .

Slant - which is what we were called when I left the band to accept a job at the Dana Hall School in 2001. Fab still won't talk to me.

Hey, that's a good name for a band.

I'm glad a musician of your calibre shares my opinion of Lil' Wayne.

Lil' Wayne is to music what McDonald's is to world cuisine. Lots of people like it, sometimes it tastes good, but nutritionists can clearly assure us it is garbage.

Just like one day you look at a Quarter Pounder w/Cheese and say, "This is killing me," the same thing will happen to Mr. Wayne. Just not soon enough.

I really like when people are expressing their opinion and thought. So I like the way you are writing

I'm looking forward to getting more information about this topic, don't worry about negative opinions.