We Are the Least 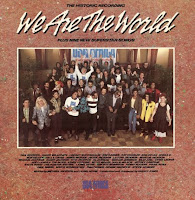 This is a funky shout-out to all of those involved in efforts to help those in need here at home and around the world. Regardless of the debacle of the "We are the World" remake - seriously the worst thing I've heard since I can remember - the intention is correct and God bless them for their efforts. However, if you hear that song and it sounds like it was thrown together in a day - well, it was. The original 1985 version was an instant hit for a reason - it was GOOD. Let's keep the spirit of the both the original and the reanimated-zombie-possessed-version alive as we give.

As I reflect on the world's issues, I truly recognize my blessing, and that God expects great service from me. To whom much is given, much is required, and as we dwell in wealth - freedom, shelter, food, and fellowship - we are called to help those without.

You know, the Bible says - "Whatever you do for the least of my people, you do for Me." But the Bible also says, "Blessed are the meek. They shall inherit the earth."

In God's eyes, the least of His people are not the disenfranchised, poor, imprisoned, or the ignorant. The least of His people are those with education, abilities, and power and/or knowledge of God Himself and choose not to use it to help others. He doesn't only want us with gifts to have mercy on those without. He already holds those people closest to Him in His heart. He wants those who recognize they have less to have mercy on those who refuse to listen to God's word to help others.

If we were to all give unconditionally to those in need, we would immediately end most of the world's ineptitude. I have a saying: "If everybody did something, there would be nothing left to do."

That may be corny, but it's completely true. This is not about doing a good deed - it's about preserving the very life that you love, and spreading the love that life gives you.

World peace thoughts to America, Iraq, Pakistan, Haiti, Chile and beyond from . . .