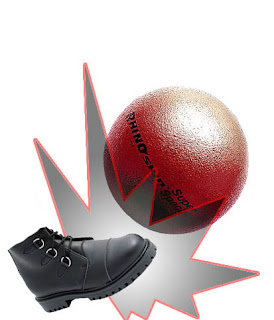 Last year I wrote a blog on different nicknames I've had, but I can't believe I left one out.

My parents gave me the name David Freeman Coleman. David is a Hebrew name that means "beloved." Freeman is my mother's maiden name and speaks for itself. Coleman is an English/Scottish name which means someone who deals or works with coal. So basically, I am beloved . . . free . . . coalminer. Not exciting, I know. I like Funkyman better too. Click here for the origin of Funkyman. But today is not about Funkyman. I have a story about the first nickname I ever got, all the way back in elementary school.


Here's the story. I was in 6th grade. My school was in the inner city of Memphis and our playground was a parking lot - no slides or swings - just a parking lot. Therefore, it was very common for us to play 4-square or just hang out. But when it came time for P.E. the game of choice was - KICKBALL.

P.E. was never my favorite class. I'm not athletic and there is way too much stress surrounding picking teams when you're a kid. And like all classes, there are rules, and some teachers abide by those rules more strictly than others. I had a teacher that was very strict.

One day I got to school and realized I had forgotten my sneakers for P.E. I told the coach, thinking he would let me sit out for that class and just watch. But no, he said "Well then you'll just have to wear your school shoes."

Let me explain to you my school shoes - Black, hard bottom, Buster Browns. That's right - here's me walking outside of the locker room to join my class - T-shirt, shorts, white gym socks and my BLACK BUSTER BROWNS.

But the humiliation didn't end there. As we were walking to the parking lot, someone cracked, "Dag, he's breaking the concrete with those shoes." And Concrete Buster was born. Coach says "Let's play kickball. Marcus and Chris - choose teams." When Marcus picked me, he said - "I'll take Concrete Buster." (HARK! is that more laughter I hear?) Then the game began, and eventually it was my turn to kick. "Come on Concrete Buster!" The kid rolled the ball and I landed a solid kick on that thing.

That ball went so high and so far, it went out of the parking lot, over the fence, and into the neighboring field. The kids were SCREAMING. I ran a home-run in my Buster Browns, and the game was officially over because CONCRETE BUSTER lost the ball. The kids were crying from laughter, and you know what . . . ?

I was laughing too. It was hilarious. I was called Concrete Buster until I graduated from that school in 8th grade. Thank God I started High School on my way to becoming JACKSON, GERSHWIN, and eventually . . .