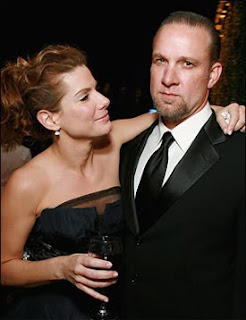 When I was a teenager, I saw Michael Douglas and Glen Close in "Fatal Attraction" and remembered thinking to myself, "Why would he cheat with Glen Close (no offense) when his wife was so beautiful AND so loving?" It made no sense to me. Today however, it makes complete sense to me.

The whole coverage of the Jesse James/Sandra Bullock, David Boreanz, Matt Lauer, Tiger Woods affair thing is getting on my last nerve. I am sick and tired of us acting surprised at the most obvious and common aspect of human nature that dates back further than history records -

"He had everything" - obviously not.

If the previous three quotes are true, then why can't Jesse James answer the simple question - "Why did you do it?"

[Jesse] James admits he shattered a seemingly perfect relationship. I "took a pretty amazing life and amazing success and marriage ... and threw it away by my own hands," he said. But in the midst of his affair, James told Mabrey, he wanted to get caught. "When I was doing it, you know, one, I knew it was horrible, it made me feel horrible. And two, I knew I would get caught eventually, and I think I wanted to get caught," he said. "I know for a fact now what it was, you know. I mean, it was me trying to self-sabotage my life."


Self-sabotage my life? Again, Jesse - WHY? Well, Funkyman to the rescue. The answer is everywhere we look.

On the Internet
"How can we care about others when we don't care about ourselves?" - Funkyman!

In the Bible:
"How can you say to your brother, 'Let me take the speck out of your eye,' when all the time there is a plank in your own eye?" - Matthew 7:4

On a plane:
"In case of a loss in cabin pressure, air masks will automatically be released above your head. Secure the mask on your face first and then help secure the masks on your children." - Your friendly neighborhood flight attendant

On the radio:
"Learning to love yourself is the greatest love of all." - sung by George Benson and later Whitney Houston, and while the sentiment is nice - in truth the greatest love is that someone would lay down their life for his friends (Hey, Bible again) but I digress.


Yes, the truth is that Jesse doesn't love himself, because by his own statements, one who loves him/herself would NOT try to sabotage their life. They would embrace and nurture it. If you love a garden, you wouldn't set it on fire and later say, "I never meant to hurt it because I loved it so much." Your friends would look at the charred remains of your work and wonder what's wrong with you. What's wrong is there is an inexplicable void in all of us. The void is made up of fear, doubt, and insecurity and it is the number one cause of most human failure.

Men and women often use different things to fill the void - video games, gambling, food, drugs, and yes, sex. Somehow we believe that by indulging in these momentary pleasures, we can feel whole and complete - but of course we quickly learn that while they work temporarily, they do not satiate. In fact, we find that the void grows larger and the hunger for these "remedies" increase. It's horrible.

Having fear, doubt, and insecurity does not make you evil, but it certainly can cause you to do things that hurt other people. Yes, Jesse James hurt people - he's not special - so why all the special attention? Just like Tiger Woods, unfortunately this man's failings have to be played out on the magazine covers of the entire world. It's not fair. When your bad day comes, how would you like to face the judgment of the entire world? Especially when most of the world suffers from the same void as you?

And I know what I'm writing about not because I've had an episode of infidelity involving another person, but I certainly have tried to fill my own void with other things (like food), and have had similar results. And yes, you see me mention the Bible a few times in this post because a personal relationship with God has been the ONLY thing that has successfully filled my void of fear, doubt, and insecurity without the "hunger" taking over.

I still have "hunger", but the "hunger" does not have me. That's just my story.

Finding this balance is what Jesse and everyone else has to do so that they can love themselves and THEN be in a relationship with someone else. Unfortunately, Sandra Bullock never saw it coming and didn't know what hit her. I plead with the women of the world - have this conversation with your mates. Learn about and love your other BEFORE getting married. What are their doubts and fears? How do they deal with them? If they don't have God in their life, what do they have?

Temptations and addictions are very real, and they are not your fault. However you must be involved in the recovery process.

Get back what was stolen from you.

You will find that caring about your own life is a side-effect to being in right relationship with all life.

And for the love of God, stop worrying about marriage infidelity in other relationships.

Deal with your own, nurture and grow it, and let it be its own example.

fatal attraction is male or female is in a relationship and they find they are not happy.