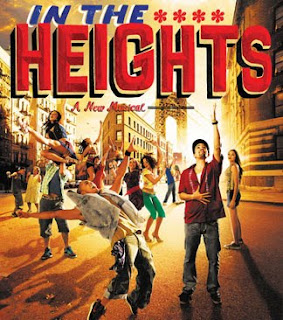 "Something has changed within me . . .
Something is not the same . . .
I'm through with playing by the rules of someone else's game."

Now that the school year is over, I can focus and write about what I was hinting at last month about my "new direction." The truth is that it's a work in progress, but enough mystery - here it is.

When I was a kid, I was taking piano lessons, playing chamber music and being the pianist for the Memphis Youth Symphony, but I was simultaneously playing for my gospel choir at church, playing rock and pop in a band at school, and began writing my own songs. When people asked me what I wanted to be when I grew up, I had no answer . . . until one day . . .

I saw the movie "A Chorus Line" (which I blogged about a couple of years ago), and quite simply, all I could fantasize about was playing piano for that show on Broadway. I didn't need to be music director, and I didn't need money. Just let me play that show, and I'll be all set.

Suddenly, I had purpose for my life and for my music. I finished up high school, went to Boston to major in piano at BU, and halfway through my freshman year of college . . . A Chorus Line went off Broadway. :-(

I didn't know what to do with myself. Long story short, by the end of that year, I switched majors to composition because I was spending more time writing than I was practicing - much to my mother's lament. I began to work as a gospel musician to make some extra money, and that soon became a huge part of my life. However, I had no direction. I had no idea where my musical education would take me. The one job I thought would be cool was gone. Don't get me wrong, I love gospel music, and service became such a huge part of my life, that I defined happiness as being able to help other people and make their lives better in some way.

I am a composer, and when I would offer my pieces/songs to audiences, people would ask me "Why not the music business?" "You should sell your songs!" "Have you thought of sending this out?" My reply would always be "no." I wasn't interested in business - I had heard way too many stories of artists being betrayed by the vultures of industry. I didn't want any part of it. Let me stay an amateur local musician and composer, touching the lives of the people around me. I'm fine with that.

Years have gone by, and I have continued my mission of not promoting myself. Even my group, Confirmation, which sings 100% my original music, can attest that I am not a good salesperson, and that I rarely push or promote our projects or our image. It's not my thing, and I have always stuck to my healthy phobia of business as the reason. Yes, all was well - Married for 12 years, a 5-year old daughter, some great ministries, lots of choirs and concerts, even a bunch of shows to music direct.

And then it happened. The question that rocked my world to its foundation - "How would you describe what you like about music?"

Now that seems like a simple question, or maybe it doesn't. But, it wasn't the question so much as who was asking it and why.

In December of 2008, I was contacted by the American Repertory Theater to offer advice on how to employ local gospel choirs in a production they were doing. Long story short, after 5 months of talks, I was sitting in their office with the composer of the show being asked if I would consider being music director for the show. I was speechless. Floored. And then the question came, and I was still speechless. I sat there on that couch and couldn't answer the question about what I liked about music. I sounded like a babbling fool - referencing the myriad of genres I love and specific artists and even songs - but I couldn't gel a coherent answer together. I left that meeting feeling both exhilarated and devastated. Excited for the opportunity - doomed because I knew I had done nothing but cast doubt on myself in front of the producers.

This began a long and serious depression through the summer months of 2009. I had been walking on cloud 9 prior to this, and suddenly, someone stole my joy.

Why was I upset?

What did I lose?

Why did I care so much?

I ended up being the music director for the show, and it was a great success. But the damage had been done. Even after the show ended, I couldn't escape my funk, and though I am Funkyman, that's not the type of funk I dig.

Then I saw it. The show that changed everything.

Since I worked so hard on the show, I didn't get a vacation during the holidays. My wife gave me an amazing birthday gift - 3 days in New York City, 2 Broadway shows, and solitude. The first show I saw was Billy Elliott - beautiful and amazing, but a little too long. The next day I saw In The Heights, and my world would never be the same. You see not only is this show written with genius, but both Billy Elliott and In the Heights centered around the theme of dreams and what happens when you get the opportunity to fulfill them. When I read the history of In the Heights and how the creator Lin Manuel Miranda spent a full 7 years of his young life working on nothing but this show, and how that work paid off in being workshopped in Manhattan, which led to an Off-Broadway run, which led to a Broadway run, which led to him winning the Tony Award for Best Musical and Best Composer in 2008. In The Heights is perhaps the best musical I've ever seen, and as I marveled at its existence, I began to feel the emptiness I'd been experiencing all year. I began to see that there was a gigantic hole in my life that I had so neatly tucked away and attempted to fill over the years by doing service.

While in New York, I had a great time meeting with old friends who are all musicians. A composer who was just finishing up scoring an episode of Frontline, a producer who was in the middle of producing Les Nubians' next release, a cast member of Broadway's, HAIR (Tony Award Winner 2009), and a few other musicians. One of those musicians is an old student of mine who I wrote about here, who is now a musician and part of the original team for the new musical Addams Family, now playing on Broadway. As we sat together after the show, I told him "You're living my dream." He said "I know." He's only 27 and he achieved what I used to long for, but he worked his but off and paid his dues. He deserves everything he's getting. But it started to eat at me that I had the ability to do what he's doing, and I'VE NEVER DONE IT.

When I returned home, the fogginess in my mind began to clear. I began to admit to myself what I've never wanted to admit, and here it is . . .

I am afraid of the music business - not because of fear of failing, but because of fear of succeeding and having to be judged by people, rejected by people, laughed at by people, despite the quality or my personal faith in my work. I have a LIBRARY of songs that I have written over the last 25 years that literally are sitting on a shelf, and for the first time in my life, I can admit - that bothers me in a big way. If I was content at being a local musician, touching the lives of those around me, WHY WAS I SO MISERABLE LAST YEAR? This is the answer to that question.

I am a pianist. I am a composer. I am a songwriter. I know musicians and connections in every area of the music industry. I just proved that I could be music director of a professional show with Broadway singers. I do not believe that this is coincidence. It's finally time.

From now on, I will do everything in my short life to ensure that I fulfill my dream - my purpose - my desire to produce and promote my music to the masses - not because I desire fortune and fame, but because I've been denying the will of God in my life in this area. This is what I'm supposed to do, obviously. For the first time in a year, I am far from depressed. I have a renewed focus. I am ready to quit everything to make this happen, though prayer and meditation have ruled that out for now. I have the support of my wife, and I have the amazing gift of falling to my knees to ask for heavenly counsel.

The wait is over.

I am no longer afraid.

Prepare to see and hear new music in a new way. I am working on my own original musical, and I plan to finish it before I leave this earth. I don't need Broadway to make it happen, but if that's God's will . . .

Prepare to see and hear a new era for David F. Coleman.

Prepare for the Adventures of

Your music brought me joy years ago and lingers with me to this day. Time to share it with the rest of the world.

I feel the same way. Here I am in New York City and havent gone for my dreams at all....but have merely let them eat away at the vibrant person that I used to be!!!

BUT NO!!! it's never to late...and I hope that I can learn and be inspired by your new journey!!

I'm afraid too.
However, you have inspired me, just being the hilarious, kind, music loving man you are. When I listen to your music and read your blog posts or just plain see you in action all my fear fades away. To me you are an idol a superhero!
I know you can touch the hearts of others through your music. I want you to fallow your dreams! I want you to get all that you deserve and more. You inspire kids everyday. You have given so much over the years.
Keep doing what you love!
and Keep Smiling!