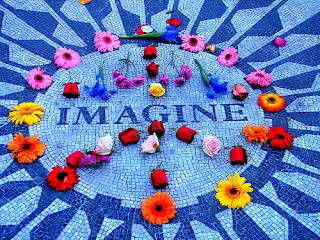 I promised myself I would stay away from this topic, but gosh darnit . . . I just can't leave it alone.

In Superman mythology, there exists a world where everything is backwards. This world is entirely populated by Supermen and Lois Lanes, and logic is completely reversed. You say up when you mean down. You say left when you mean right, etcetera, etcetera . . .

- In a still-to-this-day controversial move, we go to Afghanistan and Iraq for several reasons including "fight them over there so we don't have to fight them here." Several Americans agree. Several disagree.

- While more liberal Americans are concerned with the well-being of our soldiers, the continued violence, and further loss of life, more conservative Americans say this is what we must do to ensure freedom and save lives. They are often quoted as "Conservatives think . . . liberals FEEL."

- People are upset that there is a mosque planned to be built 2 blocks from Ground Zero in NYC. While opposers testify that they are not against Muslims practicing their religion anywhere, they feel this is a bad idea. It's "too close" and smacks in the face of the 9-11 victims and their families.

- Other people are upset that people are upset. The Constitution guarantees the rights of the private land owners to do as they please - regardless of their intention either to bridge differences or laugh in the face of America.

- Our current President speaks out in support of the Constitutional right for anyone to build a mosque near Ground Zero, and a day later comments that he's not supporting whether it's a good idea or not. Can you say "politician"?

- In related news, a pastor in Florida plans to commemorate the 9th anniversary of the slaughter by hosting a book-burning of the Koran - fully hoping this will both capture the attention of radical Muslims, but also incite them to commit further acts of violence - thus justifying his demonstration.


Everything stated above is fact. Now here's Funkyman's opinion - take it or leave it:

The Muslim religion is no more culpable for the terror attacks on 9-11 than Christianity is for the genocide of Native Americans and Africans in the birth of this country. We have to learn to separate an idea from people who use that idea to justify their actions. People used the Constitution to enslave blacks, regard them as 3/5 of a man, deny their voting and civil rights, and segregate. Does this make the Constitution an evil document filled with evil doctrine? There are churches built on the GRAVES of indigenous people, forget about 2 blocks away. Aren't our American churches "too close" to the murders done supposedly in the name of Jesus? I don't want religion to take all the blame for what we do as people. That's too easy.

You know something, I listen to a lot of conservatives today saying "what's happening to our country?" or "we've got to take America back" or "what about the good old days?" Well, if you're a woman, an ethnic or religious minority, or a person with disabilities, the "good old days" were pretty horrible, and we don't want to go back. What's really happening in America is it is being FORCED to live out its own creed, its own laws, its own Declaration of Independence. We didn't write these documents, but we have been conditioned to not only live by them, but be their defenders and their champions. It has allowed America to continually transform into - yes - a different place. And if you liked the "good old days," you should probably make your peace and move forward.

The truth is we must take a step back, look at all of history and its many cultures, and most importantly - pray.

Pray that we can live in a world where murder is NOT the solution for any situation.

Pray that we can all admit that in governments, religions, and in most individual people the POSITIVES ALWAYS OUTWEIGH THE NEGATIVES.

Pray that we can learn to pray together, not only coexist. However, if coexisting is our best effort - so be it.

And EVEN IF someone chooses to use violence to make their point - we cannot respond in kind.

This is what it means to be truly Christian. Not by burning books. Not by screaming at the top of our lungs. And certainly not by denying people the very same rights that allow us to be Christians and not be murdered for it.

This is America. I HIGHLY LOVE AND APPRECIATE THAT I AM ALLOWED TO BE A CHRISTIAN. It's not like this all over the world. What a great country we live in.

Freedom doesn't mean feelings aren't going to be hurt. Freedom demands that if you want to keep it, you have to share it. Even when you don't like it. I want to share God's love with everyone. If I don't, I have wasted my purpose.

If you disagree, that's OK. I still love you, and I am content that freedom of speech is yet another right afforded to both you and . . .

in governments, religions, and in most individual people the POSITIVES ALWAYS OUTWEIGH THE NEGATIVES.

This is a tough one for me. I feel like it runs afoul of the Christian doctrine of original sin/total depravity/what-have-you. (Which, of course, applies to all humans equally, not selectively.) I think I could reconcile the two if I had to, but I'd be curious to hear how you would do so.

Hi Matt, I agree. However, please note that I did not say all people, including me, are "good." Since the price of the world's sin has been paid, it is my position that this indeed is a positive outweighing a formidable negative.

God is in everyone, whether we acknowledge His presence or not, and therefore we have victory at our fingertips when we do acknowledge Him. But since everyone has the ability to denounce sin, that to me is a positive outweighing a negative - not a statement that everyone is good or free from the ability to sin.

Hope that helps clarify - I tend to stray away from preaching in the blog - but I'm not ashamed!