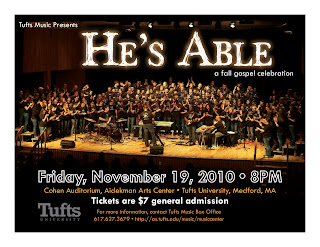 It has been too long, I know, I know. Sorry. I am caught up in life, and honestly, I won't have steady study halls until January, so we'll all have to be a little more patient during this holiday season.

This "holiday" season however, is a MAJOR problem for me.

- Walking into BJ's Wholesale in September and they have Christmas decorations out on Labor Day. Stop the madness.

- Marking UP Halloween candy on the day of. Not cool.

- Sears will be OPEN on Thanksgiving. Why wait for Black Friday, right? Or should I call it "Christmas Shopping Eve"? Disgusting.

I did not log on to write about the darkside of capitalism. Rather, I was inspired to write today because of a Children's Concert I was honored to lead today with the Tufts Third Day Gospel Choir. We had about 150 people in the audience - little children and their families - who came to experience their first gospel concert, and probably for most, their first concert. I was absolutely blown away that when I made the impromptu suggestion that kids could come up onto the stage and sing with the choir, they came! They rocked, clapped, and sang with us, and I was almost moved to tears. I was proud of the choir, and glad it was a success. They did a wonderful job, and they did a wonderful thing for those kids and parents.

It made me think about influential moments in my life, and things that shaped my experience. But rather than list the numerous experiences I've had that have benefitted me along the way, I've chosen ten quotes spoken to me that have forever altered the way I think, live, and love. For each one of them, it's like it was said to me yesterday.

10. "More time to do something is more time to do nothing."
My band director in high school said many things, but none was more true than this. We often complain about how there aren't enough hours in the day or how busy we are, but in truth, we thrive when we're busy. When faced with a task and a lot of time to do it, we often waste that time doing absolutely nothing. Maybe that's not true for you, but it certainly is for me. And even when faced with that scenario, I remember this quote to try to make it not so. I do not want idle hands.


9. "You little thief!"
When I was on the Memphis State University Swim Team (Yes, that's right - I was a MONSTER at the Butterfly), I was only 10 years old. Before and after practice, my friends and I had free time to roam the Sports Complex. The halls were HUGE, and our favorite thing to do was find used handballs and play with them. One day, we couldn't find any, so we decided we would sneak into one of the handball courts and grab one. To get into the court, we had to get on all fours and crawl into the court, grab the ball, and crawl out again. On the way out, I was met by a large man who obviously was preparing to re-enter his court. He looked at the ball in my hand and said the above quote. I never felt so bad in my life. You can bet, that was a word I never wanted to be called again. Thanks to whoever that was.


8. "Now, never smoke!"
My mother smoked pretty frequently when I was a kid. One day, when she and a friend were at the house smoking in the den, I asked "What is it like?" My mother said, "Here, put this in your mouth and inhale." As I was coughing up my lungs, my mother looked me right in the face and said the quote. It worked.


6. "It's more than just about the music."
After the first concert I ever did as a choir director, one of my students came up to me with tears in her eyes and said this. Without telling the whole story, let's just say that during that concert (gospel), many lives were changed for the better forever, including mine. Had that night not happened, I would not be in gospel music to this day.


5. "Discipline"
My English/Music Teacher in Grade School often would stop in the middle of class to teach us something that had nothing to do with the subject matter. One day, he wrote this word on the board and spent the rest of the class talking about how important it was to champion this aspect of our character. Not only was it profoundly true, but it informed the way I teach even until this day. If you want to capture the imagination of your students, teach them from your experience, not just the subject itself. I know it works because it kept me engaged when I was a student.


4. "Now I want to go to college."
Just like today's concert for kids, my college gospel choir at Boston University did a concert for a school, and at the end, one of the kids came up to us and said this. It showed me the power of being present - just showing up. It's quite possible that seeing those young adults singing and praising truly inspired that kid and countless others to strive towards that goal. I never forgot that, and I never second guess the power of words and action in other people's lives.


3. "Stay with the Lord."
For instance, this quote was told to me in passing, and the guy has no clue that it rocked my whole world. It was said to me at a time when I was really questioning my faith, and he couldn't have known that. But he touched my shoulder and said it so sincerely, that it really felt as if God were saying it to me Himself. You can call it crazy, but you know . . . you weren't there, and it doesn't really matter what anyone else believes. I was there. I saw it. I heard it. I felt it. That settles it.


2. "Papa's home!"
First of all, being called someone's father is a priceless gift. But hearing the joy of your child that you have returned to the place where you belong . . . well what two words could bring me more joy?


1. "I do."
Yes, Fadie. The two words that rocked my world the most. Without those words, I could never have heard the two my daughter speaks everyday. Thank you for saying the two words that made my life complete and forever special.


I do not deserve the lessons I have learned from these experiences. And because of that, I'm going to do my best to help others have similar ones. It's the circle of life. Pay it forward.

What words have rocked your world? Humbly submitted by

pretty good post. I lawful stumbled upon your blog and wanted to command that I get really enjoyed reading your blog posts. Any condition I’ ll be subscribing to your maintain and I hope you despatch again soon christian louboutin platforms.