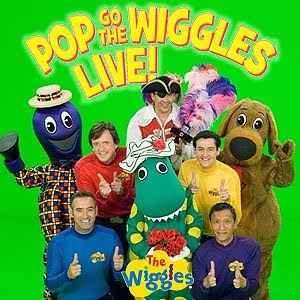 Normally, I would have lots of loving things to say about my daughter, Aimée, but recently I'm a little cross with her. Let me explain . . .

One of the fundamental differences between adults and children is the PERCEPTION OF TIME. A year to an adult can go quickly, but to a child it's an eternity. Likewise, a child's TASTE in things also can change dramatically and quickly, while we adults tend to like something for a long time. This goes for music, food, and . . . TELEVISION SHOWS.

My wife and I debated whether we should even have a TV in the home. It went like this:

Mrs. Coleman: I'm perfectly fine with not having a TV.

I was RAISED on TV and YES I am addicted. Look, I recognize that there is value in the TV being off, and I think I'm pretty good at setting priorities. But life WITHOUT TV . . . FOREVER? I don't think I would survive. Unfortunately for Funkyman, it's like water to a plant. You gotta have it sometimes.

You see, no TV for Aimée meant no TV for Funkyman, and I knew I was thinking of myself when considering my daughter's future TV habits.

Now that I've admitted that, what is there on TV for a little girl to watch - CNN? MTV? A&E? Bravo? No. Lucky for me there was this new thing called NOGGIN.

Yes, NOGGIN - Nickelodeon's all-day and all-night pre-schoolers programming - safe TV with safe commericals and music videos. Pure genius. I could always find something kid friendly at any time of the day, and I didn't have to fast-forward through inappropraite commericals. Of course, PBS is there too, but as soon as the afternoon is over, PBS turns into Nova, Great Performances, Masterpiece Theater, Frontline, etc. Great programming, but not always what a kid would choose. (Side note - my daughter does love opera and ballet, and whenever that's on, she's watching! Yay PBS!!)

But Funkyman, you ask, why are you upset with your daughter? Oh, I almost forgot. Back to our story.

Yes, I sat through episode after episode of children's TV - just like most parents do. At first, it's cute, but then it devolves into aggravation.

"Wow, the Backyardigans are brilliant. CGI, choreography, and great songs!"

"Aww, Blue's Clues is so adorable. And that Steve guy is so good with the kids. Joe however is a little too intense and scary but . . ."

"Dora the Explorer - what a great concept - Spanish and topography for young people. Why is her head so big and why is she always yelling at me . . .?

"Dragon Tales is sweet. But just like Dora, these kids are running around with animals in faraway lands, and HEY - Where are these children's PARENTS???"

"The Wiggles like Fruit Salad and driving in a Big Red Car. And torturing adults."

"Why don't those kids just kick Barney and RUN!!!"

Now, the funny thing is that's not how it ends. What actually happens is - YOU START TO LIKE THIS STUFF. Yes, eventually the aggravation wears thin and those little songs you keep hearing begin to work on your cerebellum, and you find yourself nodding your head to "Fruit Sald, Yummy-Yummy." I began to buy The Wiggles on DVD and found myself appreciating the songwriting and thought behind it. I began to have favorite Wiggles songs. My wife even bought tickets to see the Wiggles live. I was downloading mp3's for my iPod. I bought the Wiggles toy microphone and was jumping around the house doing karaoke to Wiggles songs when . . .

That's right, my daughter got me to like the Wiggles and she ABANDONED ME!!!!!!! I can't see the Wiggles live NOW - some 40-year old man hanging out at a kid's show - the cops would be all over me. I need my daughter to justify my presence! You know what? LATER for the Wiggles, and LATER for you Aimée!!!!

I got over it. I'm not mad at my daughter. I still kind of like the Wiggles though.

God willing, my daughter will continue to grow.

She will get taller, need new clothes.

She will finish school, leave home.

She will meet someone special, and start a family.


And I'll still be here at home with dusty Wiggles DVD's and the desire to spend time with my baby . . . who's not a baby anymore.

But that's life. It's not fair, but ranting aside, I love it.

My thoughts and prayers are with the Green family, who lost their 9-year old princess Christina in Tucson on Saturday, January 8 to senseless vioence - prompting me once again to think about how short life is, and to go run and hug my daughter one more time.

If it's quality, you'll all benefit. Dogs 101, How It's Made, Design Squad, FETCH!, Peep and many others weave science and discovery into the entertainment. -A T T S