A Year With Santa Claus 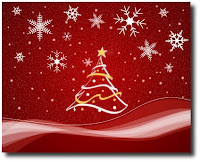 As my loyal readers know, Christmas is my least favorite season. Click here to read why. OK, now that you're all caught up, you'll know I mean it when I say, Merry Christmas! and Bah-Humbug! simultaneously.

Anyway, I'm not here to talk about me (there's a first time for everything!). This is the story of a child. A 6-year old girl. My daughter - Aimée.

Let me begin by saying I am not anti-Santa Claus. I think many of the ideals surrounding the legend are charming and filled with positive overtones. However, just like the Easter Bunny can be fun, it has zero to do with the purpose of Ressurection Sunday (Easter), and there are plenty of kids who grow up never knowing that the Easter Bunny isn't the central figure of the holiday. I have also seen firsthand how the Christmas season can easily become all about gifts and getting, and that concerned both my wife and me.

My wife and I debated whether or not to tell our daughter about Santa. We weren't sure if we were setting her up for a huge letdown later or even if it was distracting from celebrating Christmas as a religious holiday. In the end, we decided that we would not tell her about Santa or the myth of the mysterious ride throughout the night to deliver presents to nice boys and girls throughout the world.

But then one day when she was 4 years old, everything changed . . .

Huh? How did that happen? Never once in her short life had I mentioned or even referenced Christmas as anything but Jesus' birthday.

It was after talking to my wife that I realized how naive we both had been to think we could raise our daughter in a Santa-free world. He is just everywhere. And obviously, she learned about him either from school, other friends, or television commercials. But know this Funkyreader - YOU CANNOT ESCAPE. So the only thing left to do was deal with it. Well . . sort of.

"Why do you want to see Santa?"

"So I can tell him what I want for Christmas!"

"And what do you want for Christmas?"

"And you think Santa can get you one?"

As she looked at me, my heart melted. Here was my daughter wanting a very simple gift, and with a pure innocence and faith, believing it was possible.

"Yes, you've been good. You don't want anything else for Christmas?"

Well, mission accomplished on one front. My daughter doesn't want lots of toys and gifts for Christmas. She LOVES singing Christmas carols. She LOVES picking a tree for the house. She LOVES baby Jesus in our Nativity scene. And she has learned to appreciate the things she has. How could I deny her this simple request? There was such joy in her eyes that I couldn't resist.

It turns out that my wife wasn't on board with the Santa visit. I fought for it, arguing that it would be just a trip to the mall, wham-bam, it's over. She eventually conceded, and it was just as I thought - my daughter stood in line anxiously awaiting her turn, then sat on his lap, asked for the pink telescope, took a picture (very cute), and that was it. Easy right?

I went home that night and went online to look for manufacturers of telescopes for kids. Needless to say, I quickly learned that . . .

I found a small telescope in the gift shop of the Museum of Science for about $20. I then went to JoAnn Fabrics and found pink felt and spray adhesive. I then sat in my music studio late into the night on December 24 measuring and cutting the felt to the specifications of the instrument, and then almost choking myself on the fumes of the adhesive spray as I applied the felt. In the end . . .

That was one of the proudest moments of my life. Not that I lied to my daughter about Santa Claus. But that I was determined to do whatever it took to make my daughter happy. I hope if she reads this one day when she's older, she knows how much her father loves his daughter and if I could get her the moon, I would die trying.

"Papa, I know what I want for Christmas!"

"All I want is a giant Santa!"

What you say? Let me explain.

It seems that my wife likes to thumb through catalogs sent to the house. As she looked through a Pottery Barn Kids catalog one day with my daughter looking on, they found a life-size plush Santa Claus doll, measuring 6 feet in height. Aimée immediately wanted it. However, I knew, knowing my wife's issue with Santa Claus, that this was not going to happen, and I was fully prepared to talk my daughter into asking Santa for something else when . . .

"I think we need to get this for her."

No, that wasn't me talking to my wife. THAT WAS MY WIFE TALKING TO ME.

"WHAT?! What are you talking about? YOU? I thought you had issues about Santa? I had to fight last year just to get a picture with him, and now you think it's a good idea to get this MAN DOLL and have him in the house every day? I don't get it?"

Then it was clear that she too had been affected, because she said, "It's the only thing she wants, and just look at her face."

She was preaching to the choir, but still, I kind of had a problem with the idea of this gigantic Santa doll living in my house. Where would it live? Would we put it in storage after a few weeks and bring him out again next year? What if she gets tired of him?

I knew that I did not want to be coming home in July and that Santa Claus was still sitting there in my living room. Santa Claus chilling on my couch EVERY DAY? I decided to try to meet them both halfway and convince them that the smaller version of the doll was the way to go. Yes, they had an 18 inch Santa doll at a fraction of the cost, and it was something that could easily be put away out of sight if necessary. My wife agreed and ordered the doll. It came in the mail a few days later. All we had to do now was convince Aimée. She basically said "not really" and when she sat on Santa's lap the next time, she said it . . .

My wife was right there again with "I think we need to get this for her." OK!!!!!!! I was so convinced that I could sway her to the smaller version, that it didn't occur to me that this would be a popular item and hard to find. But, DEJA VU baby.

It was two days before Christmas, and it was too late to order big Santa through the mail. We began to call around to the only 3 Pottery Barn Kids stores in Massachusetts - Natick - SOLD OUT, Chestnut Hill - SOLD OUT, Burlington - WE HAVE ONE LEFT.

So there I was racing up 95 North to the Burlington Mall. A man on a mission. GET SANTA. I got to the store, and saw him in the window - just like out of some movie. They took him out of the window, wrapped him in some cellophane, and I was good to go. Sort of.

I wasn't prepared for the trip back to my car. Did I mention that this was a LIFE SIZE doll? As people stared at me walking through the mall with this old man over my shoulder, I have never been so embarrassed. But the real fun was out in the parking lot, trying to fit this CADAVER into my car while police cars drive by ever so slowly - probably getting the laugh of the century.

I drove Santa home, and then it dawned on me - WHERE AM I PUTTING THIS THING? I literally stuffed him into my bedroom closet like I was Jeepers Creepers or something. HILARIOUS NOT!!!

On Christmas Eve, I rescued Santa from the closet and took him downstairs near the tree. I put big Santa sitting upright in front of the tree, so that the first thing you would see coming downstairs was Santa smiling back at you. The next morning, my daughter awoke and was ELECTRIC with anticipation. She just couldn't wait to get downstairs. I tried to savor every second, but I knew that I had to let her off the hook.

I stayed in my bedroom as she began the walk downstairs. She stopped halfway, and I heard the most beautiful GASP I have ever heard. She almost lost her breath as she came running back to my bedroom. "PAPA, I GOT THE SANTA!" Yes, you did, baby. Yes you did.

1. I have decided that as long as I make sure my daughter celebrates Christmas by giving to those in need, loving everyone, recognizing how blessed and loved she is by God and her family, then yes - she may believe that there is an old man who lives in the North Pole and feeds flying reindeer. She's a kid, living out her childhood; and just like her belief in Santa, it won't last forever.

2. That doggone Santa Claus doll has sat in the big chair in my living room for exactly 365 days - even through July.

She's not tired of him yet, and every day that she finds joy from hugging him is a day worth living.

Merry Christmas to all! 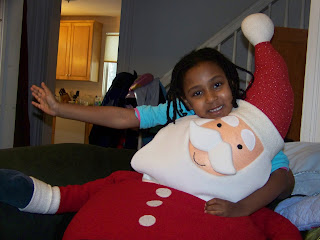 Posted by DavidColeman at 10:56 PM