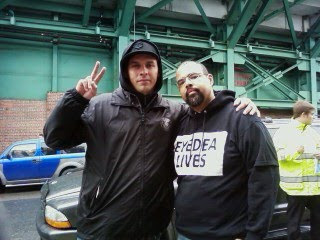 I do tend to write a bit about race. I do not have a chip on my shoulder, but fortunately for me, I don't have to. Because of what I do for a living - working in the arts and in church, I am surrounded by the issue every day, and personally I believe that the only way it's not an issue you think about is if you ignore it. Which begs the question . . .

Is ignoring it exactly what we should be doing?

The ideal world for most people is one in which race is not an issue. Where people are "not judged by the color of the skin, but the content of their character." Thank you Martin. Unfortunately, Martin was taken from us before he told us how to achieve this best.

Should I walk in this life and achieve the ideal world by treating people as if it already exists?

Are those actions actually ignoring the reality of the past and present without acknowledging injustice and inequity and allowing the problems to both persist and possibly worsen?


EXACTLY - you don't know either.


You: Why is this on your mind today, Funkyman?


On Saturday night, I attended a concert at the House of Blues - Rhymesayers Family Tour, with Atmosphere as the headlining act. Atmosphere has been around for about 15 years and is fronted by a rapper named Slug. I got to meet him before the concert, picture above. Slug happens to be bi-racial. That's not particularly important, but what is interesting is that for a rap concert, I was the only African-American person I could see. I didn't expect that. I have been following this group with their music and online for years, but never thought of them as anything but hip-hop.

Is hip-hop segregated? This is a revelation to me!

Yes, I well know the origins and history of the genre - it's in my blood and was born in my lifetime. Yes, I've seen the racial shift from the 80's when rap became the new rebel-rock and kids of all colors began to adopt it as the new edge. But, I really didn't believe that a rap concert in 2011 would have an all-white audience or an all-black audience. I thought it was more universal. Maybe I just need to get out more. Those of you more experienced concert-goers, riddle me this? Is this your experience too?

Tonight, I'm going to see Talib Kweli in concert - one of the best rappers alive of any color (he's African American BTW)- and we'll see if what I experienced on Saturday night was a fluke or a reality-check.

Either way, it doesn't matter to me if the artist or the crowd is black or white - when music is on - we become one.

I wasn't the only black guy at the Atmosphere concert - I was one of 900 people. It was awesome.

Let's try and do that when the music's off too.

P.S. - The Adventures of Funkyman CD Release was dynamite! Thank you to all for your love and support. I will make my next blog entry about that! The CD is now available on iTunes! Just click below. More info coming!

Posted by DavidColeman at 2:44 PM

Right on. As a Asian American girl obsessed with hip hop and rap, I realize I am not the typical audience member at a hip hop concert. But this doesn't change the way I feel about the music. A couple summers ago, I saw Atmosphere in Chicago and the audience was mainly white. I've wondered how I am perceived at such events, but you're right: once the music starts, it doesn't matter. We all hear things differently. We may interpret lyrics differently based on our own subjective experiences, but the beat is our common denominator.

Anyway... Atmosphere and Talib Kweli are amazing. I can't believe you got to meet Slug!

True that Dave, great post! How was the Talib Kweli concert?