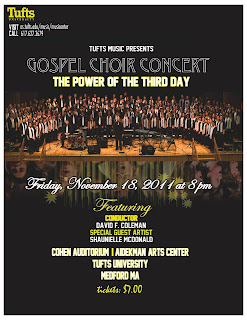 Last night was the Fall concert for the Third Day Gospel Choir at Tufts University. The concert was themed "The Power of the Third Day." And powerful it was. So since you were all there, I don't need to . . . what? What's that you say? You were NOT there? Oh, I see. No problem. Here is what you missed - with links to the original versions of the songs!

"Worship Him" - Based on an old gathering song for the church - "We have come into this house, gathered in His name to worship Him" - I had the choir enter the audtorium singing this anthem in the traditional style and then we broke into the funkier version, arranged by yours funkly. Great power, great singing and great vibe. Great way to kickoff the concert. No links for this one - working on it.

"We Lift Up Your Name" - A Fred Hammond song off of the album "Praise in the House" that was heavily covered when it came out in the late nineties. A high-energy, infectious song. If you've never heard it before, click here.

"There's a Lifting of the Hands" - An Israel Houghton song off of the album "New Season" in 2001. Not the most popular song from the album, but a perfect song for choirs - which are hard to find these days. If you've never heard it, click here.


"Stir Up the Gift" - A Colorado Mass Choir Song from 1998. Another high energy (you see a pattern here yet?) fun song to sing that I have often used to get the audience involved. The audience at the concert did a fabulous job. Big shout out to all of the Third Day alums in the front row! With them singing with us, we had a good 500 people singing at once. Good times. If you've never heard . . . oh you know what to do.


"Well Done" - A Funkyman original led by Shaunielle McDonald - our guest soloist. What can I say? She brought the house down. Well done! Get it? OK, call the obvious joke police. I'm guilty.

"Praise Him" - Another Funkyman original that is the one of the most performed songs I've ever written. I composed it in 1998 with the idea that I wanted a sure-fire way of getting an audience involved in the a song/concert. It has a LOT of words and takes a while to learn, but it works like a charm. So proud of the choir nailing it last night. Well Done! Praise Him! Ha ha ha. "Officer? . . . yes C-O-L-E-M-A-N. No I did not realize how fast my bad jokes were going. I'll slow down."

"I Speak Life" - A Donald Lawrence song led by Elyse Galloway. Another powerful message song from the album by the same name. Elyse did a great job and the choir delivered the message well. Remember - speaking life doesn't cause it to happen. It encourages the listener to live. Speaking encouragement is the one of the most effective ways to make a difference. For anyone who's never heard this powerful song, click here.

"I Am the Resurrection" - The world premiere of Funkyman's latest song went splendidly. A rock-infused anthem that spoke to the theme of our concert very well. Even though we had a false start, we resurrected the opening of the song well. "OK, officer, that was not a joke as much as a pun-styled reference. There is a HUGE difference. What? What do you mean 'come with you downtown'? I've done nothing wrong. Get your hands off of me. Hey! I'm an American citi . . . I have rights! Occupy Funk! WE ARE THE 0.00099%!!!!!"

"You Are" - Originally performed by Darlene Zschech and Ron Kenoly, Kristen Ford put her own touch on a song widely regarded as Contemporary Christian and not Gospel. I spiced up the chords and arranged the choir differently and voila - a gospel song. Very nice job, everyone.

"I'll Never Stop Praising the Lord" - Originally written by O'landa Draper (from my hometown of Memphis!) and led by Shirley Caesar, Shaunielle McDonald returned to the stage and took us home with this one. High energy song that works every time. If you ever wanted to see a man and a choir who inspired me to be a gospel choir director, click here. You will not be sorry.

And that was the Fall Concert at Tufts for 2011. Also, big shout out to Amy Bean and the other students who performed sign language for our concert! I always leave someone out of the thanks at the end, and nobody caught it. So sorry. I love what you do!

I have done a Fall Concert with a college choir 17 times now. It is a great way of finding encouragement and inspiration in a dark time of the year. All across the country, other universities and schools are participating or preparing for their own Fall gospel celebrations. You don't have to look too hard here in Boston - MIT, Boston College, Boston University, Northeastern, Berklee, Harvard - all have student gospel ensembles ready to celebrate victory through song. Check them out! It's not too late.

Now, could someone please come downtown and bail out

Posted by DavidColeman at 3:39 PM