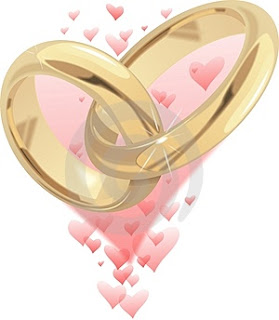 "I Take You To Be My Wedded"
On Thursday, December 1, 2011, my younger brother Anthony got married. A - MAZING

You: Funkyman, why is that so amazing? Is your brother a bad catch?

Funkyman: Not at all. He's a great guy.

You: Then what gives?


"To Have and To Hold, From This Day Forward"
It's amazing because the woman he married has been with him for 15 years, perfectly happy, and the entire world had given up on the idea of them getting married because it wasn't important to them. In our minds and in every practical definition of the word, they were married. You see, in the end, their happiness was all that ever mattered to our family. Of course we are rejoicing for them that they took this step, but in truth, we all would have died happy if they never did - as long as it was what they wanted. Their marriage - correction, their relationship - was never about us.

And this event reminded me that no one's marriage is about me, except my own. I have strayed away from the topic of gay marriage on this blog for a very long time, but it's on my heart and the wait is over. So buckle up.


"For Better or For Worse"
The institution of marriage is sacred to me. This is largely due to the fact that my parents divorced when I was a teenager, and though I knew it was what was best for everyone, I vowed never to let that happen to me - divorce that is. Of course, the best solution to never getting a divorce is never getting married. Then I met my wife . . .

It was difficult for me to think about spending the rest of my life with my best friend with the fear of a possible divorce hanging over our heads. At least it was difficult until I had the revelation:

I am not my father. Fadie is not my mother. Our relationship is not their relationship. Our paths our different. Our marriage will be different - for better or for worse. In truth, I cannot guarantee what will happen tomorrow. However, I can choose (if I'm blessed to wake up this morning) to devote myself to my God and my wife so that I will honor them both.


"For Richer, For Poorer"
A lot of the controversy surrounding gay marriage is centered on the definition of marriage. There are those that believe adding monogamous homosexual relationships into the patchwork of marriage will injure the very idea of marriage itself. The common point made by advocates of gay marriage is 'what does two people of the same sex getting married have ANYTHING to do with your marriage?' I myself had come to define marriage as a holy institution - a relationship between two people that involves a third party - God. I still view my marriage that way. Not everyone shares that opinion/view - and guess what my response is? Who cares what you think? It's my marriage. What does my marriage have ANYTHING to do with your marriage? If the point works both ways, it's a good point.

I will not go into the obvious points of how we heterosexuals have already done an excellent job of injuring the idea of marriage. But regardless of how you feel personally about hetero or homosexual relationships, someone out there right now is falling in love with another person, and it's beyond our control. And control seems to be so desperately what society is trying to hold onto.

I've known people who view marriage as an arrangement. It makes a lot of financial sense to be married if you live with someone. However, those same people are in love-less, life-less relationships and have opted for comfort and stability versus intimacy. I also know people who wait to get married until "we get on our feet financially" - waiting until that right job, right house, right portfolio is set up. Well, to each his/her own, but that's not why I got married. Once I realized that I wanted to die trying to make my relationship flourish with my girlfriend, I couldn't WAIT to be married - money or not. My life was not going to begin until that day arrived.


"In Sickness and In Health"
After divorce, sometimes people consider getting re-married because of fear. Fear that they won't have someone to take care of them when they get sick and/or grow old. I know personally those who got married for this reason alone. I think that's unfortunate, but is that a crime? Not in America.

In America, as long as you're a man and she's a woman, you have the right to get married for whatever purpose you see fit. Because the government has concluded that they cannot judge an individual couple's motives for getting married, just so long as they register and follow the rules.

Now remember, this goes completely against my earlier definition of what I think marriage is. Shouldn't I be protesting the government for allowing this "travesty" to occur? Should I be running for office so I can change the laws and instill my "correct" definition of marriage?

No? You're right. Because if MY definition of marriage were truly instituted - a relationship between two people devoted and committed to a God-centric union - MOST people - hetero or homosexual - would NOT be allowed to marry! Most HETEROSEXUAL couples would have to register as civil unions and I would reserve the title of "married" for the select few who fit the "holy" requirements. How do ya like 'dem apples?

. . . but, no, that's not what I'm going to do, because I cannot judge anyone else's motives for marriage or with who and how they fall in love.


"To Love and To Cherish"
My brother's wife is now legally a member of our family. But my brother's wife was ALREADY a member of my family many years ago the moment they decided to commit themselves to each other and love one another. I cannot express to you the joy in my heart the day he told me he had found someone special in his life. I cannot express it because I already knew how big a deal that was to me when I fell in love with my wife. It's not LIKE winning the lottery. It's better. And if you've been blessed enough to meet someone like that in your life, then I'm happy for you too.

You: Funkyman, aren't you a Christian?

Yes, and by Christian standards, my brother and his wife were "living in sin" for almost 15 years. In fact, I expected his phone call last week to be about how they finally were expecting a child. And if they were pregnant and had a child out of wed-lock, do you know what I would call that child? My family. The status of their sex life does not define their relationship to me.

My Christian brothers and sisters quote the Bible passages relating to sexual behavior - which is the only way homosexuality is referenced in the Bible. We get so caught up in thinking of relationships and marriage as sexual. But sex does not define your relationship or your marriage. When you truly fall in love and reveal your heart and trust with someone - that's not sex. When you hug someone and hold them and tell them "It's going to be OK" - that's not sex. When you nurse your best friend back to health, see them through the hard times, go to events together, laugh, live, love, play and celebrate life together - that's not sex. That's love. And whether Christians are ready to accept it or not, homosexual relationships - especially ones that seek marriage as a life-choice - are founded on love, not sex.

I've found that in my life, and my family and friends are happy for me. When my friends and family find that, I'm happy for them. And even if you haven't found that special person in your life yet, it is my prayer for you to be happy and to be well. My personal relationship with God has nothing to do with how you will experience pain and loss in your life. I won't let it get in the way of your pursuit of happiness either. Whether or not you believe what I believe, I am praying for you. :-)

Hopefully, we'll be together after that too. Amen.