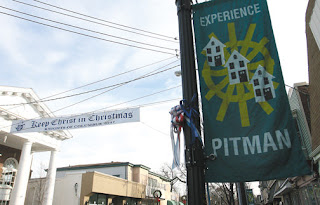 PITMAN, N.J. (AP) A national group is asking officials in the southern New Jersey town of Pitman to take down a banner that says, "Keep Christ in Christmas."

The Freedom From Religion Foundation says the banner violates the Constitution because it was put up by members of the local fire department and hangs from two town-owned light posts over a county-owned road. Officials say a similar banner has hung over the town about a dozen miles south of Philadelphia for the past 50 years.

Co-president of the FFRF Annie Laurie Gaylor said, according to NJ.com, the banner offends "non-believers, Jews, Wiccans and Americans of any religion."

Today, I would like to direct my thoughts and attention to an organization known as the Freedom From Religion Foundation.

I found this news story one morning while enjoying my breakfast and perusing online news stories. It is no surprise to me that every year there are battles being waged over the separation of church and state and how Christmas is a lightning rod for that debate. We have heard of the alleged "War on Christmas," where schools, businesses, and non-religious groups are increasingly intolerant of expressions of any celebration of the religious OR secular practices of Christmas. After reading this story, I visited your website to find out more info about what you believe. The bottom line of my message to you is:

There is a time and a place for protest. America was founded on protest. However, I am not here today to speak against protest or your American right to promote the value of the ideal of separation of church and state. I'm here to argue for the value of tolerance.

The dictionary definition of "Tolerance" is - a fair, objective, and permissive attitude toward those whose opinions, practices, race, religion, nationality, etc., differ from one's own. Yes, tolerance - not only on private property (where most people with your views believe should be the only place religious expression should exist), but in the public square as well.

I continually hear the argument that a prayer or invocation before a graduation is a governmental endorsement of a particular religion. However, I have seen several invocations given by rabbis, imams, buddhist monks, secular/humanist poets, as well as ministers and priests. I would dare argue that the existence of invocations is NOT an endorsement of the ideas or religion of the speaker - it's an endorsement for INVOCATIONS.

An invocation is the act or process of petitioning for help or support or a calling upon for authority or justification. When people gather for meetings of any kind, especially where decisions are being made or a rite of passage occurs, it makes sense that some groups would choose to open with this procedure. However, if they choose not to, that's their prerogative.

If you disagree with a group having an invocation, you have every right to protest. However, if that group feels strongly it should have one - whether they choose to acknowledge a higher power or simply RESPECT the faiths of those who believe in a higher power, that's where tolerance begins. It's not about you.

You see, this is not just a constitutional issue. We Americans have a problem with public displays of faith - especially Christian.

Simply say the words "Tim Tebow" and we already know that when someone expresses their faith in public, it rubs people the wrong way. Everyone is scratching their head trying to figure out why it bugs them so much.

Christianity actually is WAY more than the sum of these strikes, and it's enduring legacy is because of the true heart of the faith and what it means to mankind. But regardless of how we feel, Tim Tebow has both an American right to say he loves Jesus Christ and a golden opportunity to use national and world-wide media to express it. We might hate it, but he's not wrong. We have to tolerate it.

A banner hangs on a street that says "Keep Christ in Christmas" and the FFRF has gone on record as saying this is offensive to "non-believers, Jews, Wiccans, and Americans of any religion."

I mean, leave the Jews and Wiccans out because you already covered them in the following group. And after Americans of any religion and non-believers, who exactly is left? Therefore, you're basically saying this banner is offensive to EVERYONE? Really? A banner that has been hung in the same town for 50 years? I guess the owners of that banner are just like "Hey let's offend everyone again this year and hang it up anyway!" Is that what they're doing? Of course not.

If the idea of seeing the word "Christ or Christmas" during the holidays is offensive to you - whether in the public square or not, I would dare say this is not an issue of separation of church and state, but of tolerance. If one were being "fair, objective, and permissive" - one would understand that it's Christmas-time, and people celebrate Christmas. This is not a stretch. If for any reason you don't share in that celebration, certainly you should tolerate it. You protest because one side of the street it hangs on is not private property and that it's in clear view of anyone on the street? Come on guys. It's not a government endorsement of Christianity. It's a government recognition of the freedom of expression. Before you jump in and respond, here are a couple more thoughts, and I'll close.

About 25% of Americans are either non-Christian or non-religious altogether. I agree that just because the majority of Americans are Christians, we should not be allowed to dominate the nation's discourse with our faith. However, rather than spending your energies fighting something as harmless as this banner in New Jersey, think about this:

VEGANS
About 1% of Americans are vegetarian or vegan. Most vegans consider their choice to refrain from meat and dairy products as more than about health. It's a doctrine. However, they are bound by tolerance to live in a world surrounded by a meat and dairy-glorifying culture. They have to shop in stores and markets where there are butchers, eat in restaurants where people are ordering steaks medium rare, and have to consistently hear and watch advertisements, movies, television shows, books, etc. where people with the COMPLETE OPPOSITE DOCTRINE revel in their status of the majority group of carnivores. Certainly several of them are disgusted, offended, and made to feel uncomfortable by these displays of meat-eating. Is that fair? Nope. But they tolerate it.

Should we amend the Constitution and put in the Vegan Amendment?:

"Congress shall make no law concerning the establishment or promotion of animal consumption."

No? You know why that's not in the Constitution? You guessed it. But that's about how silly protesting this banner is.

POLITICS
Roughly 70% of Americans affiliate with a certain political party, each half (35%) having COMPLETELY OPPOSITE views on the world as another party. Yet, when the majority of that party holds seats in the government, the other side has no choice but to tolerate it, even though they may be protesting in the meantime.
What we do NOT do is say it's UNCONSTITUTIONAL for them to express their views or make laws based on them.

And as I said earlier, protest is important. Atheists should demand respect for their viewpoints. But just like us religious people have to be embarassed by the actions of members of our faiths, so should you. If you continue to fight against banners and nativity scenes simply because they are in clear sight of everyone, Christian or not, I believe you are doing a disservice to your organization, which stands on a very real and important ideal.

By the way, the concept of separation of church and state is NOT Freedom FROM Religion, no matter how you spin it. The First Amendment is for non-religious people too, but just as Buddhists must tolerate Christians and vice-versa, you have to tolerate us. I mean . . . we tolerate you. :-) There is no line in any official American document or letter from a prominent Founding Father that states Americans have the RIGHT to freedom from religion. The stance of "what about my right to NOT hear about anyone's God?" is not rational or logical. You are free to be atheist or non-religious, but to imagine you could live in a world free from public displays of faith . . . Where does it end? With this viewpoint, one could argue that simply having to SEE a church on the corner could be offensive to someone who doesn't practice that religion. Isn't that a little nuts? I thought you would agree.

So please continue your efforts in arenas where separation of church and state matter - at the federal, state, and local level with issues where real financial, social, and constitutional problems exist. Not because someone wrote you a letter saying they felt uncomfortable because they saw the word "Christ" and "Christmas" in the same sentence downtown while they were shopping.

Posted by DavidColeman at 4:52 PM