A Year in Hip-Hop 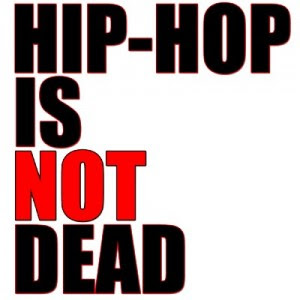 Hello Funkatricians, long post ahead. If you want to learn more about Hip-Hop, keep reading. Otherwise, see you next week!

Because today's topic is NOT my adventures with my own concerts and music, but rather the concerts I attended in 2011. People often ask me,

"Funkyman, what kind of music do you LISTEN to?"

I've always despised that question, because I, like you, listen to many kinds of music. In fact, I wrote a 7-part series of blogs about this a few years ago entitled "A New Era" that spanned all of my musical tastes (December 2007 - April 2008). Click here for a sample.

Often, I'm the one on stage. I perform several styles of music in a year - gospel, musical theater, hip-hop, pop, classical, jazz, etc. Because I'm a musician, I know a lot of musicians as well. In 2011, most of the concerts I attended were because of friends, colleagues, or family I knew that were participating or performing. But then I suddenly realized that the only kind of concert I attended where I didn't know the artist personally is:

Does that mean that in my free time I favor one kind of music? Not really. Let me break it down (Get it? Hip-Hop? "Break it down?" Fine! Anyway . . .)

A) Though I did when I was younger, today I don't like paying ridiculous amounts of money to see a live event - Hip Hop or otherwise. This means I rarely go to large venues for commercial music artists. (Sorry Lil' Wayne. Actually, I'm not.)

B) Since I prefer smaller venues, one of things I try to avoid is mosh pits. In college, I went to a lot of clubs to hear bands and was disenchanted with the number of drunk teenagers slamming against me in an effort to start moshing. I know people still don't do it that much, but I was pretty done after that.

C) I have seen several rock acts in large venues and small clubs, but not a lot of Hip-Hop. I'm trying to catch up.

D) Honestly, the Hip-Hop culture of the mid 90's was a little dark and intense for me. I loved the music, but was not interested in seeing it live.

E) In the year 2000, after become weary of commercial rap, I began desperately searching for underground Hip-Hop artists, and I found them. I fell in love with music that most people either don't know about or don't care to because they do not fit the commercial format - especially groups that championed old-school rap.

When I wrote about Hip-Hop years ago, I covered a little about what's right and wrong about the genre. Click here if you missed it.

But, enough of my yakking. Here is a list of the concerts I saw this year right here in good old Boston, and links to video clips so you can get a taste.


LYRICS BORN
Lyrics Born is a Japanese-American rapper out of California and ever since I discovered his music back in 2003, I've been a loyal fan. Lucky for me, he came through Boston in February of 2011 and DESTROYED Brighton Music Hall. I got to meet him too, which was a plus. I also met two local opening acts - Dee Tension - a legend in the Boston music scene and a DJ at WFNX, and MC Kabir - a prolific hip-hop artist who like me, is a teacher by day. Here is a sample of Lyrics Born music, but there is WAY more than this, of course. This is a satire of the rap industry.

It was a great concert, though I was discouraged by the poor turnout from the crowd - only about a 100 or so. It had been a while since I had been to a concert, so I thought maybe that's just how crowds are with hip-hop. Oh, how wrong I was.


ATMOSPHERE
In April, I went to see Atmosphere at the House of Blues and it was jam-packed with people - over a 1,000. This picture is actually from that evening. 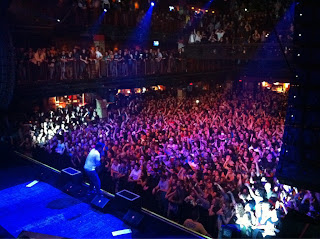 I'm in that crowd, believe it or not. I wrote a bit about the experience. Click here if you missed it.

The opening acts were Sab the Artist, Grieves & Budo, and Blueprint - all from Minnesota, and all very talented. Sab had the least effective set and recited a few songs about how much he loved to drink. Grieves & Budo were electrifying - Grieves is the rapper and had great command over the crowd and Budo is a multi-talented instrumentalist, acting as trumpet player, keyboard player, and DJ all in one. Very impressive. Blueprint had a very short but very powerful set, and he is a profound artist worth paying attention to. I've been a fan of his for almost 10 years, ever since I heard him guest on an Aesop Rock song. (Aesop Rock is in my top ten list of most impressive MC's ever.) Check out one of his videos here. If you watch ANY clip on this blog, watch this one. Profanity aside, this message is why I began to stop listening to the radio and start supporting independent artists.

But of course, the main event was Atmosphere, featuring the rapper who goes by the name of Slug. They are a legendary group (meaning they've been around for a LONG time) and they have created their own music label and fan following. They are the blueprint for how to do music correctly, without getting eaten up and sold out by the industry. They stand out in a unfortunate category known as "white rappers," of which Eminem is often considered the king. However, all rappers, regardless of color, have their own style and their own perspective. Slug is a king in his own right.

I first discovered Slug after becoming a huge fan of one of his collaborators, Eyedea. In 2000, I discovered Eyedea on HBO (when HBO used to feature unknown artists). Eyedea is quite simply the greatest freestyle rapper I've ever heard - meaning he creates his verses in real time with no rehearsal. In this picture of me with Slug, you will see his name on my shirt. 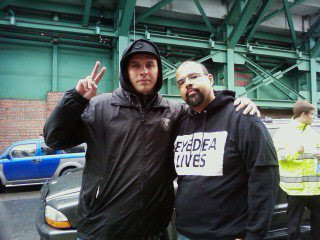 I only lament never being able to see Eyedea perform live because late in 2010, he passed away at the very young age of 28. If you want to see a little bit of what made him a genius, watch this - and remember, he's making this stuff up off the top of his head.


TALIB KWELI
Later in April, I saw another one of my favorite rappers, Talib Kweli and got to meet him as well. (He signed my Funkyman CD! Gush!) 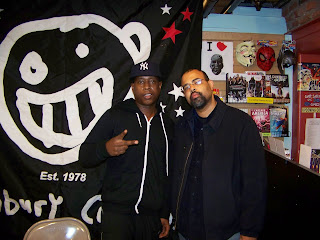 Talib Kweli hit the scene in the late 90's with Mos Def in a project called BlackStar - an album which every hip-hop fan either has or wishes they did. They stood out as young East Coast (Brooklyn!) rappers with a strong consciousness message and absolutely fresh voices and abilities. Mos Def went on to make one of the greatest records of all time - Hip-Hop or otherwise, called Black on Both Sides. Talib was also quite prolific with his future projects, though never reached the iconic status that Mos did. However, his skills never faded. His latest album, Gutter Rainbows, is one of his best. Here is a clip:

The concert was at the Paradise, and a good friend turned out to be Talib's bass player (Brian!) Talib was on point in his control of the mic and he brought along Jean Grae - an amazing talent you should check out. She is one of the only female rappers that I respect for lyrical depth and ability. (Sorry, Nicky Minaj. Actually, I'm not). The opening act for Talib Kweli was a guy also from Brooklyn called Fred the Godson. He's up and coming but his set was unbalanced and felt out of place given the amount of profanity he spit out in a short amount of time. He did have a funny moment where they staged him having a heart-attack on stage because he's overweight, and then they broke into a song called "I'm Too Fat." It made me simultaneously smile and frown remembering the faded glory of the Fat Boys - great talent, but short lives due to their health. I pause to be grateful for my health.


PEOPLE UNDER THE STAIRS
In June, I caught a group I didn't think I would get to see live. Another underground rap success story from California, the PUTS also played the Paradise. They are champions of old-school rap - nothing too serious, just good music to have a good time. If you're looking for that, give them a listen. Here's a clip:

Opening act was Los Wunder Twins Del Rap, featuring Dee Tension again. My favorite part of their set was a cover of "Beats to the Rhyme" - one of my favorite Run DMC songs.


MOS DEF
In December, as luck would have it, the other half of BlackStar came to Boston to play the Wilbur Theater. A rare treat for Hip-Hop fans - Mos Def in concert. Mos Def had such success with his first solo album, he became a cultural icon. He was featured in Hollywood movies, Broadway plays, HBO specials, etc. However, like many artists, creatively, he peaked too soon, and while no one can ever take away his genius and talent, nothing he's done since that first album has lived up to its impact. Therefore, most people that night were expecting him to roll out several songs from that well received project.

Mos goes by the name Yasiin Bey now, and wants to put that era of his career behind him. He did do a couple of the older songs, but he left the audience scratching their head with a very long wait and a very short concert. Fortunately for this Hip-Hop fan, there were two stellar opening acts from Boston - a rapper called Moe Pope and a band called Bad Rabbits. Mos Def clips are easy to come by, but check out Bad Rabbits & Moe Pope together on this track:


THE ROOTS
The day after Christmas, the legendary Roots crew took the stage at the House of Blues and restored my faith in Hip-Hop, Music, America, and Mankind. There is simply no one like them and they have been around a long time - pioneers of this crazy idea called live music in Hip-Hop. I could dedicate a blog to them alone. How many rap groups have a sousaphone? A human scratch man? Have been featured on Yo Gabba Gabba? You may have seen the Roots on TV because they are also the studio band for Jimmy Fallon's show on NBC. However, here is a clip of them 17 YEARS AGO - they were killing it then, and they're even better now.

And that's the way it was for 2011. I hope if you stuck with this post this long, you find some time to kick back and listen to some of these artists. And if you become fans or even better get to meet any of them in the future, you can tell them you were introduced to their music by