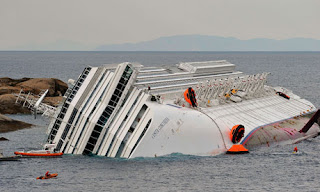 I have been spending the last three years engrossed in online media - news websites, blogposts, independent YouTube channels - that span the range of liberal to conservative, atheist to fundamentalist religious, and the random stories that are covered in the news. The internet is amazing in this way - we have more access to more information than we ever have in the past AND the ability to communicate with absolute strangers as well as reconnect with old friends. Pretty amazing.

That being said, I see a lot of intelligent writing and a lot of beautiful stories out there. However, as you know I also see a LOT of FAIL. Here is my list of the biggest recent FAILS in the news.


FAIL #1: Schettino & the Costa Concordia
Death tolls reached 16 yesterday in the cruise ship now infamous around the world, captained by the name now SYNONOMOUS with FAILURE - Schettino. What does that feel like? I mean, everyone makes mistakes, right? Well, some mistakes are worse than others.

When you are the captain of a vessel that has 4,000 people onboard, you are held to a different standard - a higher standard. Are we being too hard on this man? Well, we'll find out when all of the facts are settled, but from this viewpoint, it's looking pretty bad. Failure, Schettino is thy name.


FAIL #2: Boston Bruin Tim Thomas & the White House Refusal
So it is tradition that the office of the President honor the winner of the Stanley Cup by inviting them to the White House and greeting them in person. Dear Tim, your statement about your reasons for not going to Washington are hypocritical. You said you oppose "out of control" growth of the federal government that threatened "the rights, liberties, and property of the people."

"This is being done at the Executive, Legislative, and Judicial level. This is in direct opposition to the Constitution and the Founding Fathers vision for the federal government," the statement said. "Because I believe this, today I exercised my right as a Free Citizen, and did not visit the White House. This was not about politics or party, as in my opinion both parties are responsible for the situation we are in as a country. This was about a choice I had to make as an INDIVIDUAL."

So . . . it's not about politics but you blame both parties? You mention rights, liberties, the Constitution and the Founding Fathers. That sounds pretty political to me. And what does the role of the government in our plight as a country have to do with being honored for your achievement by the office of the President? Tim, you're right that it shouldn't be about politics or party - it's about honor and team - two things you seemed to ignore. You say you had to make this choice as an INDIVIDUAL. But you didn't win the Stanley Cup as an individual. You are a team.

It's not about you.


FAIL #3: The Republican Party
I'm not trying to show bias toward any political party, believe me. However, the Democrats already have their candidate chosen and therefore, the Republicans have been center stage for half a year now. Quite simply, this is the most ridiculous cast of characters the world has seen from a party that clearly doesn't know what it wants. Front-runner Michele Bachmann, no front-runner Rick Perry, sorry no, Herman Cain is leading, wait Newt Gingrich, huh?, but Romney is the inevitable candidate, but wait Santorum wins Iowa, Newt's coming back and . . . I could write 10 blogs about Herman Cain alone and don't get me started on that Rick Perry "I'm a Christian" video. They all agree on one thing - "Anyone but Obama." However, they are so busy tearing each other down, that by the time their primary is decided, it's quite possible, there won't be much left to salvage. They need to get their act together and help give Americans something to think about and choose from, or the choice will be painfully simple.


FAIL #4: The South
It seems that my home state of Tennessee is the epi-center of the end of the world. I don't have time to go into the details of the decades of racial tension that has created the current circus that is Southern politics, but go and Google "Memphis School Consolidation" or "Teen Pregnancy Epidemic" or the recent attempt from the Tea Party to erase Slavery from the history of our Founding Fathers, or the Georgia teacher who assigned math homework with slavery questions, or the Texas social studies rewriting . . . etc. etc. etc.

But wait, hurry up and look up these stories on Google or Wikipedia while they're still running because . . .


FAIL #5: SOPA or PIPA
Simply put, all of the great news and stories I've been able to read would become subject to censorship and outright obliteration were these bills to be passed in Congress and Senate, respectively. As you've already seen, news and history is left to the mercy of a fallible human being. But if that human being's failure happens to be acting on prejudice, we end up failing history and therfore dooming ourselves to repeat it. Attempting to stop people from trying to share or "steal" materials is a no win for all of us. Want to stop online piracy with a bill? You may as well shut off the internet altogether. There's got to be a better way. Next thing you know, there will no longer be an Adventures of

No no we don't want to go without the Adventures of Funkyman.