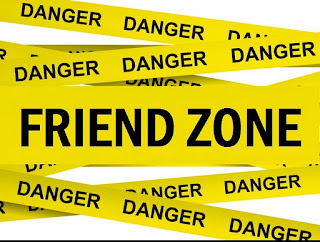 Today is Valentine's Day, and everyone is talking about whether or not it's a good thing. There are two popular schools of thought:

- It's an overdone, commercial day, and recognizing it is actually an insult to your loved one.

- It's an overdone, commercial day, and I don't care - you better get me something.

However, for those of you out there who celebrate the day with your "boo" and enjoy having this special time to show affection - that's awesome. This blog is not for you. No, this one is for those of you who have suffered or are suffering from spending time in the FriendZone - the situation when you want to take your relationship to the romantic level, but she/he doesn't reciprocate that feeling.


Welcome to 1983! Some of you may not have been born yet. But others of you, remember that new Michael Jackson album "Thriller"? I LOVE "Billie Jean" and did you see him do the Moonwalk? Awesome. Hey remember the dance last week and the DJ snuck in Prince's "International Lover"? The teachers were like "Who is this singing?" LOL. Hey, is Mr. Roboto really a robot or is it just Dennis DeYoung disguised as one? Both? Whatever. Can't wait to get home and play Super Breakout on my Atari 5200. Dude, you can PAUSE the game! It's crazy! And if I finish my homework early and watch Dukes of Hazzard, my parents are taking the block off of cable and letting us watch HBO too. No, not Eddie Murphy's Delirious - some documentary, but I'm going to try to and set the BetaMax to tape it when they go to sleep!

Hey, what are the girls talking about over there?

Girl 1: "We were just talking about marriage."

Girl 2: "If we had to marry someone in this class, who we would marry."

Girl 5: "If I HAD to marry someone in this class, then David."

ALL GIRLS: "But we don't want to date you now."


. . . AND we're back. OK, that was frightening in its reality wasn't it? I took you back to there to show you the day I learned not just what those girls thought about me, but how they thought about guys in general. Why was I the guy they would marry? Because I was not the "bad" boy. Because I did well in school. Because I was the . . . FRIEND. You see, girls are smart - they know who would be good for them - but they also know they want more. They want excitement, and I . . . was . . . not . . . exciting.

Yeah, I played piano. Yeah, I collected comic books and talked about Dungeons & Dragons. Yeah, I was 7th Grade Class President (traitors!). Yeah, I did well in school. Yeah, I went to church. Your basic nerd.

And yes, I had VERY little experience dating girls. But how was I going to get experience if they all had their minds made up that after they were done dating every guy on earth, they would "settle" down with me? Without going back in time, here are some highlight quotes from girls I had feelings for in my life:


You see, I had a bizarre theory as a young man that if I was friends with a girl first, love might blossom. But to no avail, I never had a short or long-term romantic relationship with anyone. Always in the FriendZone, I began to realize the silver lining of my status:

- I was single - I could do whatever I wanted whenever I wanted without thinking of someone else.
- I had no STD's.
- I got to know how women think and feel in a way most men never get to.
- Maybe I was being saved for someone special?

Even though being in the FriendZone actually had its benefits, nevertheless one day

I gave up on believing that I would ever be anything more than a friend to a girl. I was tired of getting my heart broken, and I'm such an emotional creature that I couldn't bear it anymore.

I'll end this story simply by saying that just when I gave up on finding someone special or having a romantic relationship with someone who was also a friend, both happened without my trying.

And though I tried to increase her interest in me by cracking jokes, playing piano, or singing songs - none of it phased her. She looked beyond my reaching out and saw something within, prayed to God that I could be the one He made for her, and He answered her prayer.

That's right, Fadie - I love you. God made us fall in love. On March 3, 1994 I asked you to be my girlfriend - tempting all of fate one more time to have my heart broken.

18 years later, we're still here doing what we vowed to do - growing "older" together.

Liberating me from the FriendZone is the very least of what you've done for me. You are my best friend, and we're in love. It's the answer to my prayers too. Happy Us Day. I will forever be your David, but to the rest of the world, I will continue to be

"More Than A Song" - one of the many dedications to my wife, Fadie Thomas Coleman from that sappy, nerdy man she blessed by saying "I Do".

Posted by DavidColeman at 3:40 PM

Trying to find the Best Dating Site? Create an account to find your perfect date.